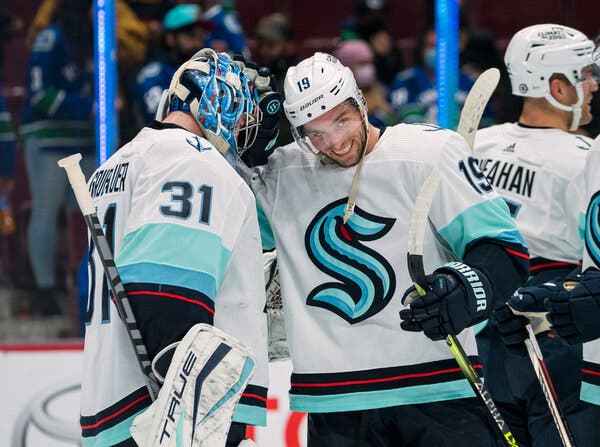 When the first puck is dropped on the Seattle Kraken during their first regular-season game tonight, fans will be hoping for a win. But the truth is, it doesn’t matter what side of the win/loss column they wind up on. The truth is, they’ve already won.

When the first puck is dropped on the Seattle Kraken during their first regular-season game tonight (against the Vegas Golden Knights), many fans will hope for a Kraken victory to underscore their bright future. But the truth is, it doesn’t matter what side of the win/loss column they wind up on. The truth is, they’ve already won, just by having an NHL team in Seattle.

When the league green-lit an expansion team in Seattle, it electrified locals and outsiders alike – and the choice to go with a name like Kraken showed majority owners Jerry Bruckheimer, Tod Leiweke and David Bonderman understood who their audience could be: hardcore hockey fans, but also, fans who wanted nothing more than to experience the big-league feeling that had been somewhat muted in Seattle since the NBA SuperSonics left for Oklahoma City. Kraken was a perfect name for people who could imagine the mythical monster, and be entertained just by the mention of it. Now, with a ground-up view of a brand new franchise, fans can emotionally (and financially) invest in something meaningful.

And the steps the Kraken already have taken are all about endearing themselves to the larger community. They’ve helped revive the NCAA’s University of Alaska Anchorage hockey program. They’ve started The One Roof Foundation charity, which is focused on environmental justice, youth homelessness, and youth access to hockey. The team joined the Black Girl Hockey Club’s “Get uncomfortable” campaign. In sum, Kraken ownership’s initial focus has been on establishing roots in Seattle and building off the history of hockey in the city.

It really shouldn’t come as a surprise the Kraken have been hitting home runs since their inception. Bruckheimer is famously known for producing smash hits in the movie industry, including “Top Gun”, “Con Air”, and “Beverly Hills Cop”. He is a master mass entertainer, and isn’t he exactly who you’d want to kick-start an entertainment experience out of thin air?

Of course he is. Bruckheimer isn’t one of the old-timer hockey establishment people who want players and coaches to lean on humility and play down their incredible talents. They want a more lively, fun experience for their fans. That’s the right direction for the NHL and all of its teams, and to see Seattle so openly embrace a more engaging involvement is a breath of fresh air.

The team Kraken GM Ron Francis has assembled may surprise the hockey world and make the playoffs in the talent-challenged Pacific Division, but that would just be gravy on top of Seattle’s feast. Seattle’s ownership paid the NHL a whopping $650 million in expansion fees, but they’re already making millions in merchandising – powered by an incredibly meticulous design choice – as well as their TV rightsholder share. It won’t be long at all for the Kraken to dig out of the hole that initial franchise fee is for them.

As the on-ice product improves, more money will come their way via increased ticket prices, and ownership has already given Francis the OK to spend to the salary cap’s upper limit. The fact the Kraken have spent more than $76.4 million on their 2021-22 roster is a credit to ownership’s competitive intentions. It’s pedal-to-the-metal in many ways in Seattle, even if that’s not entirely possible for them on the ice. Slow-but-steady on-ice improvement is more important to them than a first-year super-splash like the Golden Knights made in their initial NHL season. In between the wins, the Kraken have to leave a positive footprint on multiple off-ice fronts. That will generate enough public goodwill to keep Seattle in the headlines and at the top of internet searches when their on-ice play is lacking.

So enjoy Game 1, Kraken fans. If they beat Vegas in Las Vegas tonight, that’ll be a lot of fun. If they don’t, that’s OK, too. Just being there is victory enough for big-league hockey’s arrival in Seattle.