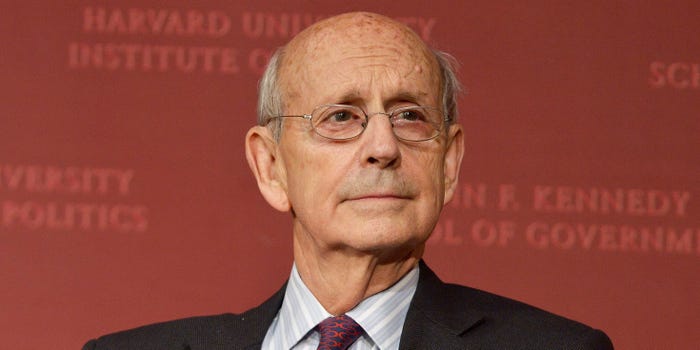 Justice Stephen Breyer will step down from the Supreme Court at the end of the current term, according to people familiar with his thinking.

President Joe Biden and Breyer are scheduled to appear together at the White House Thursday as the Supreme Court justice is set to announce his retirement, a source familiar with the matter confirmed to NBC News.

Breyer is one of the three remaining liberal justices, and his decision to retire after more than 27 years on the court allows Biden to appoint a successor who could serve for decades and, in the short term, maintain the current 6-3 split between conservative and liberal justices.

At 83, Breyer is the court’s oldest member. Liberal activists have urged him for months to retire while Democrats hold both the White House and the Senate — a position that could change after the midterm elections in November. They contended that Justice Ruth Bader Ginsburg stayed too long despite her history of health problems and should have stepped down during the Obama administration.

Ginsburg’s death from cancer at 87 allowed then-President Donald Trump to appoint her successor, Amy Coney Barrett, moving the court further to the right. An appointment by Biden could keep Breyer’s seat on the liberal side of the court for years or decades to come.

Biden said in brief remarks to the press on Wednesday that he will leave it to Breyer to formally announce the retirement.

“Let him make whatever statement he’s going to make and I’ll be happy to talk about it later,” he said.

White House press secretary Jen Psaki had earlier tweeted a statement, saying, “It has always been the decision of any Supreme Court Justice if and when they decide to retire, and how they want to announce it, and that remains the case today.” The White House had no additional details or information to share, she added.

Erwin Chemerinsky, dean of the University of California Berkeley School of Law, urged Breyer to retire in a Washington Post op-ed article in May, writing that there are times “when the stewards of our system must put the good of an institution they love, and of the country they love, above their own interests. They have to recognize that no one, not even a brilliant justice, is irreplaceable, and that the risks presented by remaining are more than hypothetical.”

Biden promised on the campaign trail to nominate a Black woman to the court. In the wake of Breyer’s announcement, there was an outpouring of statements calling for him to follow through. The progressive group Demand Justice hired a truck last year to drive around Washington with the sign: “Breyer Retire. It’s time for a Black woman Supreme Court justice.”

Among likely contenders are U.S. Circuit Judge Ketanji Brown Jackson of the Court of Appeals for the District of Columbia, a former Breyer law clerk; and Leondra Kruger, a justice on California’s Supreme Court.

Jackson, formerly a district court judge in Washington, was nominated by Biden to the U.S. Circuit Court and was confirmed by the Senate in mid-June on a 53-44 vote, including three Republicans. She succeeded Merrick Garland, who left the appeals court to become Biden’s attorney general.

Sen. Patty Murray, D-Wash., was among those who issued a statement soon after the news of Breyer’s impending retirement, calling on Biden to uphold his pledge to nominate a Black woman as the next justice.

“The court should reflect the diversity of our country, and it is unacceptable that we have never in our nation’s history had a Black woman sit on the Supreme Court of the United States — I want to change that,” she said.

Senate Majority Whip Dick Durbin, D-Ill., echoed those sentiments in a tweet, saying Biden has the opportunity to bring “diversity, experience, and an evenhanded approach to the administration of justice.”

Senate Majority Leader Chuck Schumer, D-N.Y., said Biden’s nominee will “receive a prompt hearing in the Senate Judiciary Committee, and will be considered and confirmed by the full United States Senate with all deliberate speed.”

Republican Sen. Lindsey Graham of South Carolina, who voted for Justices Sonia Sotomayor and Elena Kagan, said if Democrats “hang together,” as he expects, they will have the power to replace Breyer without one Republican vote.

“Elections have consequences, and that is most evident when it comes to fulfilling vacancies on the Supreme Court,” Graham said in a statement.

Despite calls from some Biden supporters to add more seats to the Supreme Court to counter its current conservative lean, Breyer said in March that such a move would risk undermining confidence in the court. Advocates of court packing, he said, should “think long and hard before embodying those changes in law.”

Appointed by President Bill Clinton, Breyer came to the Supreme Court in 1994 and became one of the court’s moderate-to-liberal members, though he often said it was misleading to label justices with such terms.

Breyer believed that interpreting the Constitution should be based on practical considerations, changing with the times. That put him at odds with conservative justices who said the court must be guided by the original intent of the founders.

“The reason that I do that is because law in general, I think, grows out of communities of people who have some problems they want to solve,” he said in an interview.

Breyer wrote the court’s opinion striking down a state law that banned some late-term abortions in 2000 and dissented seven years later, when the Supreme Court upheld a similar federal law passed by Congress. He supported affirmative action and other civil rights measures. And in a widely noted dissent in 2015, he said the death penalty in America had become so arbitrary that it was probably unconstitutional.

Biden is expected to act quickly to nominate a successor who can be ready to serve when the court’s new term begins Oct. 3. A former chairman of the Senate Judiciary Committee, Biden knows firsthand how the confirmation process works.