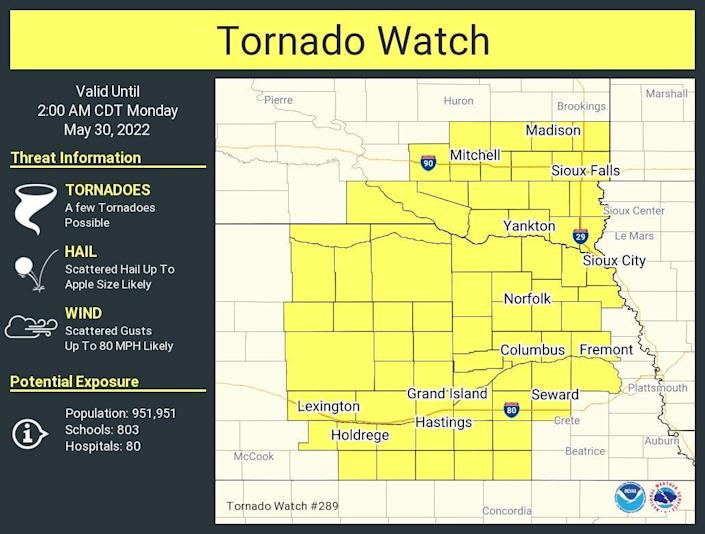 A tornado warning has been issued until 1:30 a.m. in and around Yankton.

The National Weather Service has issued a tornado watch for Sioux Falls and much of southeastern South Dakota until 2 a.m. Monday morning.

Another round of strong to severe thunderstorms, including strong winds with gusts as high as 70 mph, are expected, according to NWS.

While exact locations details are uncertain, it appears that storms will be capable of producing hail up to tennis ball size, and strong winds, as severe threats.

However, a few tornadoes are are also possible.

Forecast for the remainder of Memorial Day weekend Sunday night

Showers and thunderstorms are likely, mainly before 3 a.m. Some of the storms could be severe. The chance of precipitation is 60%. New rainfall amounts between a quarter and half of an inch possible.

A chance of showers and thunderstorms, mainly after 1 p.m. Some of the storms could be severe. Mostly sunny skies, with a high near 83. Breezy, with a southeast wind 10 to 15 mph becoming south southwest 20 to 25 mph in the afternoon. Winds could gust as high as 35 mph. Chance of precipitation is 50%.

A chance of showers and thunderstorms, mainly before 1 a.m. Some of the storms could be severe. Partly cloudy, with a low around 56. Breezy, with a southwest wind 15 to 20 mph, with gusts as high as 35 mph. Chance of precipitation is 30%.

A slight chance of showers before 1 pm. Partly sunny, with a high near 68. West northwest wind 10 to 15 mph, with gusts as high as 30 mph. Chance of precipitation is 20%.