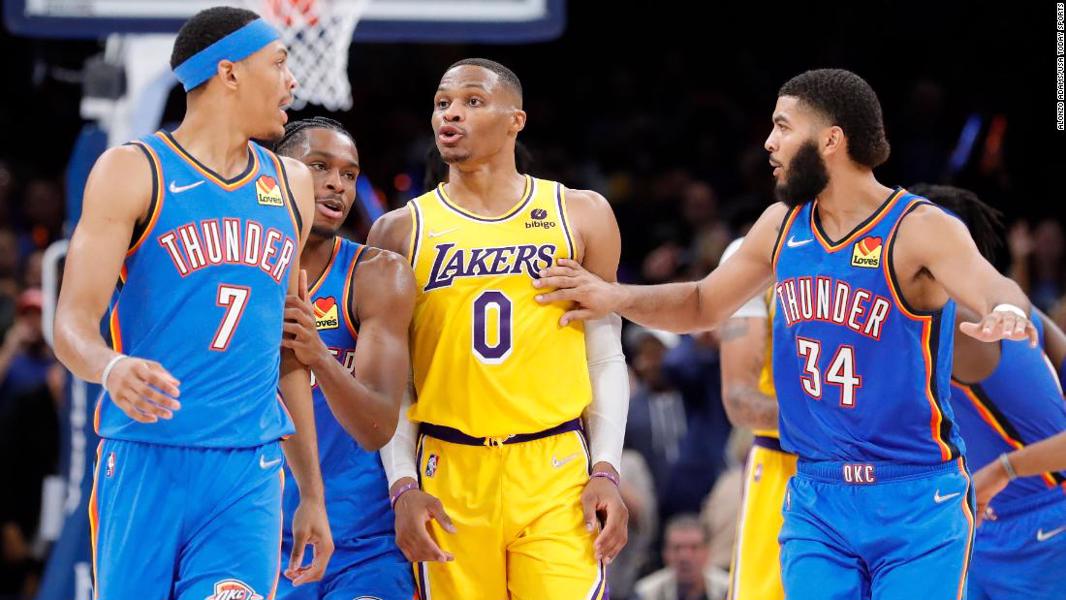 The Los Angeles Lakers blew a 19-point lead to the Oklahoma City Thunder and lost at the buzzer, 107-104.

After a close first quarter, the Lakers began hitting 3-pointers in the second quarter and established a 44-25 lead. However, L.A. began losing the lead in that same period and went into halftime up by four points.

L.A. managed to hold the lead until the five-minute mark of the fourth quarter when everything fell apart.

Shai Gilgeous-Alexander became unstoppable from all scoring levels, and the Lakers just didn’t have enough on both ends of the floor to keep up with his scoring outburst.

A logo three in the final minutes essentially ended the game, even though both teams exchanged 3-pointers and free throws before the buzzer sounded.

LeBron James didn’t play, but it’s simply inexcusable for the Lakers to blow a big lead to the youngest team in the NBA twice in a one-week span.

Here’s how the players graded individually:

Russell Westbrook had a solid game all night until it mattered most, which is why his grade takes a hammer. He shot 3-of-4 from deep at one point in the game and got to his mid-range spots for points, but then he became too aggressive and couldn’t sustain his efficiency.

A 27-point performance will be forgotten by a late-game turnover when he lost the ball trying to euro-step into a layup to tie the game down two points.

Avery Bradley had a solid game with his role. He scored nine points on 4-of-7 shooting, including a deep three late in the game to give L.A. hope. However, his defense against Oklahoma City’s guards late in the game wasn’t good enough, so his grade takes a slight dip.

Kent Bazemore had just two points, two rebounds and two assists in 22 minutes. He missed all four of his attempts, so he didn’t have the two-way impact he needed to help L.A. win.

Anthony Davis started off on fire right out of the gate making his first seven shots. He finished with 29 points, 18 rebounds, five assists, two blocks and a steal and limited his 3-point attempts, but the Thunder did a great job preventing Davis from getting looks near the basket when the game was on the line.

DeAndre Jordan didn’t make an impact in his 14 minutes since he started in place of James. He logged just one point and three rebounds but missed all three of his shots, which is uncharacteristic of him.

Carmelo Anthony’s shooting kept the Lakers fighting in the final minutes. He finished with 21 points, six rebounds, two assists, two steals and a block in 32 minutes off the bench and made 5-of-10 triples. Unfortunately, he didn’t get to take the potential game-tying shot at the buzzer.

Austin Reaves hit some big shots down the stretch and finished with eight points on 2-of-5 3-point shooting. He had some tough fouls called on him in the final minutes against Oklahoma City’s bigger guards, but his rotations and individual defense were mostly on point all night.

All of Rajon Rondo’s 15 minutes were awful. Despite logging four dimes, he missed all four of his attempts, and most were right near the rim on floaters and layups. He also had three turnovers in that time, so it was a night to forget for someone who needed to step up in James’ absence.

Malik Monk made a running layup early in the game, but his impact after that in 13 minutes was empty.

Wayne Ellington made his regular-season debut, but it wasn’t a good one. He shot 1-of-6 from the field (1-of-5 from deep), which is the complete opposite of why L.A. signed him. But since he has rust, he doesn’t get an F.

Dwight Howard played only eight minutes, but he made a notable impact in the second quarter with his rim protection. He finished with two points, four rebounds, two steals and a block in that time but played little in the second half. That could be due to a recent neck injury he is recovering from.