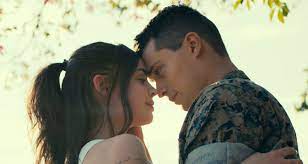 Marine meets girl, girl needs healthcare, Marine needs BAH to pay off an old drug dealer. So what do they do? Get married after three brief conversations the day before he ships off to Iraq and split the money.

That is the premise of Netflix’s “Purple Hearts,” which stars Sofia Carson as Cassie Salazar and Nicholas Galitzine as Luke Morrow.

Cassie is a struggling singer working in a bar that sometimes lets her band perform one song every Friday. She has Type I Diabetes, but her art doesn’t afford her health insurance. Luke, on the other hand, is an addict in recovery. He joined the Marines to get a fresh start and earn his dad’s respect, but he owes his former dealer a hefty sum of money.

She first propositions a lifelong friend-turned-Marine to engage in the fraudulent marriage, but he turns her down because he already has a girlfriend of his own. Enter his bunkmate, Luke. And while the marriage is fake, the consummation that takes place at the base hotel after their courthouse wedding certainly isn’t…

Despite essentially being strangers, the two Skype often so Uncle Sam doesn’t catch onto the sham marriage. But after a few conversations, Luke becomes Cassie’s muse, and she pens a song for the deployed men called “Come Back Home.” Unfortunately, Luke does indeed make his way home with a serious IED injury, turning their fake marriage into one where the pair must now care for each other … in sickness and in health.

As you can imagine, eventually the Marine Corps finds out about the sham, Luke loses everything, and he has to serve out a prison sentence. On the other hand, Cassie’s dreams all come true — her band takes off and gets to open for Florence + the Machine. Everything falls into place for her, except for the minor inconvenience of having fallen in love with her fake husband.

The movie is based on a novel by Tess Wakefield, and is something of a soap opera-esque take on a military marriage entered into for the benefits. The best way to describe the movie itself is wounded in action — it tries, but it’s just not quite at 100%. It is exactly as corny as you’d expect, but I couldn’t look away. The storyline is thin, and the military premise is cliché, but, frankly, the chemistry between Galitzine and Carson is off the charts.

Plus, once Luke finishes his stint in jail, he and Cassie live happily ever after — complete with a closing montage beach scene that looks like a Tommy Bahama ad for white linen apparel.