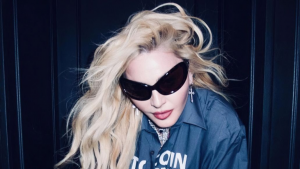 On Tuesday, the Queen of Pop announced she’ll commemorate the 40-year anniversary of her career later this year with The Celebration Tour, which will span 35 cities around the world starting this summer.

“I am excited to explore as many songs as possible in hopes to give my fans the show they have been waiting for,” said Madonna, 64, in a press release about the tour, which is poised to showcase a career-spanning setlist and pay tribute to the city where she was first launched to stardom: New York.

“Madonna, I dare you to do a world tour and play your greatest motherf—ing hits,” says Schumer, 41, in the clip.

Kicking off July 15 at Rogers Arena in Vancouver, The Celebration Tour will make stops in cities including Seattle, Detroit, New York, Boston, Miami, Los Angeles and more throughout its North American leg, which wraps Oct. 7 in Las Vegas. Then, Madonna wil head overseas for European shows in London, Stockholm, Barcelona, Paris, Berlin and more from Oct. 14 through Dec. 1.

Presale tickets will become available for Citi cardholders and members of Madonna’s Official Fan Club this week, and the general public can purchase tickets starting Jan. 20 and Jan. 27, depending on the show date. More information is available at Madonna’s website.

Known from RuPaul’s Drag Race, Bob the Drag Queen (born Caldwell Tidicue) will perform as a special guest for every show of the tour.