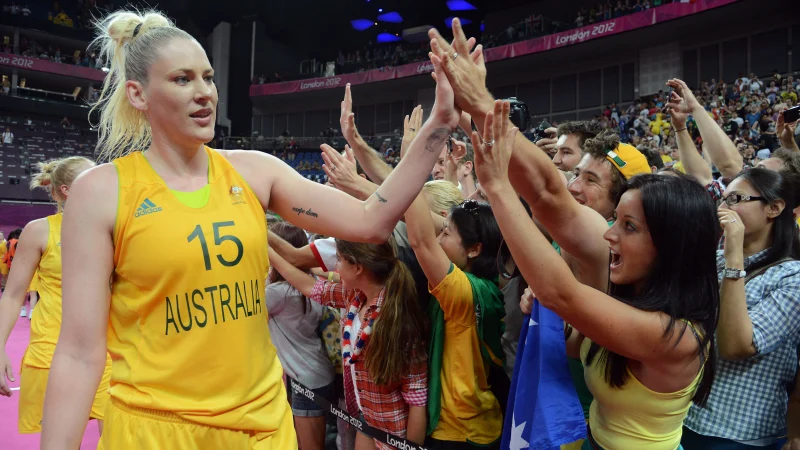 It was an inconspicuous return. Just over a year ago, Lauren Jackson, one of the greatest players in women’s basketball history, returned to the suburban courts of Albury, a small regional city in southeastern Australia, to play social basketball. No crowds, no fuss. Just hoops.

“I was pretty overweight,” Jackson said. “But I could still get up and down the court. I could still shoot the ball. And I was still very competitive.”

Jackson, 41, was a four-time Olympic medalist for the Australian national team (nicknamed the Opals), a two-time W.N.B.A. champion with the Seattle Storm, a three-time W.N.B.A. most valuable player and a Naismith Memorial Basketball Hall of Fame inductee. But she had been out of the game for years, having retired in 2016 after injuries all but ended her career in 2014.

She didn’t think of her return to her hometown courts as a comeback, but it turned out to be just that. Jackson, who had an office job with Basketball Australia, last month completed her remarkable return to competition when she was named to the Opals’ squad for in the 2022 FIBA Women’s Basketball World Cup in Sydney. Australia meets Serbia on Sunday and Canada on Monday.

As Jackson spoke about her comeback in an interview at her team’s hotel, in Sydney’s Olympic precinct, tears formed in her eyes.

“I’m sorry, I get emotional about it,” she said. “The sport has meant so much to me, on and off the court. Even the fact I’m still working in it — I just want to see it thrive. So to have this opportunity, this last shot at being a part of something special — this journey might be the most significant in my entire life.”

Jackson, the daughter of two national basketball team players, was a teenage sensation in Australia, entering the Australian Institute of Sport at 16 and leading its team to a national championship at 18. The W.N.B.A.’s overall No. 1 draft pick in 2001, she was a seven-time league all-star.

“Everyone I talk to has her in the top three” of all time, Kobe Bryant said of Jackson in 2012. “And I mean everyone.”

A series of injuries, including chronic troubles with her right knee, sidelined Jackson late in her career. It was her dream to retire after the 2016 Olympics, where she hoped to lead the Opals past their archrivals from the United States. Jackson’s Australian team had lost to the Americans in the Olympic gold medal matches in Sydney in 2000, Athens in 2004 and Beijing in 2008, and in the semifinals in London in 2012.

But she wasn’t able to return.

“I tried to suit up a couple of times,” Jackson recalled, “but I was just in so much pain that I couldn’t move.” Missing out was a cruel end to a two-decade basketball career. “It definitely wasn’t on my terms,” she said.

Jackson returned to Albury, a city of 50,000, and took a position with Basketball Australia, leading its women’s basketball program. She had two children. She started taking medical marijuana, as part of a clinical trial, to ease her knee pain.

In time, she returned to the court, at age 40, at a local facility named in her honor: the Lauren Jackson Sports Center.

Local players were star-struck — and a little intimidated, even unhappy, to be facing down a legend of the game. “There were a lot of complaints,” Jackson said. “I was like: ‘I’m a single mom, I’ve just had two kids and I have a knee replacement — and you’re complaining?’ But it was fun, a lot of fun.”

Jackson discovered that the pain relief she got from the cannabis allowed her to return to the gym. “One training session led into another,” she said. Her training partner and best friend since childhood, Sam McDonald, also happened to be the assistant coach of the Albury Wodonga Bandits, a semiprofessional team. He suggested a return and, by April of this year, Jackson was competing again.

She scored 21 points in 22 minutes for the Bandits in her first competitive game in nine years. “Is the G.O.A.T. back?” tweeted FIBA, basketball’s global governing body.

With Australia scheduled to host the World Cup in September, whispers soon spread of a national team comeback. Jackson initially brushed off the idea, but then was invited to a training camp with the Opals.

“I remember when I first went into camp, I said to the girls: ‘I don’t expect that I’m going to go any further than this, but it’s a real honor to be here — to be part of this process, to see the way you train, to help in any way I can.’” That led to an international camp in New York.

“I remember thinking, in the back of my head, this is going to be it,” she said. “Because I just didn’t know how my body was going to hold out.”

Yet last month, the Opals’ coach, Sandy Brondello, who also coaches the New York Liberty, told Jackson on a video call that she had made the team. In a recording of the call, Jackson looks shocked. “I don’t think there was ever a moment where I was like, ‘I’m going to make the World Cup,’ until I was actually told by Sandy,” she said in an interview.

On Thursday in Sydney, Jackson played her first competitive game for Australia in almost a decade. She wore the number 25 on her jersey, marking the quarter-century since she first played for the Opals.

Jackson checked in halfway through the first quarter, to a huge roar from the crowd. She missed her first shot, but soon nailed a 3-pointer, causing another eruption in the stands.

It was a tight game until the final quarter, when France pulled away to win, 70-57. Jackson played more than 10 minutes, proving important defensively but not adding any further scoring.

“It’s pretty crazy to be here,” she said after the game. Jackson was disappointed by the loss, but added, “I can’t wipe the smile off my face because I’m so honored to be here representing Australia.”

Brondello called the game “an amazing comeback for Lauren.” She conceded that Jackson was not likely to dominate as she once did, though she expected her to grow into the tournament. “This doesn’t change her legacy at all,” Brondello said.

The Opals’ prospects at the World Cup are uncertain. Their loss to France was not a promising start, but they bounced back on Friday with a 118-58 win over Mali (Jackson contributed eight points). As ever, the United States is likely to stand between the Australians and a gold medal.

According to Jackson, this tournament will be her last. She has no plans to play in the 2024 Olympics in Paris (she will be 43; it would be her fifth Games). “No way,” she said. “I say that to you knowing full well where I’ve come from, so anything is possible, but I don’t think that’s happening.”

It’s not clear if she will be welcome back at social basketball, either. “I don’t know if they’ll let me,” she laughed.

But after her first farewell to basketball ended in agony, Jackson is glad to be bowing out on her own terms. She still endures the knee pain — “I feel it every day,” she said — but thanks to medical cannabis and a therapeutic use exemption (marijuana is on the World Anti-Doping Agency’s prohibited list), Jackson can have one last dance.