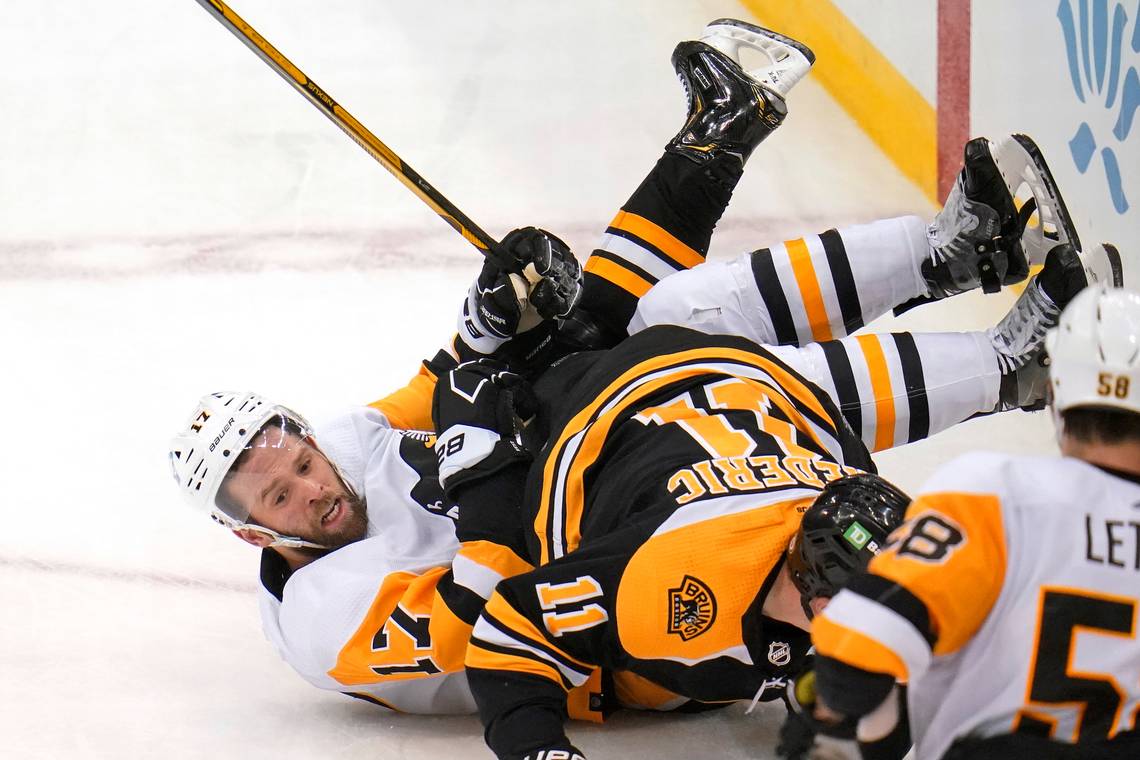 PITTSBURGH — The good news, of which there was little at the end of Thursday night for the Bruins, is that three of their injured key players will be back in the lineup any day now.

Goalie Linus Ullmark will get a start this weekend. David Pastrnak and Hampus Lindholm, sidelined for nearly three weeks, will return to action no later than Tuesday night.

All of which was of little solace here at PPG Paints Arena, where the Penguins rode a Jake Guentzel hat trick and airtight goaltending by Casey DeSmith (52 saves) to a 4-0 win over the Bruins. The loss, their fifth in the last eight gams (3-5-0), was the fourth time the Bruins have been blanked this season.

“They’re great players, a big part of our [team],” mused team captain Patrice Bergeron, asked if the returning players will provide a sense of relief. “Obviously, it’s one of those things, you want and need to do the job with the guys who are on the ice. That’s something we’ve taken pride in in this locker room. But, yeah, it always give a boost when you have some players coming back.”

The struggling Boston power play, blanked yet again, showed little pop in two chances. The Bruins have gone nine straight games without scoring on the advantage, blanked on a total 29 chances. Mercy.

“We’re off net with our chances,” said coach Bruce Cassidy, slightly more encouraged with the second PP opportunity of the night. “Gryz [Matt Grzelcyk] missed, Charlie [McAvoy] missed a couple. Eventually you have to hit the net with your chances if you expect to come out of a funk.”

Guentzel, 27, now with 40 goals for the second time in his career, potted an empty-netter to complete his hat trick. Jason Zucker scored the other goal for the Penguins.

Now with five games remaining on the regular-season schedule, the Bruins still don’t know their first-round playoff opponent. One of the teams in the mix, the Rangers, will be at the Garden Saturday for a 3 p.m. matinee, perhaps with Ullmark in net for the Bruins. If Swayman gets the assignment, it will be his season-high fourth straight start.

A pair of goals in the second, the first after the Bruins rolled up a 10-0 shot lead in the period, put it away for the Penguins. And it was the second goal, by Zucker, that really deflated the Boston attack. After seeing DeSmith stop his 10th shot in the opening six minutes, the Penguins turned play up ice, Jeff Carter feeding Zucker for the dagger.

Until then, the Bruins were tilting the ice their way. All that traction disappeared with Zucker’s eighth goal of the season.

“We needed a timely save and didn’t get it,” noted Cassidy, later saying, “It was a game-changing moment.”

With 3:48 left in the second, Guentzel cashed in for his second of the night. Kris Letang made it happen with a sweet cross-slot pass from the left, Guentzel connecting from the the opposite circle. Swayman was that split-second late getting across to the right post and Guentzel took advantage.

The Penguins scored the only goal in the opening 20:00, capitalizing on a poor line change that led to newcomer Rickard Rakell (ex- of Anaheim) dishing to Sidney Crosby at the at the blue line near the right wall. Crosby caught Guentzel in stride with a pinpoint feed and the speedy left winger raced in to pot a forehander through Swayman’s five-hole. The Penguins kept manufacturing great chances, not in abundance, and they made them count.

The Bruins landed 11 shots on DeSmith in the first period and the ex-UNH goaltender handled them with ease. The Bruins fell short with follow-up pressure on the net, easing DeSmith’s overall workload. It was a theme that lasted all night.

“They had a number of Grade A chances,” said Cassidy. “I don’t think we had any of those that I recall. Later on, maybe we had a borderline [Grade A attempt], but not clean like they were getting.”

Derek Forbort put on a show during a penalty kill after Taylor Hall was whistled off for slashing at 11:48 of the first. Over the course of the two-minute penalty (the only penalty in the first two periods), Crosby unleashed three short-range slappers from the right wing circle.

Crosby was chopping wood and Forbort was the tree — miraculously left standing when the barrage ended. When play stopped, Crosby gave him a tap of respect as Forbort headed to the Boston bench, where teammates met him with added thanks.

It was a moment to build on, said Cassidy, who was annoyed at what turned into a lost opportunity.

“I didn’t think some of our offensive guys were invested,” said the coach. “I mean, Forby, how do you feel after you just ate five or six pucks? The offensive guys should get a lift from that — that’s frustrating. He really picked us up with that.”