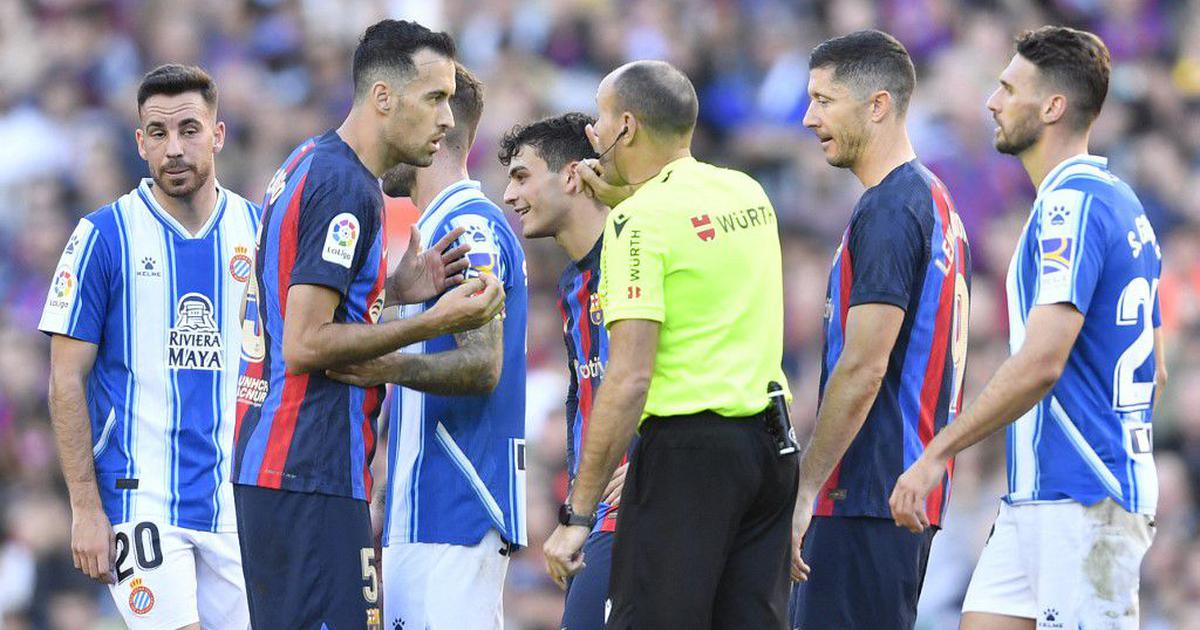 In a 1-1 draw, Both teams finished with 10 men as Jordi Alba and Vinicius Souza were sent off.

Barcelona stumbled in the Spanish title race with a 1-1 draw against rivals Espanyol in a bad-tempered Catalan derby on Saturday, levelling Real Madrid at the top of La Liga.

The duelling Spanish giants have 38 points each from 15 games, nine ahead of third-place Real Sociedad, who beat Osasuna 2-0 later on Saturday.

Both teams finished with 10 men as Jordi Alba and Vinicius Souza were sent off, with referee Mateu Lahoz allowing the game to spiral out of control at Camp Nou.

“The draw is our fault, we can talk about the referee and other things but they are our mistakes,” said Xavi.

“I think Mateu is a referee who controls games but today it got away from him in my opinion, he let the game get totally out of control.”

“(But) I don’t blame him for anything, the fault is ours. We lowered our intensity.”

The teams were at loggerheads before a ball was kicked because Barcelona started Robert Lewandowski, who had been banned before a late court ruling allowed him to play.

The forward, due to miss three league matches, was only allowed to feature thanks to a controversial decision announced on Friday, suspending his punishment.

It greatly angered Espanyol, whose president and directors boycotted the match, while Barca coach Xavi admitted his team had prepared all week expecting to be without the division’s top goalscorer.

The Spanish football federation said in a statement on Saturday they could not override the court’s decision.

Lewandowski was not at his best but Barcelona took the lead after just seven minutes with Alonso capitalising on shoddy set-piece defending from Espanyol to head home.

The former Chelsea defender, deployed as a centre-back, should have doubled his tally but sent Alba’s cross wide from point-blank range.

Espanyol’s only chance of the first half came when Nico Melamed had a shot deflected wide of Marc-Andre ter Stegen’s far post, with the hosts looking comfortable.

“We wanted to leave with a win, to leave as leaders,” said Sergi Roberto.

“We had a very good first half, we lacked the goal to kill the game. In the second half there were a lot of cards, sendings off and the game stopped a lot.”

Barcelona faded after the break with wingers Ansu Fati and Raphinha struggling to create danger.

The visitors, 16th, weren’t particularly threatening either but won a penalty after Alonso tangled with Joselu in the area, and the forward dispatched it down the middle.

Lahoz, racking up the bookings, sent off Alba for two in quick succession, before dismissing both Souza, for a foul, and Leandro Cabrera for a clash with Lewandowski seconds later.

However he cancelled the latter dismissal after watching the incident again with VAR, and Barcelona could not find a winner in the nine minutes added on.

Xavi also received a booking from Lahoz for complaining from the sidelines late on, and the official left the stadium to jeers and whistles from the home fans.

“These games are very hard to referee, what’s important is the result,” said Joselu.

Real Sociedad earned a solid victory over Osasuna to show they can compete for a Champions League place this season.

Veteran playmaker David Silva pulled the strings for La Real and Brais Mendes opened the scoring in the first half.

Alexander Sorloth doubled their lead after the break and Mikel Oyarzabal made his return from a knee injury he suffered in March as a substitute.