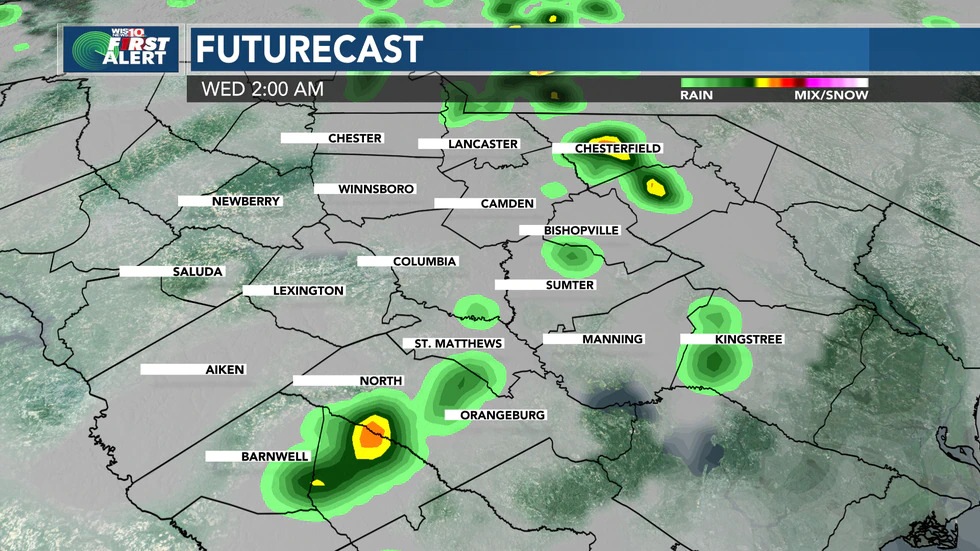 Tonight is a First Alert. A Tornado Watch is in effect for parts of the Midlands until 2 a.m. That means conditions are favorable for tornadoes to develop.

Rain chances are around 50-60% tonight. Otherwise, we’ll see mostly cloudy skies. Lows will be in the mid 70s.

· We’ll see a few scattered showers and potentially some storms Wednesday. Rain chances are around 30%. Showers could develop in the morning, then again in the afternoon for parts of the Midlands. Highs will be in the low 90s.

· Storms are possible Thursday and Friday. Storm chances are around 30% Highs will be in the low 90s.

· We’re tracking more activity in the tropics. Grace will not impact South Carolina at this time. Henri will create a high threat of rip currents at SC beaches.

It’s been an active day in the First Alert Weather Center. We’ve seen several severe thunderstorms, including several tornado warnings and reports of damage in the Midlands.

A lot of this activity is a product of Fred’s moisture moving through the Midlands along with the daytime heating and windy conditions.

A Tornado Watch continues for part of the Midlands until 2 a.m. Wednesday. That means that conditions are favorable for tornadoes to develop. Stay weather aware tonight.
Rain chances are around 50-60% tonight. Otherwise, expect partly to mostly cloudy skies. Some patchy fog is possible. Overnight low temperatures will be in the mid 70s.
For now, Wednesday features about a 30% chance of showers and storms, especially early in the day. A few showers and storms could develop again in the afternoon, but at this point, we don’t expect a severe weather outbreak. We’ll keep you posted. Otherwise, expect partly cloudy skies. Highs will be in the upper 80s.
A few showers and storms are possible Thursday and Friday. Rain chances are around 30% Thursday and Friday. Highs will be in the low 90s.
Some showers and storms are possible this weekend. Highs will be in the low 90s.
We’re also keeping an eye on the tropics. Tropical Storm Grace will continue to track west through the Caribbean and into the Gulf of Mexico. Grace will not impact South Carolina.
Tropical Storm Henri is located in the Atlantic Ocean. The system is not expected to directly impact South Carolina. But there will be a heightened threat of rip currents for South Carolina beaches for the next several days.

Tuesday: Partly Cloudy and Hot. Highs in the low to mid 90s.