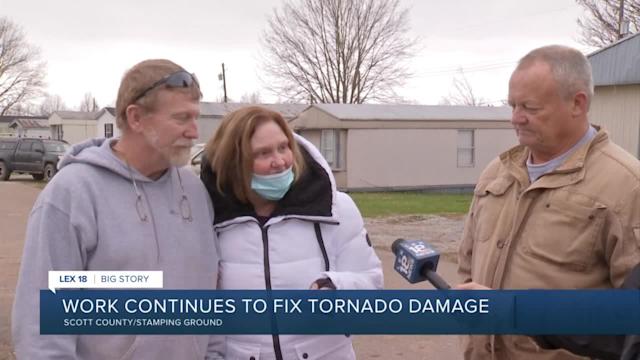 With another storm coming overnight Saturday, neighbors are still recovering after a tornado earlier this week in Stamping Ground.

One woman says she’s able to go back home thanks to the work that’s going on at Parker’s Mobile Home Park.

Smith has called the neighborhood home for years. As she looks at the damaged trailers, she thinks about how she’s thankful this wasn’t worse.

“I’m just happy no one got killed,” she said. “No children got hurt.”

“It was an outpour of community support coming in here and it still is,” said Rob Jones, an electrician in Scott County. “We have donations set up for some of these folks that lost their home.”

Smith credits Jones for the work he did to get things running again in her home.

“Rod Jones, he’s my favorite electrician from now on,” she said.

“He’s the gentleman that inspected this gentleman’s work, and he passed it, so we get to go home,” Smith said.

Hawkins is the chief electrical inspector for Scott County.

“During times like this, the county and the city does whatever we need to do as a community to help any way we can,” Hawkins said.

Smith also credits the owners of the mobile home park for what they’ve done. With another storm creeping into western Kentucky and approaching the central part of the commonwealth, emergency management crews say they’re going to be on top of this.

“We’re going to have people watching it all night long, in constant contact with the National Weather Service by computer and by telephone,” said Michael Hennigan, director of Scott County Emergency Management.

With debris scattered, Hennigan says action was taken to keep everything as secure as possible.

“We’ve tried to make it so anything that’s heavy enough to do damage is tied down or weighted down, and if we have to, we’ll come back and pick it all up tomorrow,” Hennigan said.

Hennigan says if a tornado watch is issued, the Christian Church is ready to open as a shelter.