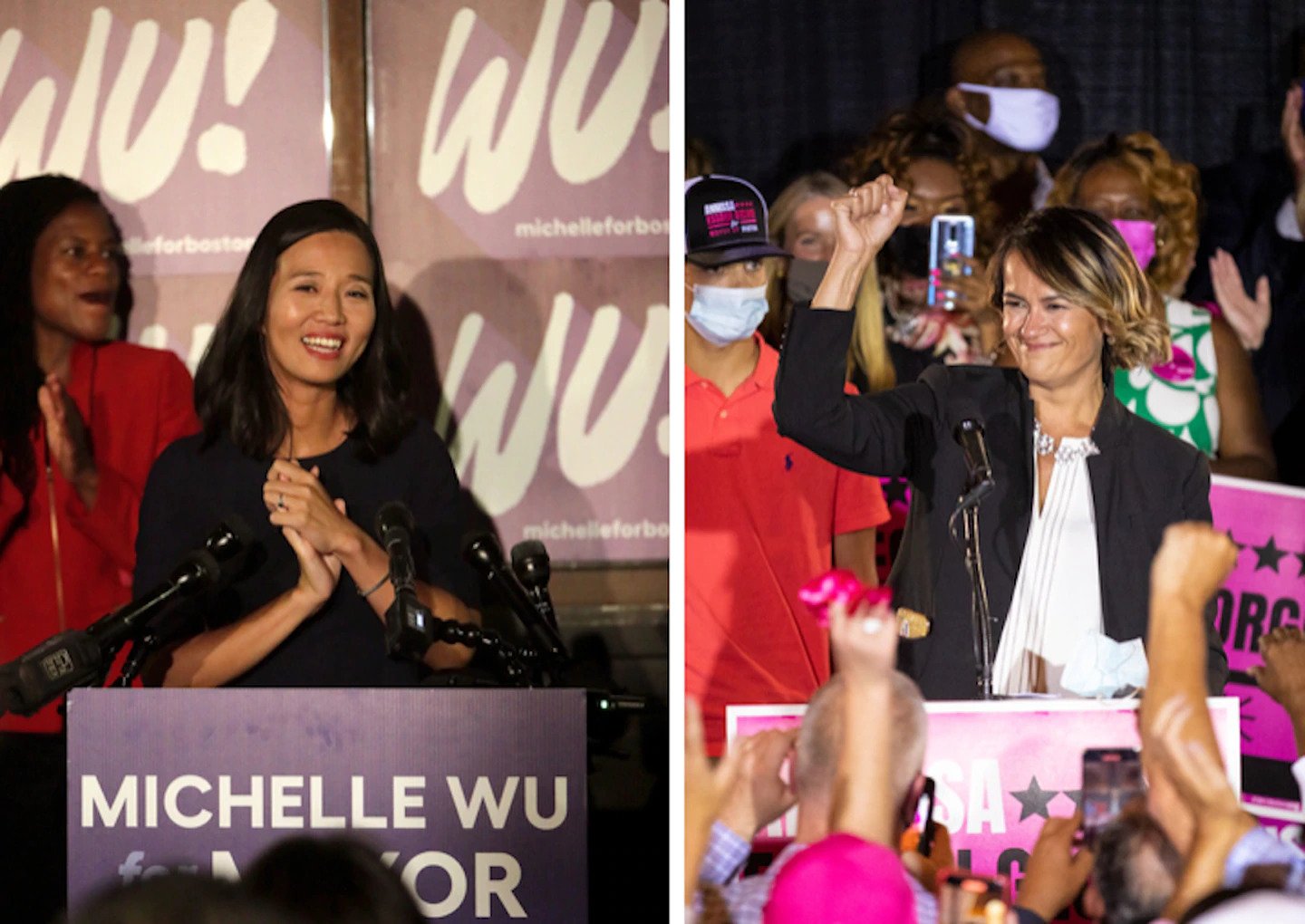 After a long evening with practically no results from city hall, Boston’s mayoral candidates took it upon themselves to call the race.

City Councilors Michelle Wu and Annissa Essaibi George both gave victory speeches Tuesday night, and their main rivals, acting Mayor Kim Janey and City Councilor Andrea Campbell, conceded. Despite few precincts reporting, it appeared clear early Wednesday that the city’s next elected mayor would, for the first time ever, be a woman and a person of color.

Unofficial results were slow to come from city hall as election workers had to ensure those who voted by mail did not also cast a ballot in person. As of 1 a.m., Boston was reporting fewer than 10% of precincts in the election.

Despite the drought of numbers coming from city hall, most of the candidates did not sit and wait before speaking to their supporters. Wu declared victory Tuesday night, thanking her rivals and supporters, and saying the results, when they come in, would make clear the decision Boston will face in November.

“And while the votes are still being counted tonight, we don’t know the exact shape of what the next phase of this race will look like,” she said speaking to a crowd at her election night party in Roslindale. “We already know what the choice is. The city of Boston is about a choice for our future.”

Speaking to a crowd in Dorchester Tuesday night, Essaibi George expressed confidence that she will be Boston’s next mayor, but stopped short of declaring victory.

Campbell, meanwhile, told her supporters she had called Wu and Essaibi George to concede.

Janey did not appear at her own election night party, where a representative told the crowd of supporters to go home and get some rest before they examined the unofficial results Wednesday. Just after midnight, her campaign released a concession statement.

“While we are still waiting on some results, it appears that we have come up short in the election,” Janey said in the statement. “I want to congratulate Michelle Wu and Annissa Essaibi George on their victories this evening. This was a spirited and historic race, and I wish them both luck in the final election.”

Janey already made history by becoming the first woman and first person of color to lead the city as acting mayor. For weeks, it’s been clear the next elected mayor of Boston would almost certainly be a person of color, another first.

Boston voters also turned out to cast ballots in the city’s competitive city council races, including narrowing a crowded field of candidates for four at-large seats.

Districts 4, 6, 7 and 9 also held preliminary races to determine the two final candidates in each race come the November election.

How The Mayoral Race Has Gone So Far

Recent polls showed Wu was leading the field with a tight race for the second spot between acting Janey, Campbell and Essaibi George. John Barros, the city’s former economic development director, came in at a distant fifth in the polls, behind the four women in the race.

The mayoral election comes as the city faces the daunting challenges of containing the pandemic, rebuilding the economy and persuading people of the value of living in Boston when some employers have closed their offices and welcomed remote workers.

Like many big cities, Boston also faces challenges improving policing, education and transportation. But voters have consistently named the high price of housing as their top concern, aside from the pandemic.

Over the last several months, all five major candidates running for mayor campaigned in part by sharing their life stories.

Barros, 48, served as the city’s economic development director under former Mayor Marty Walsh for seven years. He is the son of immigrants from the Cape Verde islands and served as executive director of the Dudley Street Neighborhood Initiative. He first ran for mayor in 2013.

Campbell, 39, is an attorney who was first elected to the city council in 2015, representing a district that includes her Mattapan neighborhood. Among other positions, she served as a deputy legal counsel to former Gov. Deval Patrick.

“You know, this city gave me everything,” she said to the media on Tuesday morning. “It took a poor girl from Roxbury and sent me to Princeton University and, by every metric, I’ve been successful and I want every family, whether they are native born or they got here this morning, to have the same access to opportunity.”

Essaibi George, 47, is a former teacher who has served as an at-large city councilor since 2015. She also owns the Stitch House in Dorchester and is the daughter of immigrants from Tunisia and Poland.

Janey, 56, who was elected Boston city council president last year, became acting mayor in March after Walsh resigned to become U.S. labor secretary. She was first elected to City Council in 2017. And before becoming a politician, she worked at nonprofits, including Parents United for Child Care and Massachusetts Advocates for Children.

Wu, 36, an attorney, was first elected to City Council in 2013 and was the first woman of color to serve as Boston City Council president from 2016 to 2018. The Chicago native moved to Boston to attend Harvard University, where she earned both her bachelor’s and law degree. She later worked for the city under former Mayor Thomas Menino.

“This is a moment where Boston can do more to make sure we are a city for everyone,” she said. “I’m a mom with kids in the schools. I’m living the challenges and I also have a decade of experience in City Hall knowing how to get things done.”

Turnout for the election had been lackluster. As of noon, 36,558 or 8.35% of the city’s 437,647 registered voters had cast ballots. On Monday, Massachusetts Secretary of the Commonwealth William F. Galvin predicted that between 100,000 and 110,000 votes will be cast. That means he expected no more than a quarter of the city’s registered voters to actually vote.

“Her policy platform is extensive, she goes deep into the issues, and she’s constantly trying to find solutions that will make our city better,” Breadon said. “And she thinks sort of outside the box in terms of thinking about solutions as well.”

Boston resident Bejeana Breneville said casting her ballot for Campbell was quick and easy, and she was excited about the likelihood Boston will elect a woman mayor for the first time in November.

Breneville added that Campbell’s life experience made her a strong candidate.

“She has a super unique personal story that really shows her passion through her work, and she’s all about changing the ethics and the barriers that are against Black people, especially in Boston,” Breneville said.

Kasey Conlon, who lives in Brighton, hit the polls before work. She said she’s backing Wu.

“She’s gotten a lot of endorsements from organizations and other politicians that I respect, such as Elizabeth Warren,” Conlon said. “And she’s really been the only one that’s talked pretty forefront about rent control, so, that got my vote.”