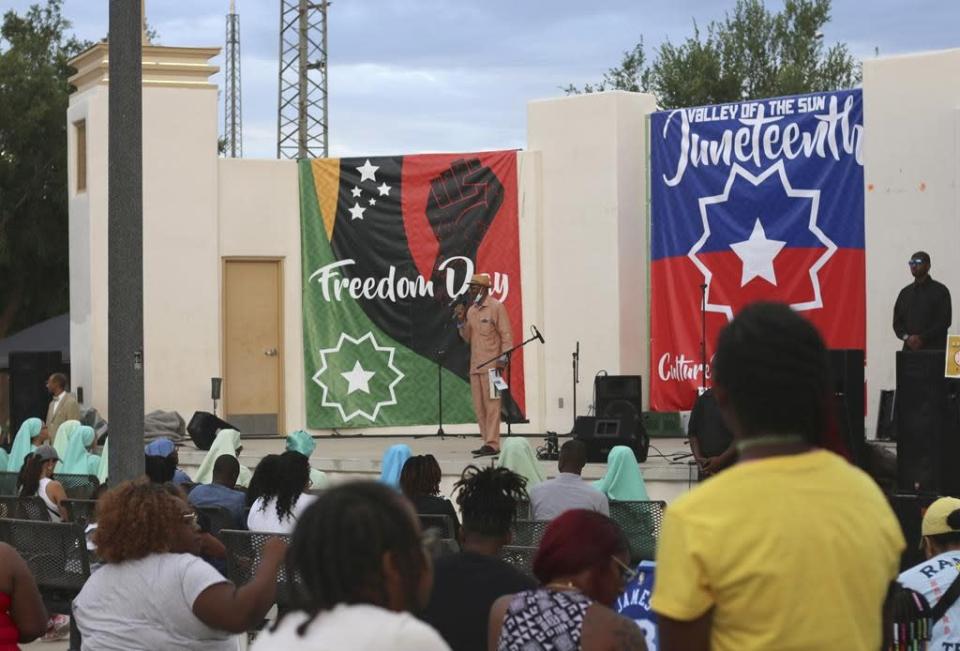 Many people across the valley celebrated Juneteenth on Sunday. The now federal holiday marks the end of slavery in the United States.

Grayce Egami owns her very own skincare company and came to the Juneteenth celebration to showcase her products. “this is because of juneteenth and because of the celebration and who we are as a people,” says Egami, ” that has allowed me to be here today.”

Massage therapist, Tiesha Jackson also came out to promote her business.
“It gives me an opportunity to meet other people, like-minded entrepreneurs, and business owners.”

How did Juneteenth begin?
On June 19, 1865, about two months after the Confederate general Robert E. Lee surrendered at Appomattox, Va., Gordon Granger, a Union general, arrived in Galveston, Texas, to inform enslaved African Americans of their freedom and that the Civil War had ended. General Granger’s announcement put into effect the Emancipation Proclamation, which had been issued nearly two and a half years earlier, on Jan. 1, 1863, by President Abraham Lincoln.

How is it celebrated?
Early celebrations involved prayer and family gatherings, and later included annual pilgrimages to Galveston by former enslaved people and their families, according to Juneteenth.com.

In 1872, a group of African American ministers and businessmen in Houston purchased 10 acres of land and created Emancipation Park which was intended to hold the city’s annual Juneteenth celebration.

Today, while some celebrations take place among families in backyards where food is an integral element, some cities, like Atlanta and Washington, hold larger events, including parades and festivals with residents, local businesses and more.

While celebrations in 2020 and 2021 were largely subdued by the coronavirus pandemic, some cities this year are pressing forward with plans.

Galveston has remained a busy site for Juneteenth events over the years, said Douglas Matthews, who has helped coordinate them for more than two decades.

After dedicating a 5,000-square-foot mural last year, in 2022 Galveston will celebrate the holiday with a banquet, poetry festival, parade and a picnic. Organizers in Atlanta will hold a parade and music festival at Centennial Olympic Park, and similar events are scheduled in Baltimore, Brooklyn, Los Angeles and Tulsa, Okla.

Why has Juneteenth become so important?
Following the killing of George Floyd, a 46-year-old Black man who died in the custody of the Minneapolis Police in May 2020, thousands of people around the United States poured onto the streets in protest. Mr. Floyd’s name, as well as the names of Ms. Taylor, Mr. Arbery, David McAtee and others, became a rallying cry for change across the country, effectively re-energizing the Black Lives Matter movement.

That change came in waves. In Minneapolis, officials banned the use of chokeholds and strangleholds by the police, and said officers must intervene and report any use of unauthorized force.