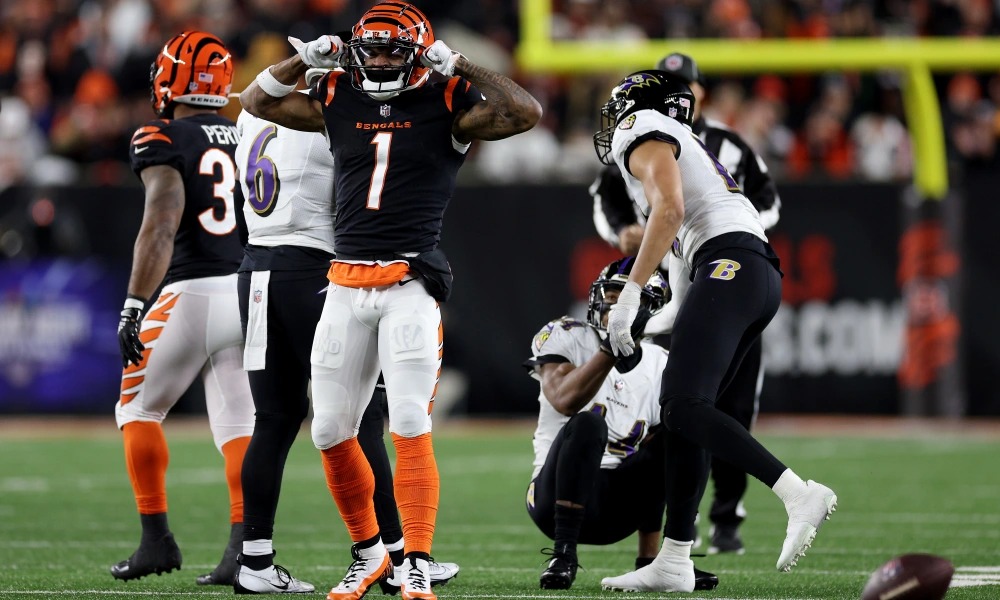 1. Bengals clear Ravens, keep conference title defense alive. Cincinnati entered Super Wild Card Weekend in the unenviable position of being forced to play a division rival in a second consecutive week. Much like the second half of their Week 18 meeting, the Bengals encountered a defense that was difficult to solve. After gaining just 90 yards in the second half of their regular-season finale against the Ravens, the Bengals finished with just 234 yards of offense for the entire game. Cincinnati averaged just 4.3 yards per play Sunday night, keeping things alive by converting 7 of 13 third downs but failing to build a lead offensively against a Ravens team that, on paper, should be beatable. As our Gregg Rosenthal tweeted, Baltimore found a way to turn the usually explosive Bengals offense into the Baker Mayfield-led Panthers in their last two games. Thanks to some timely and opportunistic defense, the Bengals are moving on. They’ll hope to learn enough to avoid another performance like this next weekend.

2. It’s still a game of inches. Baltimore was a yard from taking a lead in a game most expected the Ravens to lose. Thanks to Logan Wilson’s smart attempt to bat the ball out of Tyler Huntley’s hands, the quarterback’s sneak-and-reach attempt failed spectacularly, landing in the arms of defensive end Sam Hubbard, who rumbled 98 yards in the opposite direction for a decisive touchdown. Instead of falling behind 24-17 in a game that lacked offensive firepower, the Bengals grabbed the lead and a massive momentum swing in one play. From there, the defense stepped up to the challenge of preventing Huntley and Co. from returning to the end zone. Huntley’s fumble wasted an excellent drive in which Baltimore covered 80 yards in nine plays and looked destined to score, but it wasn’t the end of the game. The Ravens still had the majority of the fourth quarter left to respond, but didn’t. That fumble will linger in the minds of Ravens fans for the next seven months, existing as proof of just how thin the margin between victory and defeat can be in this sport.

3. Tyler Huntley’s valiant effort falls short. Still nursing a bad knee, Lamar Jackson stayed home for this one, leaving the responsibility in the hands of Huntley to try to push the Ravens to the Divisional Round. After an opening drive interception, Huntley settled in, leading scoring drives of nine and 17 plays to send the Ravens to the break with a 10-9 lead. He did enough to give Baltimore a chance to win, especially after he connected with Demarcus Robinson for a 41-yard touchdown. But ultimately, the absence of Jackson was painfully evident, none more so than when Baltimore called a designed run for Huntley, who had two blockers out in front but was tripped up from behind. Jackson’s rare game-breaking ability wasn’t at Baltimore’s disposal, and try as he did, Huntley just wasn’t good enough to get the Ravens over the hump. It will be an interesting couple of months in Baltimore regarding the club’s future under center.

4. Bengals suffer another injury up front. Cincinnati entered Super Wild Card Weekend without two of its five starting linemen due to injuries. Bengals fans have to feel like they’re stuck in a time loop after witnessing left tackle Jonah Williams exit with an injury of his own in this one. The results were immediate: Nine Ravens defenders registered one or more QB pressures Sunday night, negatively affecting a Bengals offense that underperformed. We don’t yet know how serious Williams’ injury is, but it didn’t look good. If the Bengals don’t receive positive news during the week ahead, they’ll have to prepare for a return trip to the Divisional Round without at least two, possibly three of their starting linemen. The next team awaiting them — Buffalo, which features a defense that had eight players record two-plus pressures versus Miami Sunday — has to be salivating at the thought of rushing Burrow with a very banged-up offensive line. Cincinnati will again be forced to find a way to patch together its blocking unit before heading to Orchard Park. The good news: They’ve been here before.

5. John Harbaugh’s clock management backfires. Baltimore had a chance to send this game to overtime or potentially win it (with a two-point conversion) in the final minutes of the game, and Harbaugh had two of his three timeouts still in his pocket for the final drive. With 1:17 left in the game, J.K. Dobbins gained 11 yards on a short pass, reaching the Bengals’ 17-yard line. The Ravens didn’t snap the ball again until there was 34 seconds left on the clock, and after a holding penalty on Kevin Zeitler pushed them out of the red zone (on a running play, no less), the Ravens were forced to rely solely on the pass. With Huntley facing an uphill climb in terms of yards-to-go and time remaining, he forced two passes in the direction of Mark Andrews, which both landed incomplete. A last-ditch heave to the end zone nearly produced a touchdown, but the ball glanced off James Proche’s hands. It felt like the Ravens should’ve been in a better position in the final seconds, and afterward, Harbaugh explained he was saving his timeouts for their red-zone plays with the goal of scoring with as little remaining time as possible. Instead, they could only chuck up a prayer and hope for the best.