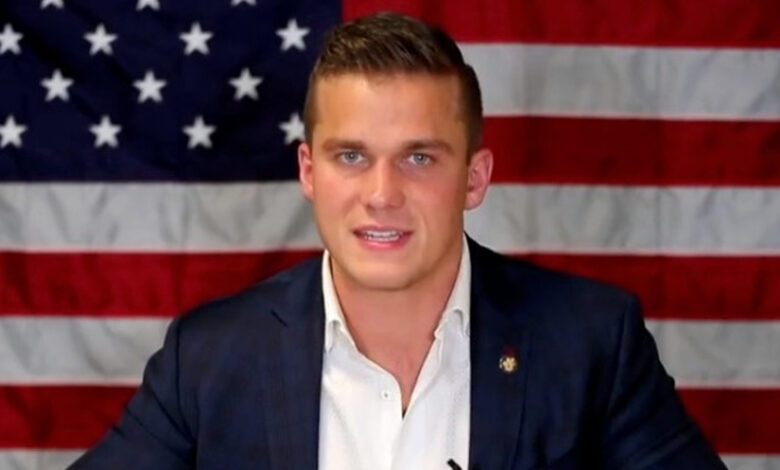 (CNN)An opposition group that is actively campaigning against Rep. Madison Cawthorn has released a video clip appearing to show the North Carolina Republican naked in bed and, as Cawthorn described it, “being crass with a friend” and “acting foolish.”

After the video appeared on social media, Cawthorn tweeted, “A new hit against me just dropped. Years ago, in this video, I was being crass with a friend, trying to be funny. We were acting foolish, and joking. That’s it. I’m NOT backing down. I told you there would be a drip drip campaign. Blackmail won’t win. We will.”
CNN has not been able to independently confirm the video. CNN has reached out to Cawthorn for comment.
It’s the latest controversy for the 26-year-old, who is running for reelection with early voting already underway. The primary will be held on May 17.
The freshman Republican has angered and annoyed a number of his colleagues with a string of antics. Cawthorn became a national figure in 2020 when he beat then-President Donald Trump’s endorsed candidate in the primary to replace then-White House chief of staff Mark Meadows in Congress. But he has caused a number of distractions for House Republicans, who are trying to win the majority in November.
Late last month, Cawthorn was cited for bringing a loaded handgun through a Transportation Security Administration checkpoint at the Charlotte airport. And in February 2021, agents at the Asheville Regional Airport found an unloaded gun and a loaded magazine in Cawthorn’s carry-on bag. A Cawthorn spokesman told the Asheville Citizen-Times when the paper published a story about the incident in July 2021 that the congressman had had brought the gun “by mistake.” Cawthorn was not charged.
In March, Cawthorn sparked an uproar after claiming on a podcast that people in Washington have invited him to participate in orgies and used cocaine in front of him. The episode prompted members of his own party to consider endorsing one of his primary opponents, according to multiple sources familiar with the discussions at the time, amid growing concerns that the North Carolina Republican was dragging down the party with his problematic behavior. Sen. Thom Tillis has thrown his weight behind state Sen. Chuck Edwards in his primary against Cawthorn.
House Minority Leader Kevin McCarthy, amid complaints from members following Cawthorn’s allegations, told the freshman lawmaker he needed to get his act together or else he could face internal consequences, saying also that Cawthorn admitted the allegations were untrue.
“He’s got to turn himself around,” McCarthy told reporters at the time. “I just told him he’s lost my trust, and he’s going to have to earn it back. I laid out everything I find that’s unbecoming. … He’s got a lot of members upset. You can’t just make statements out there.”
CNN reported that same month that Cawthorn was facing charges of driving with a revoked driver’s license — the second time in the last five years he had faced that charge.
He also drew negative headlines when a video surfaced in which he referred to Ukrainian President Volodymyr Zelensky as a “thug” and said that the Ukrainian government was “incredibly evil.”
In 2021, CNN reported on a series of allegations of sexual misconduct made against Cawthorn by women who said he behaved inappropriately toward them during his college years. Cawthorn has denied any wrongdoing.