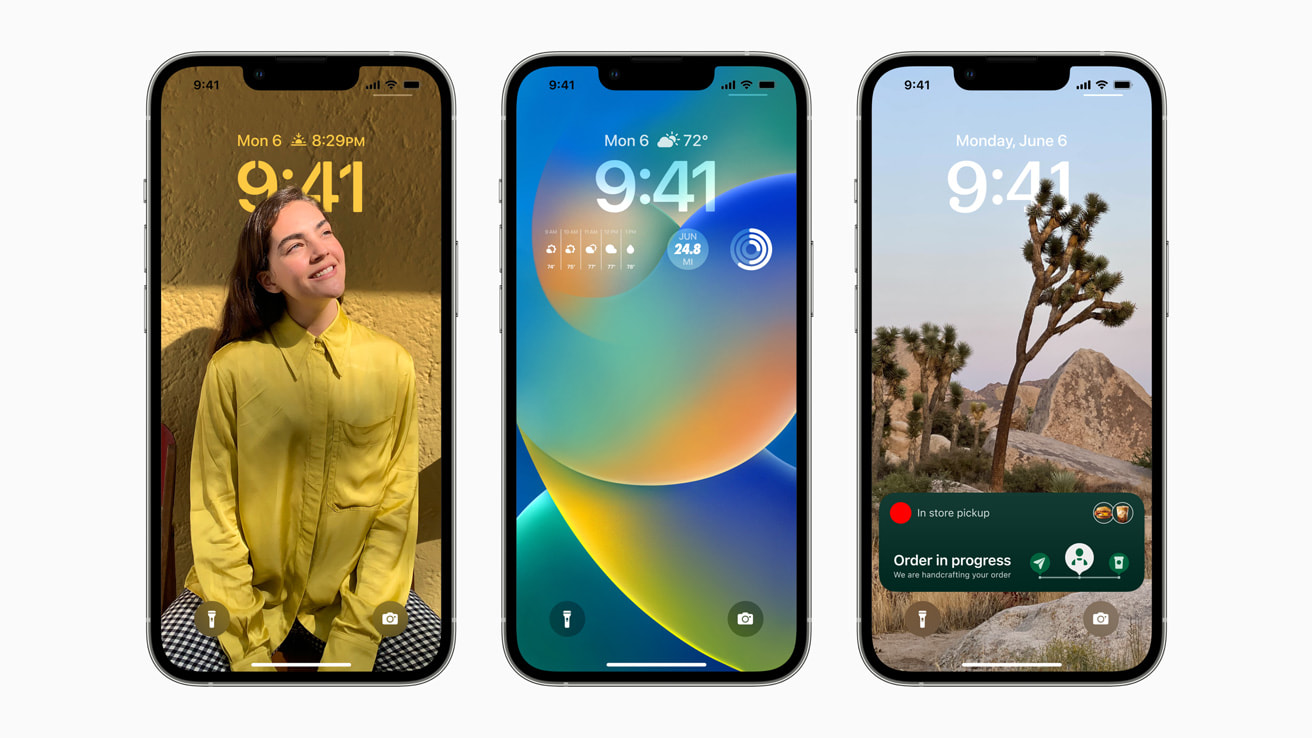 Apple today previewed iOS 16, delivering the biggest update ever to the Lock Screen, and new sharing, communication, and intelligence features that together change the way users experience iPhone. iOS 16 introduces iCloud Shared Photo Library to seamlessly share a collection of photos with family, updates to Messages and Mail that help users stay in touch with ease, and powerful enhancements to Live Text and Visual Look Up.
“iOS 16 is a big release with updates that will change the way you experience iPhone,” said Craig Federighi, Apple’s senior vice president of Software Engineering. “We have reimagined how the Lock Screen looks and works with exciting new features that make it more personal and helpful, introduced iCloud Shared Photo Library for families, streamlined communication through new capabilities in Messages and Mail, and harnessed enhanced intelligence with updates to Live Text and Visual Look Up.”

The Lock Screen gets more personal, beautiful, and helpful with iOS 16. With a new multilayered effect, the subjects of photos are artfully set in front of the time on the Lock Screen, creating a sense of depth. Users can also change the look of the date and time with expressive type styles and color choices.
The Lock Screen features widgets that take inspiration from Apple Watch complications, making it easy to get information at a glance, such as upcoming calendar events, the weather, battery levels, alarms, time zones, Activity ring progress, and more.

A new Lock Screen gallery features a range of options for inspiration, such as Apple collections, which include Pride and Unity to celebrate special cultural moments; a Weather wallpaper to see live weather conditions as they change throughout the day; and an Astronomy wallpaper for views of the Earth, moon, and solar system. Users can also create Lock Screens using their favorite emoji or color combinations. With multiple Lock Screens, users can switch between their favorites with just a swipe.
Live Activities is a new feature that helps users stay on top of things that are happening in real time, such as a sports game, workout, ride-share, or food delivery order, right from the Lock Screen.1

Notifications have been redesigned to roll up from the bottom, ensuring that users have a clear view of their personalized Lock Screen.

The Focus mode was introduced in iOS 15 and has got an upgraded look in iOS 16.

Focus mode cuts out the clutter, making apps display only the content relevant to the user’s needs. The company says that functions of the Focus will be extended to third-party apps.

Scheduling, one of the most essential features for anyone at work, has been added to the Mail app. The feature already exists on Apple’s direct competitors, Gmail and Outlook. So, it comes as a long-overdue update.

The Apple iOS 16 allows users to not only schedule emails but also cancel the delivery of the message before it reaches the intended recipient.

Additionally, like Gmail and Outlook, the iOS 16 suggests if users have missed attachments and follow-ups on an email, in case of no response.

Searching through emails has been streamlined to help recent emails, contacts, documents and links appear as the search progresses.

One Place for Family Photos with iCloud Shared Photo Library

iCloud Shared Photo Library gives families a new way to share photos seamlessly with a separate iCloud library that up to six users can collaborate on, contribute to, and enjoy. Users can choose to share existing photos from their personal libraries, or share based on a start date or people in the photos. A user can also choose to send photos to the Shared Library automatically using a new toggle in the Camera app. Additionally, users will receive intelligent suggestions to share a photo that includes participants in the Shared Photo Library. Every user in the Shared Photo Library has access to add, delete, edit, or favorite the shared photos or videos, which will appear in each user’s Memories and Featured Photos so that everyone can relive more complete family moments.

Live Text and Visual Look Up

Text images across iOS can now be recognised on videos in the Apple iOS 16, with an improved Live Text feature using on-device intelligence. Videos can be paused and text can be copied. The feature also lets users convert currency using the camera.

The Visual Look Up feature has been updated with the option of lifting a picture from any image and using it on apps such as Messages. Users will have to tap and hold the image subject to use the feature.

Earlier, Visual Look Up could identify only plants and pets. It has been updated in iOS 16 to identify insects, statues and birds, too.

CarPlay is one of the finest smartphone integration systems, which lets drivers use certain iPhone apps through the car’s dashboard or infotainment system.

Apple said that CarPlay has “fundamentally changed the way people interact with their vehicles.” The latest upgrade allows CarPlay to provide information on multiple screens within the vehicle.

The integration system can collect the car’s data to provide information on fuel, temperature, speed and other indicators. The new system lets users customise their iPhone experience within the car with Weather and Music features on the vehicle’s dashboard.

Apple said that detailed info about the next generation CarPlay will be shared in the future.

Users can edit or recall recently sent messages, recover recently deleted messages, and mark conversations as unread so they can come back to them later.2 In addition, SharePlay is coming to Messages, making it possible to enjoy synced content like movies or songs and shared playback controls all while chatting in Messages.

The new feature, available for users in the US, allows splitting of a payment due into four equal parts over six weeks. There is no interest and no fees involved, says Apple.

Apple Pay Later seamlessly integrates with Wallet and can be used when making a payment via Wallet or the Apple Pay system. It is available wherever Apple Pay is accepted online or in-app via the Mastercard network. Users can also receive tracking information and receipts in the Wallet for all their Apple Pay purchases.

Another new Apple iOS 16 feature added to the Wallet is expanded support for Keys and IDs. Secure sharing of home, hotel, office and car keys in Wallet through Apple’s apps, such as Messages and Mail, can be done. Wallet ID can be shared with apps needing age or identity verification. However, Apple says that only the “necessary information” will be shared with the app, and users will have the right to consent.

Planning of up to 15 stops can now be done in advance with route syncing, automatically transferred from Mac to iPhone, through the new multistop routing feature in Apple Maps.

Additionally, Maps will show transit updates for easy calculation of travel costs in public transport and maintain up-to-date transit cards with needed balance within the Maps.

Move in Fitness app and Medications in Health

The Apple iPhone iOS 16 helps users achieve fitness goals through the Move feature. A daily goal can be set up on Move, which can track everything from steps to workouts from third-party apps and integrate the same within the Move app. The data can be converted into estimated calories, contributing to the daily Move goal. The Move ring can also be shared with others.

On the other hand, Apple added Medications to its Health app. It helps users manage a medication list and schedules. Users in the US will be able to also collect necessary information about medications by simply taking a photo of them through the iPhone camera. They will also be alerted if the medication contains substances that might be harmful to them. The Health app also lets users share health data with family and make a PDF of health records.

My Sports in Apple News

Scores, schedules and news about favourite teams or leagues — all of these will be available on the new My Sports section of Apple News. According to Apple, users will also be able to watch highlights in the News app itself. The feature will currently be available for users in the US, Canada, the UK and Australia.

The company says that access to premium sports coverage will be provided to Apple News+ subscribers.

One of the most important Apple iOS 16 features concerns the safety of individuals from domestic violence. The Safety Check is a new privacy tool, letting users revoke access to whosoever they have granted it. An emergency reset lets users sign out of iCloud immediately and other devices, too. It resets privacy permissions and limits messaging to the device the users hold in their hands. Safety Check also manages the people and apps that have been granted access.

Two features that come with Safari in the Apple iOS 16 are Tab Groups and passkeys, the latter of which is revolutionary.

Tab Groups let users share a collection of websites with friends and family. Tabs can be added to the collection seamlessly and viewed by all.

Passkeys are basically designed to replace the password. It allows users to use biometric verification as a means of logging into their devices using Touch ID or Face ID. The iCloud Keychain helps sync encrypted passkeys across all Apple devices — iPhone, iPad, Mac and Apple TV. Passkeys can also be used to sign into apps or websites on non-Apple devices using an iPhone.