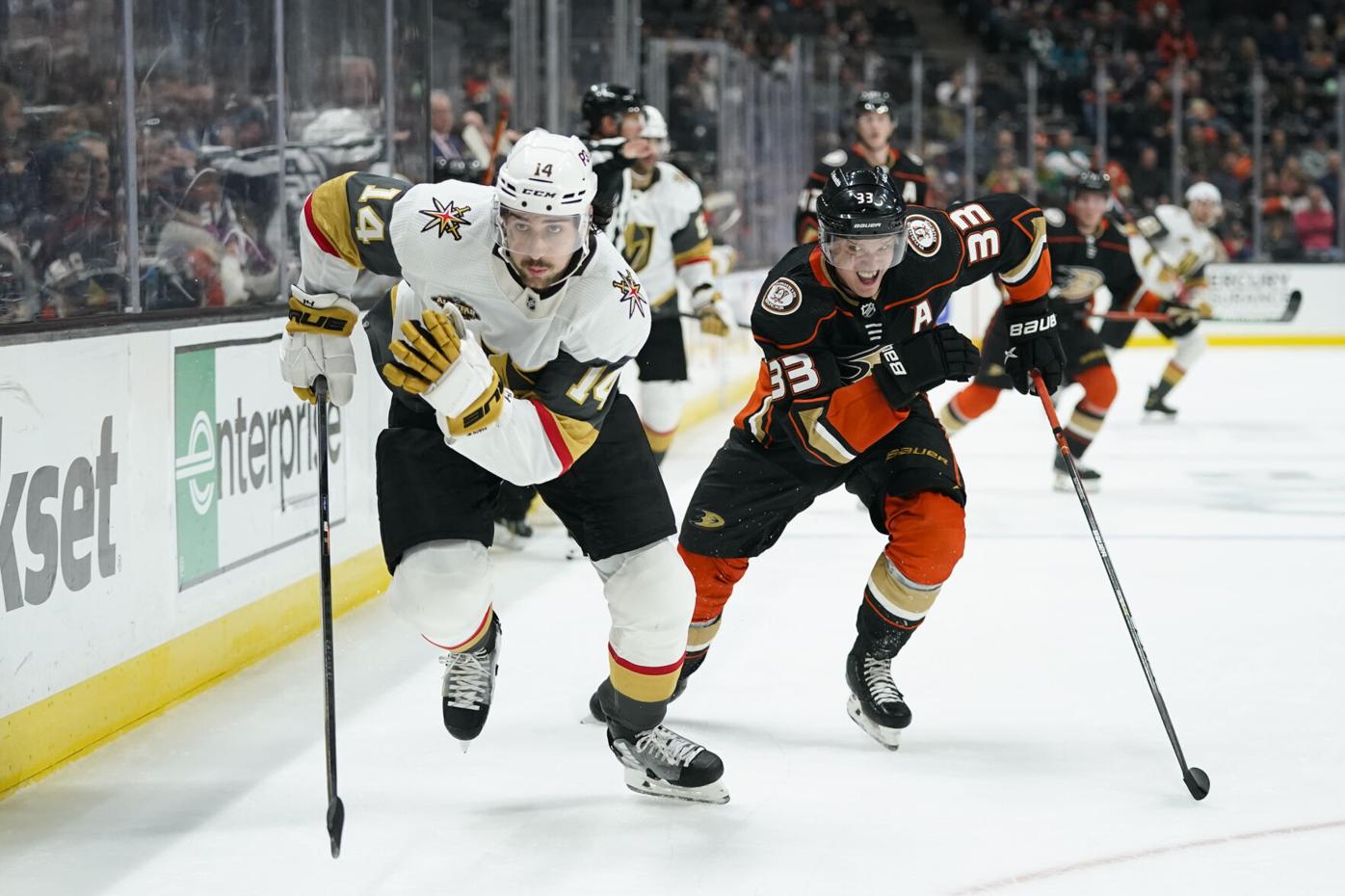 Troy Terry scored his 15th goal during Anaheim’s four-goal second period, and Trevor Zegras and Sonny Milano had three assists apiece in the Ducks’ 6-5 victory over the Vegas Golden Knights on Wednesday night.

Rickard Rakell, Josh Manson and Hampus Lindholm also scored in the second period for the Ducks, who have won 11 of 15. They claimed back-to-back victories over Pacific Division rivals Los Angeles and Vegas in one of the most impressive stretches of their rebound season to coach Dallas Eakins.

“It’s an elite team that was sitting here waiting for us,” Eakins said of the Golden Knights. “We played late last night, and when you have an elite team like that waiting for you, you’re just going to come in and hope for the best. But I was really proud and encouraged how we played. I thought we had lots of energy, lots of legs.”

Jamie Drysdale scored in the third period and Isac Lundestrom added a shorthanded empty-net goal for Anaheim. Anthony Stolarz made 34 saves as the Ducks matched the Golden Knights at their trademark speed-based transition offensive game.

“We obviously know the past couple of years they’ve been an unbelievable team that can transition fast and make a lot of plays, and that’s kind of been our type of game lately,” Zegras said. “We kind of just tried to go out there and do our thing. I thought we played a good 60 minutes.”

Max Pacioretty and Mattias Janmark had a goal and an assist apiece for the Golden Knights, who have lost three of four. Robin Lehner stopped 28 shots and repeatedly kept his team in the game, but Anaheim stayed ahead after blowing a three-goal lead one night earlier.

“That’s not Vegas hockey,” Lehner said. “We’ve got to find a way back to play our type of hockey. We haven’t done it. Lately, I thought when a lot of the guys were out, we were clawing … but we all have to be better, myself included. It’s not good enough.”

Zach Whitecloud and Janmark scored shorthanded for Vegas after the Ducks had taken a three-goal lead. Will Carrier and Reilly Smith also scored for the Golden Knights.

“At the end of the night, if you score four or five goals, you should win,” Vegas coach Peter DeBoer said. “Our attention to detail defensively wasn’t good enough. … We knew that they had some skill, and for me, we’ve got a formula here that works for us, but it doesn’t involve giving up five or six goals. … This group is resilient. I’m just disappointed we put ourselves in that position.”

The Ducks played without captain Ryan Getzlaf, who appeared to injure his left ankle on Tuesday night early in Anaheim’s thrilling 5-4 shootout victory over the rival Kings.

After a scoreless first period, Terry added to his scorching start to the season with his third goal in four games early in the second.

Terry’s 15 goals are tied for the fourth-most in the NHL. He has scored in three of the Ducks’ past four games since his 16-game scoring streak ended with two scoreless outings.

Rakell roofed a shot for his third goal in six games since returning from a 3 1/2-week injury absence, but Carrier got the Golden Knights on the board less than two minutes later with his third goal of the season. Lehner got the second assist for his second point of the year.

A few minutes after Manson got credit for his second goal of the season, Lindholm flung a long shot past a big screen to put the Ducks up 4-1 late.

Drysdale scored on a cross-ice pass from Milano with 13:05 remaining, but Pacioretty’s power-play goal trimmed Anaheim’s lead to one again.

Lundestrom got his empty-netter with 1:04 to play, but Smith added a power-play goal with 29 seconds left.

The Golden Knights won the Pacific rivals’ only previous meeting this season, taking a 5-4 shootout victory in Las Vegas on Oct. 29.

With three goals against Vegas, Anaheim’s defensemen have scored 19 this season. That’s second only to Colorado among NHL blue lines and more than they managed during Anaheim’s entire 56-game schedule last season.

“It’s unbelievable,” Eakins said. “It’s something that we’ve really pushed for from our D, to get up the ice, to be ready to hammer the puck from the blue line.”