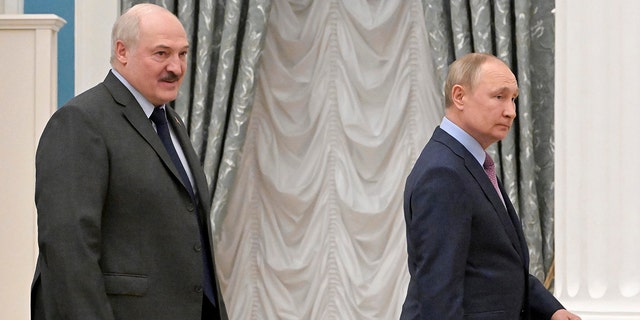 Images have emerged of Belarussian President Alexander Lukashenko standing in front of a battle map that appears to show a planned invasion of Moldova, along with Ukraine.

Lukashenko, a close ally of Russian President Vladimir Putin, was reportedly addressing his security council Tuesday while standing in front of a battle map of Ukraine.

The map appeared to show troop movement plans and infrastructure targets in Ukraine, as well as targets in Moldova’s breakaway region of Transnistria.

Some of the Russian lines of attack in the map have already taken place, while others are yet to occur, including an incursion into Moldova — a former Soviet country and Ukraine’s neighbor to the south — from the port city of Odessa.

Russia has already used Belarus as a location from which to send its troops quickly across the border into Ukraine, after insisting the large number of forces assembled there were for joint military drills.

Reports have emerged this week that Belarus is preparing to send troops into Ukraine in support of the Russian invasion.

The country’s close ties to Moscow in the attack prompted the U.S. State Department to suspend operations Monday at its embassy in Belarus.

The European Union also announced plans on Monday to impose new sanctions on Belarus over its role in the war, including measures against exports, oligarchs and banks in the country.

Belarussian state-run Belta news agency reported that Lukashenko said none of the country’s military units had yet moved into Ukraine, but could mobilize in two to three days if needed, as reported by the Daily Express.

The Pentagon, meanwhile, has said it had not yet seen signs of Belarussian troops in Ukraine.