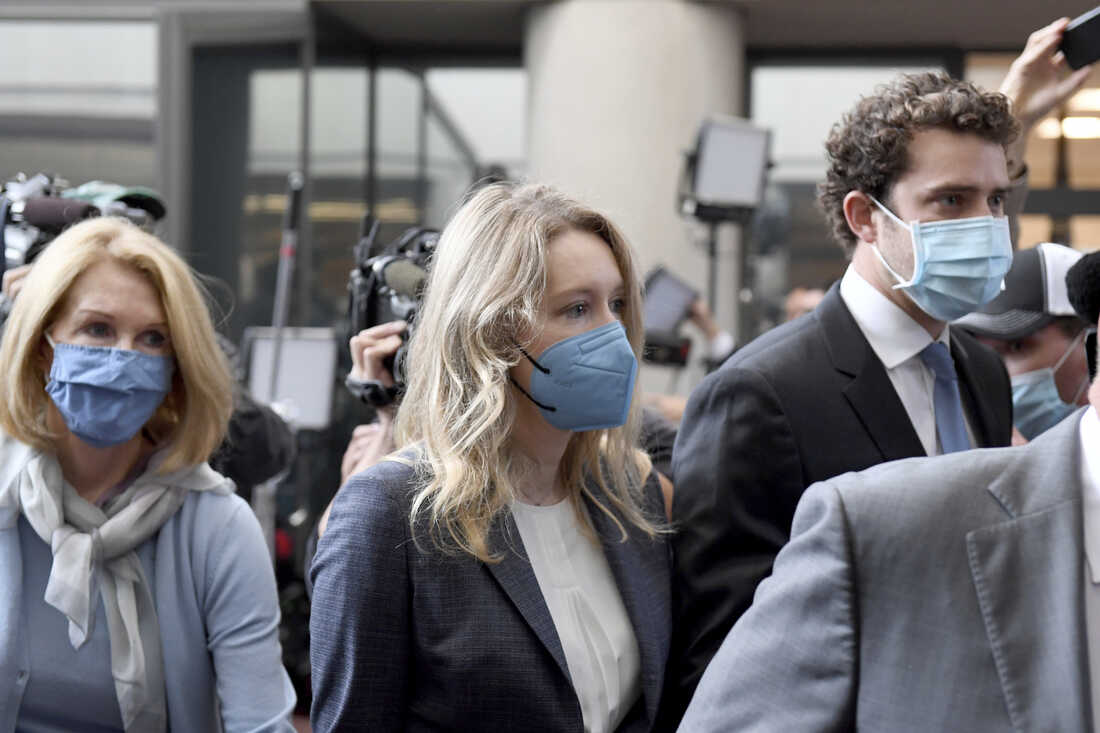 Jurors in the fraud trial of Elizabeth Holmes heard vastly different portrayals on Wednesday of the onetime whiz kid who amazed Silicon Valley with promises of biotech breakthroughs at her company, Theranos.

In a stinging opening statement on Wednesday, federal prosecutors described Holmes as a manipulative fraudster who duped investors and patients alike and knew the whole time that she was hoodwinking them.

“This is a case about fraud, about lying and cheating to get money,” said Assistant U.S. Attorney Robert Leach. “It’s a crime on Main Street, and it’s a crime in Silicon Valley.”

Defense lawyers for Holmes responded by painting a different picture: one of a hardworking, young startup executive who believed in the mission of the company, only to see it buckle in the face of business obstacles.

They argued that she placed blind faith in the No. 2 executive at the company and overly trusted lab directors, who the defense team says were legally responsible for how the labs were run.

“Theranos failed for a lot of reasons, but it failed in part because it made mistakes,” defense lawyer Lance Wade said. “Ms. Holmes made mistakes, but mistakes are not crimes. A failed business does not make a CEO a criminal.”

Holmes, 37, could spend as much as two decades behind bars if the jury convicts her in what is expected to be a 13-week trial. She is charged with 10 counts of wire fraud and two counts of conspiracy to commit wire fraud.

Holmes became the world’s youngest self-made billionaire through her years-long pitch of Theranos, a biotech company she founded at age 19 after dropping out of Stanford. The company reached a valuation of $9 billion on the basis that its blood-testing equipment would upend modern medicine. The company claimed to have developed a revolutionary blood test that could scan for hundreds of diseases with just a tiny pinprick of blood.

But Theranos imploded after a series of investigative stories in the Wall Street Journal starting in 2015 that spurred federal regulators to launch probes of the company. The dramatic fall from grace for Holmes has spawned documentaries, books, podcasts and a Hollywood adaptation in the works.

On Wednesday, Holmes did not speak and jotted down notes on a notepad as she sat, masked, beside her lawyers in a San Jose, Calif., federal courthouse.

Holmes, who recently gave birth to a son, watched on as lawyers duked it out for the start of what may turn out to be the most consequential chapter for her in Theranos’ history.

The problem, prosecutors said, was that Pfizer hadn’t authored the report, despite the company’s letterhead on the top of the document that Holmes circulated to investors, who poured in millions of dollars.

The government plans on calling Pfizer officials as witnesses, in addition to Theranos whistleblowers, investors who say they were defrauded and patients who claim to have received false and misleading results after paying for Theranos blood tests.

“Elizabeth Holmes was well aware of these problems,” Leach said of the faulty test results being produced by Theranos.

As she was championing the supposedly pathbreaking abilities of Theranos blood analyzers, prosecutors say the company was, in fact, using traditional blood-testing machines. Theranos had modified them, but they did not contain the innovative capabilities Holmes claimed.

The defense team vigorously dismissed the idea that Holmes ever had the intent to rip off patients and investors. Instead, the team argued, she was naive, blinded by an indefatigable work ethic that had her spending seven days a week for 15 years in pursuit of her dream. And she believed what she told others about her company, the defense team said.

“Ms. Holmes believed with all of her being that it could transform health care,” Wade said.

Prosecutors argued that Holmes may have had confidence in the company, but that she also knowingly lied to investors and helped steer the media to write glowing articles about the promise of Theranos’ technology, something prosecutors say Holmes used to help land larger and larger investments.

“The scheme brought her fame. It brought her honor, and it brought her adoration,” Leach said. “She was touted as the next Steve Jobs,” he said. “But under the facade of Theranos’ success, there were significant problems brewing.”

Lawyers plan to raise domestic abuse as part of defense

In court filings, defense lawyers have indicated that they will show evidence that Holmes’ former boyfriend and the No. 2 executive at Theranos, Ramesh “Sunny” Balwani, should be blamed. He faces a separate trial set for January.

Holmes’ legal team said Balwani physically and emotionally abused her to the point that it affected her state of mind at the time of the alleged fraud.

“There was another side of Ms. Holmes’ relationship with Mr. Balwani that the public never saw,” Wade told the jury.