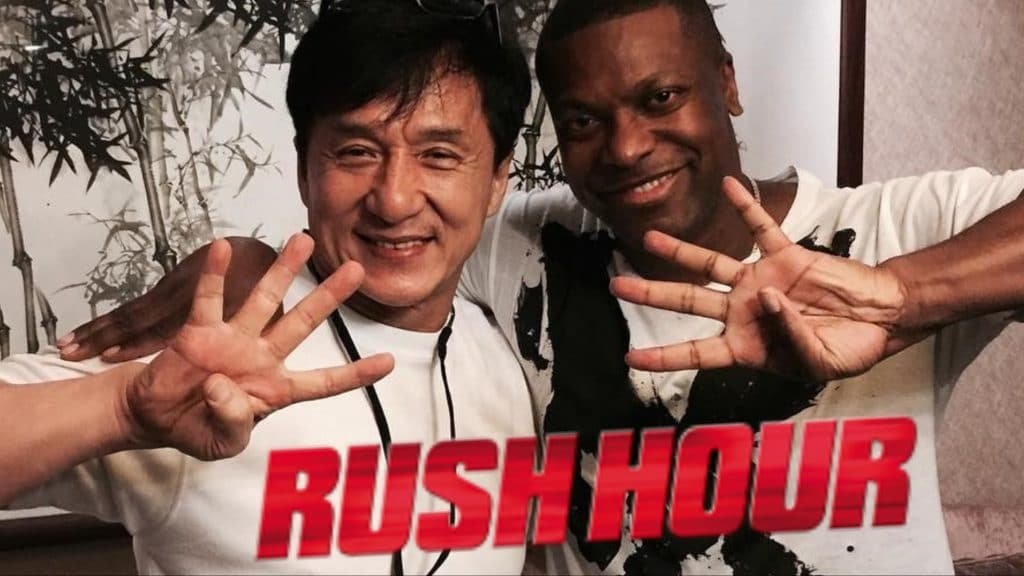 Jackie Chan Says ‘Rush Hour 4’ Is in the Works, Recalls Fight With Bruce Lee: ‘I Wanted Him to Hit Me Again’

“I will see the director tonight and we will be talking about it.” Chan did not confirm who the director will be.

Speaking to his fans, the beloved 68-year-old Hong Kong actor recalled his storied career which included classic films like Police Story (1985), Twin Dragons (1991), Supercop (1992), Drunken Master II (1994), Rumble in the Bronx (1995), and of course his Rush Hour series with Chris Tucker. Chan reflected on the success of the series, sharing that he was quite surprised by the reception of Rush Hour.

To the delight of fans, Chan then took the opportunity to reveal that Rush Hour 4 is in the works, “We’re talking about Rush Hour 4 right now.” The follow-up to Rush Hour 3 was initially teased back in 2018 and it is expected that Jackie Chan and Chris Tucker will reprise their roles as Detective James Carter and Detective Inspector Lee, with Brett Ratner expected to direct the project.

A fourth Rush Hour film has been rumoured for many years, but never confirmed; Chan’s announcement is the most concrete suggestion yet that the series will return. He had previously said in 2017 that he had agreed on a script; and then in 2019 posed with co-star Chris Tucker holding up four fingers.

The first three films in the Warner Bros franchise, released in 1998, 2001 and 2007, were all directed by Brett Ratner, who has not directed a film since allegations of sexual assault were made against him in the #MeToo movement in 2017.

Chan also spoke about another upcoming feature, “Never Let The Rain Stop”, that will shoot in both Saudi Arabia and Morocco. Again not revealing their identity, he said he spoke to the director two months ago, who asked him to talk to the Saudi Film Commission to help get the project off the ground.

Describing the film as “a challenge’, Chan said his character is a doctor who is “somehow helping somebody”.

He also revealed that he will be starring in a Chinese adaptation of a film called The General; he did not confirm which film titled The General this would be, but said he would be playing the character of a “wise man”.

In a 40-minute session that was regularly interrupted by excited fans, the martial arts icon said he plans to “make less action movies, more love stories” in the future. He also recalled his early days in the industry, including working with fellow Asian cinema star Bruce Lee when the latter was an established name. “What Bruce Lee learnt, I knew – I’d been doing those techniques every day,” said Chan. “Bruce Lee is the one who put those kind of things on screen.”

He remembered hitting Lee during an action scene when Chan was one of “about 100” stuntmen, and continuing with the scene – “as a stunt guy, you can get hit every day.” He looked up to see Lee clutching his mouth. “I pretended to be hurt too,” said Chan. “The whole day and night, wherever he went he turned around [and I was there] – I wanted him to hit me again.”

Chan revealed he almost turned down the Rush Hour franchise, as he was tired of being typecast in US films as a police officer. His manager persuaded him by saying the character was “not American-born Chinese, you’re Hong Kong police going to America. You don’t even speak good English.”

After the first film was released, he received a call from Ratner and Tucker, who said “Dude! We’re a huge success, we’re $70m in the first weekend!”

Chan also remembered a confusion over his 2016 honorary Oscar. “[The Academy] called me very secretly – we were on-set filming,” said Chan, who added that the line was so poor that he thought they were calling to ask him to present at the Oscars. “24 hours later, everybody goes ‘congratulations!’ Me?! OK!”

He also said that then-Academy president Cheryl Boone Isaacs told him he was the only person in the history of the Oscars to have received as many as 50 votes from the nominating committee for the honorary prizes.

A frenetic session at Jeddah’s VOX Cinemas also included Chan mimicking his martial arts moves several times on-stage, and responding to several requests that he sing by serenading the audience with a few bars of Elvis Presley’s ‘Can’t Help Falling In Love’.

RSIFF announces its winners this evening (Thursday December 8), with the festival continuing until Saturday 10.