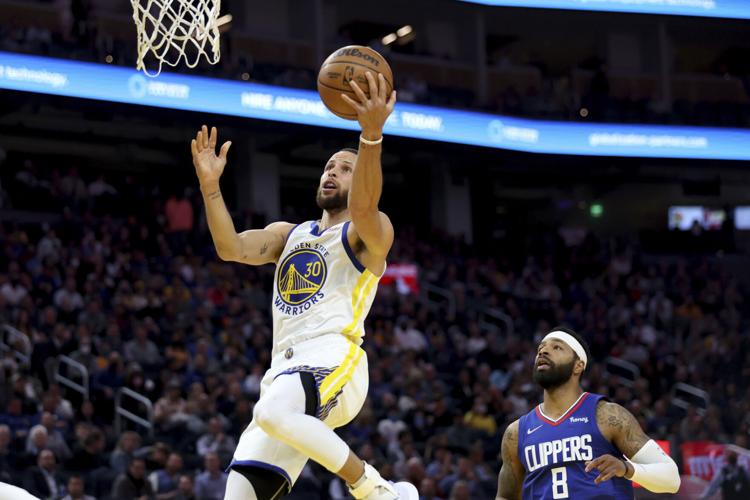 Will Ferrell emailed Steve Kerr a while back, and the Warriors coach didn’t believe it was really the actor writing.

A few exchanges later, Ferrell was warming up with Golden State on a night the Warriors needed a little fun and lightheartedness to forget their recent funk.

Klay Thompson scored 20 points after the comedy star surprised him and teammates before the game, and Golden State snapped a five-game skid by beating the Los Angeles Clippers 112-97 on Tuesday.

“It was fun, and I’m glad we took advantage of it,” Stephen Curry said. “… I think we fed off the energy. I was actually surprised, his form, he actually had some good rotation on the ball, and endless energy. I don’t know how.”

Ferrell went through shooting, passing and dribbling while sporting a vintage-style headband and dressed in his Jackie Moon jersey from the 2008 hoops film “Semi-Pro.” It was a moment that was meant especially for Thompson — who dressed as Moon for Halloween three years ago and loves the movie.

Thompson watched it repeatedly during his two-year rehab from major surgeries on his knee and Achilles tendon, saying: “When I had some dark days I would put that movie on and it would make me smile. I’m very thankful for that film.”

He added, “That was so cool, dreams do come true.”

Kerr knew it meant a lot.

“We exchanged a couple of emails and then concocted the plan,” he said. “He’s a huge Klay Thompson fan and he knows how much Klay loves dressing up as Jackie Moon, so it was just kind of a natural fit and it felt like a good time to do it just to make everybody laugh in a tough stretch of the season.

“He was great. He came into our locker room, made the guys laugh. Everybody loved seeing him and hearing from him. He was hilarious.”

Jordan Poole also scored 20 points off the bench while Andrew Wiggins had 14 points and 11 rebounds for the Warriors, who took up the defensive intensity and energy to win for just the second time in their last nine games to complete a road-home back-to-back.

“We were locked in defensively tonight,” Poole said.

Nicolas Batum scored 17 points to lead the cold-shooting Clippers in a second straight defeat following a five-game winning streak. Los Angeles shot 35.5%, with Reggie Jackson finishing 2 of 14, Terance Mann going 2 for 9 and Ivica Zubac missing all six of his shots.

Golden State rested many regulars for Monday’s makeup game at Denver, with Curry, Thompson and Wiggins all sitting out — and it was a late return to the Bay Area at 1:45 a.m. The Warriors held it together late this time after losing big leads in each of their previous two home games, against Denver and Dallas.

Curry contributed 15 points, five assists and five rebounds, making just 1 of 6 3s, and Splash Brother Thompson began 2 for 9 and missed his initial four 3-point tries before connecting from deep early in the second.

Fellow rookie Moses Moody earned his eighth start after scoring a career-best 30 points in the makeup game at Denver on Monday.

The teams combined to shoot 15 for 50 in the first quarter and were tied at 21.

Warriors: Curry became the Warriors’ all-time steals leader with 1,361. … F Otto Porter Jr. sat out a second consecutive game ill, while G Gary Payton II was sidelined for a third straight by left knee soreness. An MRI exam on the knee was clean, according to Kerr. … Golden State has won 17 of 21 at home vs. the Clippers.

Warriors defensive leader Draymond Green is expected back March 14 against the Wizards from a disk injury in his back that gave him an injured calf. He missed his 28th straight game.

“As many games as we can get is huge, obviously,” Curry said of getting Green back before the playoffs.

Golden State offered encouraging news on second-year center James Wiseman, who has progressed in his rehab from right knee surgery enough that he’s ready to play for the G League Warriors in two games this week: at Stockton on Thursday and vs. the G League Ignite on Sunday at Chase Center.