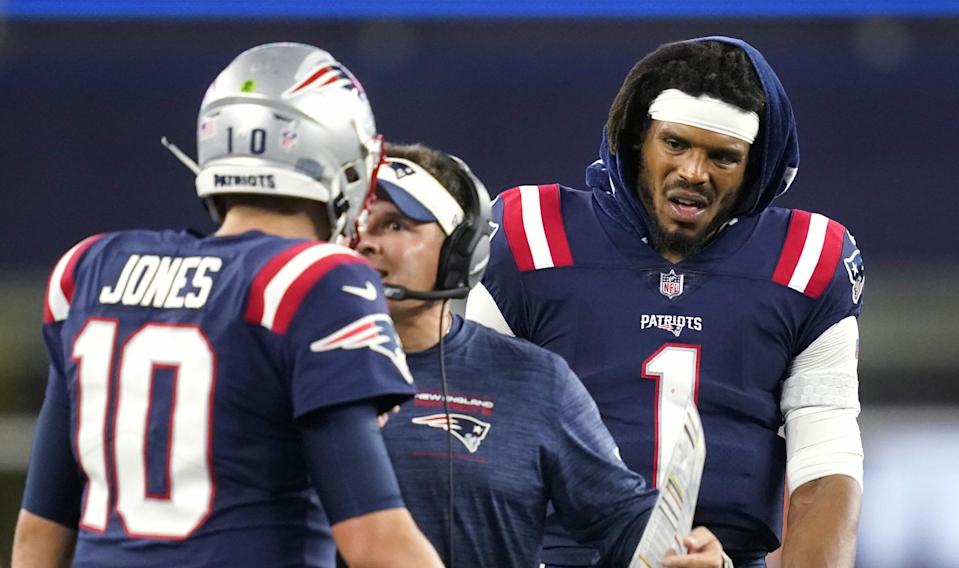 Just like that, the 2021 Patriots season is underway as the team battled through a 22-13 preseason win over the Washington Football Team. After two-plus weeks of training camp action and just a handful of padded practices, the Pats knocked off some rust with their first live action of the new year and with fans back in attendance, it was a night to remember as it felt like a return to football normalcy, both in the stadium and on the field with a promising Patriots squad.

The first preseason game of the year represents a fresh start and while we can’t overreact too much to the first time either team actually tackled anyone, we certainly learned some new things about the 2021 Patriots.

Here are the 5 keys to take away from the first preseason game of the new season!

The Patriots made headlines this offseason with a huge free agency haul and in their first preseason game some of those new faces popped, led by Jonnu Smith on offense and Matthew Judon on defense.

Judon had a particularly impressive series, showing good awareness to drop off his rush and into coverage to force an incompletion and a play later his pressure forced an incompletion, getting a good lick on quarterback Ryan Fitzpatrick. It almost looked like disaster on the following play when Judon got rolled up on, forcing a trip to the medical tent but he soon re-emerged and re-entered the game. The free agent from Baltimore looks like he’ll be a beast on the edge of the defense.

Between him, Dont’a Hightower and Kyle Van Noy, the linebacker group has a distinctly different look than 2020, while new addition Davon Godchaux looks imposing next to Lawrence Guy.

As for Smith, he only caught one pass and also had a holding penalty that negated a big play, but that one catch was just a glimpse of what Smith has been doing this summer, taking a shallow crosser up the sideline for 16 yards. That’s been the most effective play in camp and one that should be run plenty in 2021.

Cam Newton played just two series, completing four-of-seven passes and leading a field-goal scoring drive. Newton received the full starter treatment with a relaxed night before giving way to Mac Jones, who got a notable ovation as he entered the game and immediately showed what we’ve seen thus far in camp, quick decisions and accurate throws. The rookie looked comfortable in his first game action, showing the confidence and presence we’ve seen since he was at Alabama.

Jones just missed Kristian Wilkerson on a deep shot to the end zone that probably should’ve been caught. But otherwise, Mac was methodical, taking what was there and getting the ball out quickly while avoiding any costly mistakes.

Perhaps most impressive was Jones’ command of the no-huddle offense coming out of halftime, completing eight-straight passes before seeing a third-down pass fall incomplete, forcing the offense to settle for a field goal. The offense might’ve come up short, missing out on completing the drive with a touchdown, but the rookie looked in control.

It wasn’t all perfect, as Jones and the offense struggled to move the ball through the rest of the third quarter, with Jones again narrowly missing a deep throw, this time to Gunner Olszewski. Still, he avoided any critical mistakes and that’s a big win in his first pro action as he played just a little over two quarters with Brian Hoyer entering the game in the fourth quarter. Jones completed 13-of-19 passes on the night for 87 yards.

Quinn Nordin is the only undrafted rookie on the team this year and, with Nick Folk out, has been making a push in the kicker competition over the last week.  Nordin continued to help his cause against Washington, making field goals of 35 and 50 yards that gave the Pats a 6-0 lead in the first half.

Nordin would pick right back up in the second half, capping off an impressive opening drive with a 40-yarder while accounting for all of New England’s initial nine points. But after the Patriots scored the first touchdown of the game in the fourth quarter, Nordin would miss the extra point attempt. He’d bounce back making his final extra point of the game.

If the rookie continues to make all his kicks he’s going to find himself a roster spot, but the missed extra point hurt an otherwise perfect game.

Pass defense has work to do, penalties add up

Three of Washington’s drives in the first half went over 10 plays, as the Patriots defense struggled to get off the field, allowing seven conversions on 11 third downs over that period. Obviously, it’s the preseason and without much scheming going on it’s hard to get too worked up, but the Football Team’s long sustained drives coming against many of New England’s top defenders was a bit troublesome.

When third-stringer Steven Montez entered the game in the third quarter, the Patriots forced a three-and-out with Carl Davis notching a sack to help get them off the field.

JoeJuan Williams’ fourth-quarter interception was a nice footnote to an underwhelming day against the pass, especially in the first half.

Overall, the Pats took nine penalties on the night, another sloppy element that will certainly be cleaned up before the regular season gets underway.

Kristian Wilkerson (six catches, 39 yards) and J.J. Taylor (five catches, 31 yards), were the Patriots’ two most impressive young weapons in the game. Wilkerson continued his hot start to training camp, making some reliable catches and showing good chemistry with Mac Jones, while Taylor showed how hard he runs despite his size, picking up plenty of yards after contact. Taylor also chipped in a 29-yard kickoff return, showing he can contribute in multiple ways.

Both players are firmly on the roster bubble but in their second seasons they’re both showing that they’ve made strides, carrying over their performances on the practice field over to the game field. With the long-term needs at receiver and running back, Wilkerson and Taylor will continue to be players to keep an eye on.

Rhamondre Stevenson made his case in the second half with 125 rushing yards and two touchdowns, including a 91-yard touchdown scamper that put a nice exclamation point on the end of the victory. Damien Harris and Sony Michel are two very good options, but Stevenson looks like he could push for carries after an impressive debut.