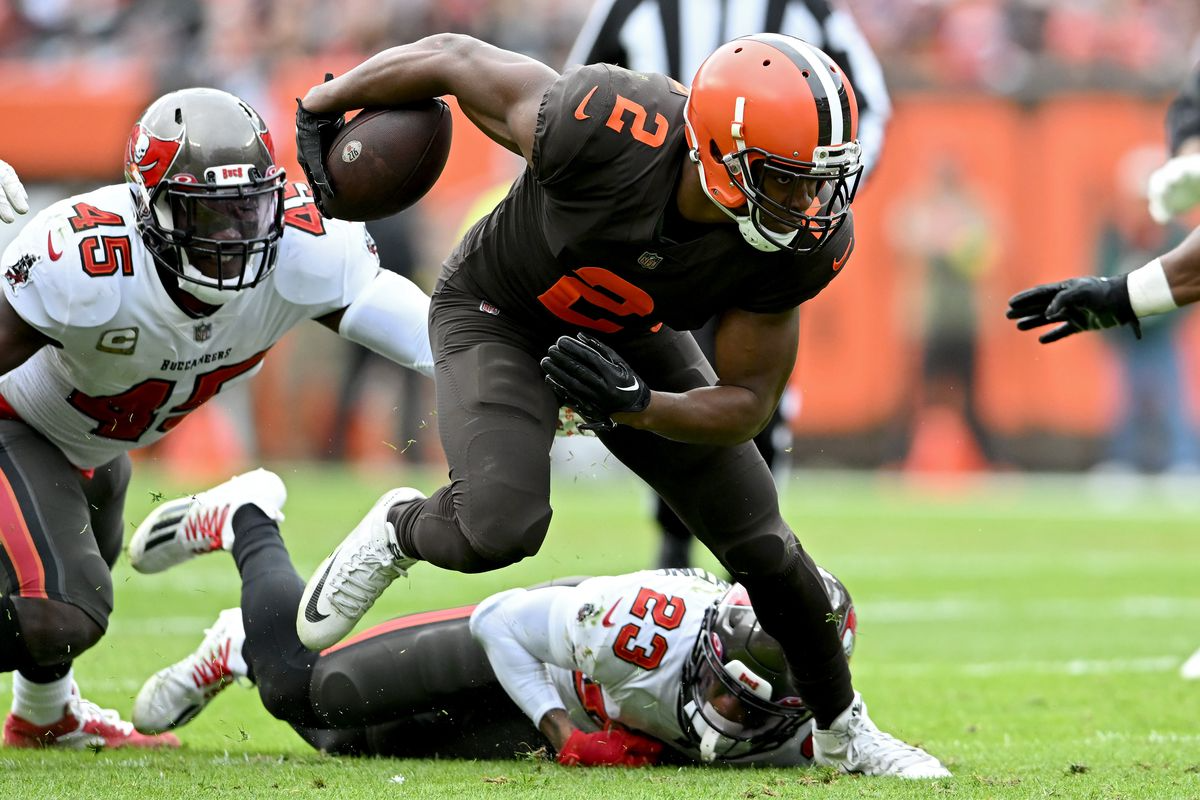 The Cleveland Browns scored touchdowns on their first and last possession of regulation, the latter of which tied it at 17-17 and sending the game to overtime. It looked like the game might end in a tie, but then Brissett found Cooper for a 45-yard gain from midfield before Chubb finished the game for a 23-17 win!

With the score tied 17-17 at the end of regulation, the Buccaneers won the coin toss and began overtime with the ball.

The Browns, though, earned a defensive stop against Brady and Co. to begin OT.

All-Pro defensive end Myles Garrett drew an illegal hands to the face penalty from left tackle Donovan Smith, then hit Brady as he threw incomplete on the next snap.

The Bucs punted, but instead of taking advantage, the Browns stalled on offense without gaining a first down.

Garrett ended the next series by sacking Brady on third down, forcing the Bucs to punt. The Browns took control at their 29 with 2:45 left to play and marched for the win.

With 3:29 left in overtime, Bucs All-Pro right tackle Tristan Wirfs suffered an injury and was carted off the field.

During the same play, Browns safety Ronnie Harrison Jr. jumped as he rushed and was slammed to the ground by Bucs offensive lineman Nick Leverett with 14:11 left in the fourth quarter. Harrison was shaken up and visited the blue medical tent on the sideline.

Harrison, though, returned to the game.

Why the Browns won

Cleveland’s defense kept the home team in the game when its offense went in a lull for most of the second half. Led by Myles Garrett (who had 1.5 sacks and several other hits/pressures), the Browns sacked Brady three times after halftime after not getting to him in the first half. The pass rush contributed to the Buccaneers going just 4 of 15 on third down. It also led to the Buccaneers punting on their second drive in overtime, thus setting up the Browns’ game-winning drive.

The Browns got just enough clutch plays from their offensive quartet of Brissett, Chubb, Cooper and Njoku. Brissett withstood heavy pressure (particularly in the second half) to go 23 of 27 for 210 yards. Chubb rumbled for 116 yards that included his 28-yard run to set up Njoku’s touchdown. Cooper caught seven passes, none bigger than his 46-yard grab in overtime.

Why the Buccaneers lost

Tampa Bay was unable to put Cleveland away when it had the chance. Despite dominating the third quarter (Cleveland had just 11 total yards during the quarter), the Buccaneers found themselves in a one-possession game late in regulation.

Leaky pass protection and a lack of run support (Rachaad White ran for 64 yards but 35 of that was on one run on Tampa Bay’s opening drive) contributed to the Buccaneers’ offensive plight. Those issues undoubtedly impacted Brady, who finished the game with a good but not great stat line of 246 yards and two touchdowns on 29 of 43 passing. Brady surely would like to have several throws back, including a few deep shots to Mike Evans that just missed the mark.

They were stellar for most of the game, but the Buccaneers defense was unable to seal the deal at the end of both regulation and overtime. It allowed plays of 12, 15, 17 and 46 yards on the Browns’ last two scoring drives.

Along with losing the game, Tampa Bay suffered another loss when offensive tackle Tristan Wirfs was carted off the field during overtime.

What is Tom Brady’s record vs the Browns?

This will be the ninth time all-time great quarterback Tom Brady has played against the Browns. In the previous eight meetings, Brady’s teams are 7-1 against Cleveland. Brady first played the Browns in 2001. Most recently he played the Browns in 2019. The only time the Browns have beaten Brady was Week 9 of the 2010 season. The Browns won 34-14 thanks to running back Peyton Hillis rushing for 184 yards and two touchdowns.

Stadium security personnel caught a skunk that was on the loose inside FirstEnergy Stadium during the game.

The critter was searching for food and hid under a step in the lower bowl section above the tunnel leading to Cleveland’s locker room. The skunk was trapped with a box and released unharmed.

Large circular rings of tire tracks were still visible on Cleveland’s field after an intruder broke into the stadium earlier in the week and drove a vehicle on the turf.

The unknown suspect, who broke into the stadium on Monday night, caused superficial damage and divots.

Police are investigating the incident, which forced the stadium’s maintenance crew to make repairs to get the surface game ready.

Buccaneers: RT Tristan Wirfs was carted off the field in OT after sustaining an apparent serious leg injury. He favored the leg while walking in the locker room. “You hope it’s not as bad as it looks,” coach Todd Bowles said.

Browns: CB A.J. Green (head) left the field after making a low tackle late in the first quarter. An official noticed Green staggering and escorted him off.

Browns: Watson plays his first game in 700 days against the Texans, who drafted him in 2017.