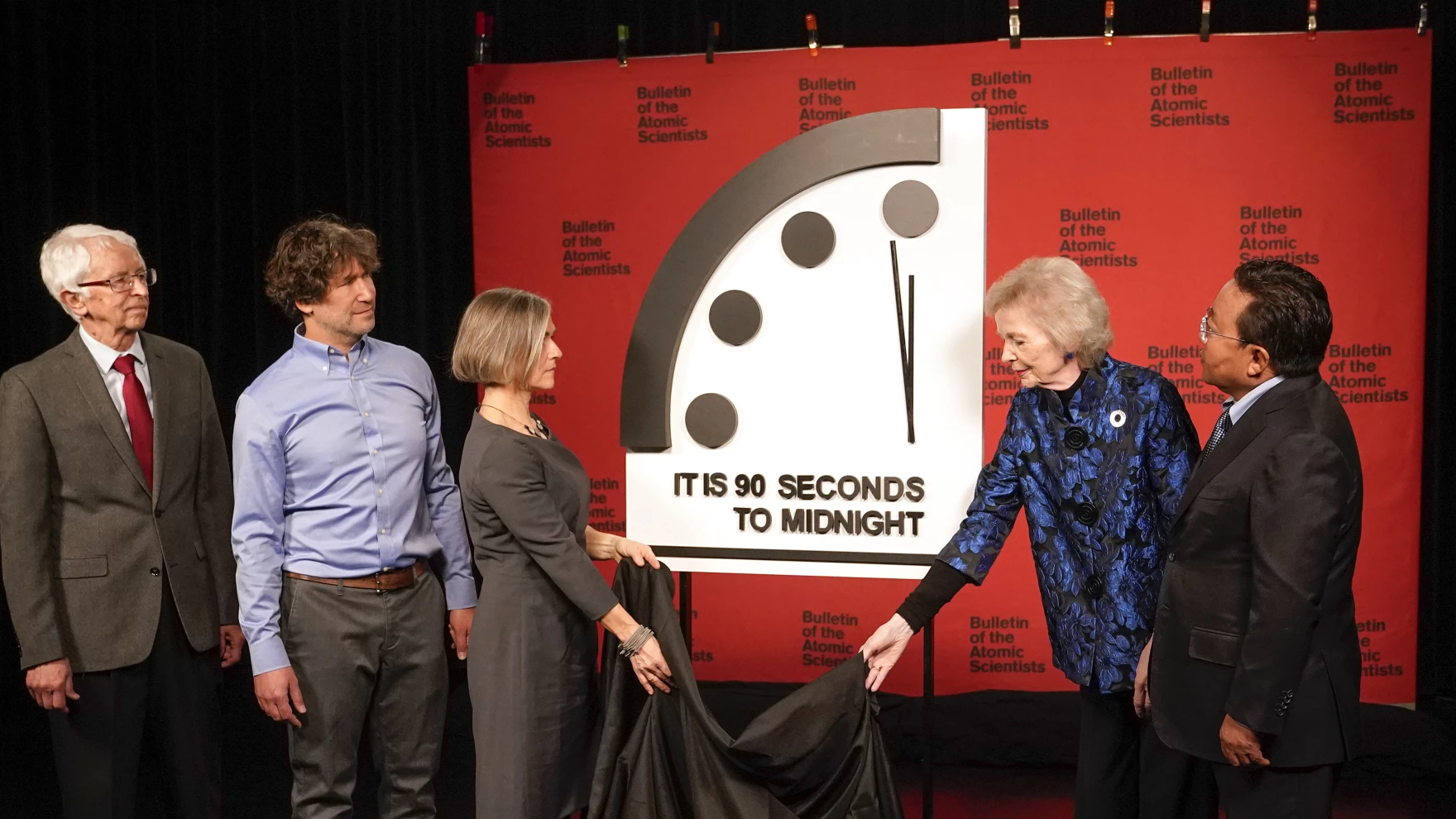 The Bulletin of the Atomic Scientists announced that it has moved the minute hand of the Doomsday Clock to 90 seconds to midnight. From left,, Siegfried Hecker, Daniel Holz, Sharon Squassoni, Mary Robinson and Elbegdorj Tsakhia with the Bulletin of the Atomic Scientists remove a cloth covering the Doomsday Clock at a news conference at the National Press Club in Washington on Tuesday.

The world is closer to catastrophe than ever: the Doomsday Clock, the metaphorical measure of challenges to humanity, was reset to 90 seconds before midnight on Tuesday.

The science and security board of the Bulletin of the Atomic Scientists said the move — the closest to widespread calamity humanity has ever been judged to be — was “largely, though not exclusively” due to the war in Ukraine.

The scientific body evaluates the clock each January. This is the first full update since Russia’s full-scale invasion of Ukraine began last February, triggering a war in Europe and a new flood of refugees.

The scientists behind the Doomsday Clock use it to alert humanity to threats from within — the perils we face from our own technologies, particularly through nuclear war, global climate change and biotechnology.

Of the new update, Mary Robinson, former U.N. High Commissioner for Human Rights, said: “The Doomsday Clock is sounding an alarm for the whole of humanity. We are on the brink of a precipice. But our leaders are not acting at sufficient speed or scale to secure a peaceful and livable planet.”

Much of Tuesday’s announcement focused on Russia, and President Vladimir Putin’s threat to use nuclear weapons and his refusal to accept anything other than victory in Ukraine.

“Even if nuclear use is avoided in Ukraine,” said Steve Fetter, dean of the graduate school and professor of public policy at the University of Maryland, “the war has challenged the nuclear order — the system of agreements and understandings that have been constructed over six decades to limit the dangers of nuclear weapons.”

Fetter also noted that the U.S., Russia and China are working to modernize their arsenals.

The Chicago-based Bulletin was founded in 1945 by Albert Einstein and scientists who helped develop the first atomic weapons in the Manhattan Project. Over the years, its members have included dozens of Nobel laureates.