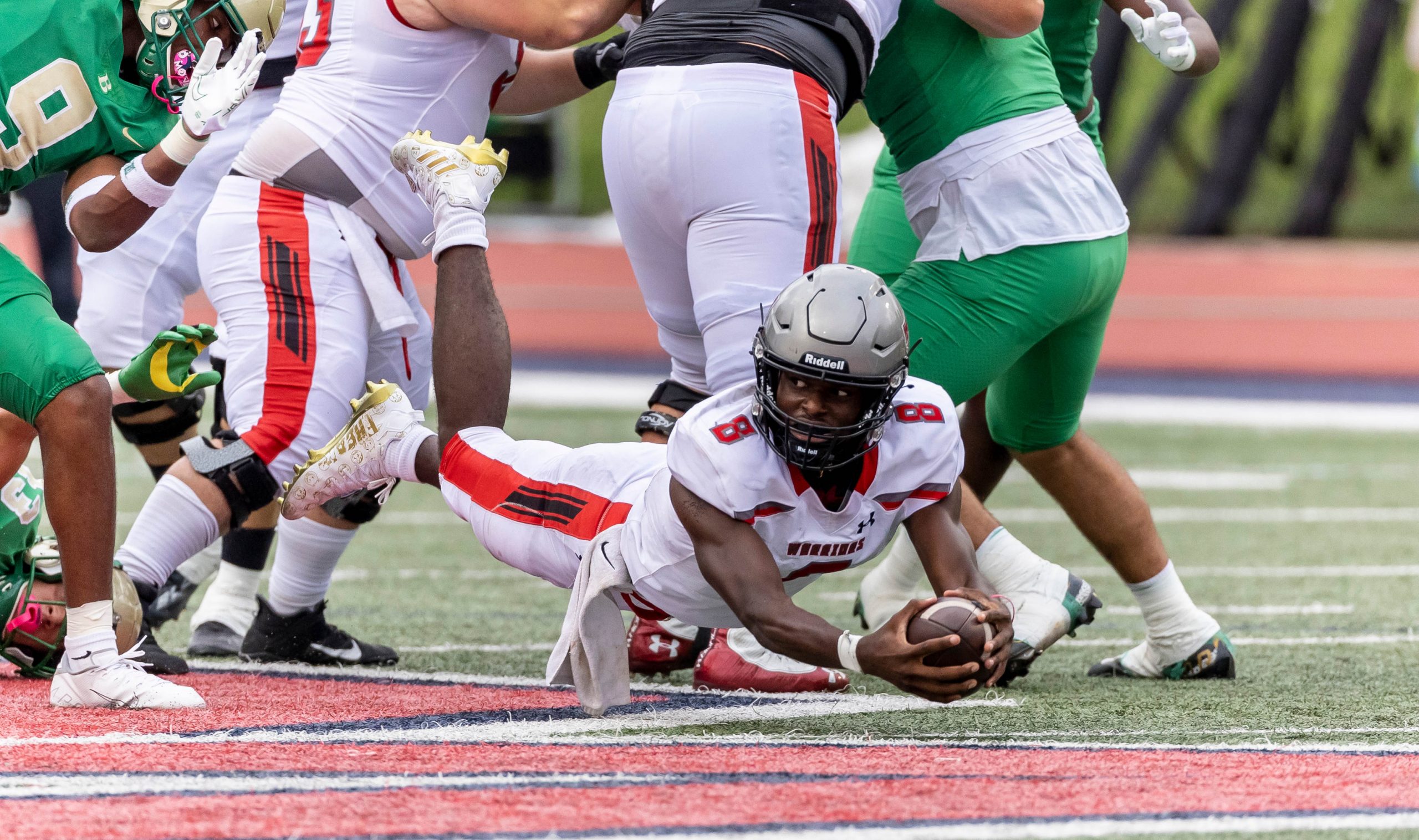 Friday night was a learning experience for the three-time reigning Alabama state 7A champions.

Unfortunately for Thompson, the teacher was Buford, its Georgia counterpart.

A game that opened with fireworks and a near military flyover was a defensive battle for a half, but a tiring Thompson defense eventually caved to the Wolves.

It was Buford’s stars — senior running back Justice Haynes, junior safety and receiver KJ Bolden and 2024 EDGE Eddrick Houston — that led the way in the 5th annual Freedom Bowl, opening their season with a 38-7 win.

“You go back and count the errors it’s a 10-to-nothing game and we’re in the ball game,” Thompson head coach Mark Freeman said. “It’s inexperience. We got to go back and get ourselves better. We gotta do a better job of coaching our kids during the week to give them something so that they understand what they’re doing,”

Thompson, which was replacing its starting quarterback and multiple skill position pieces, including 2021′s Mr. Football in wide receiver Ryan Peppins, stumbled against the top-ranked team in Georgia. New QB Zach Sims struggled to find a clean pocket and, while a switch to eighth-grader Trent Seaborn provided Thompson’s only score, a Haynes’ 97-yard kickoff return torpedoed any momentum swing.

The Thompson defense, led by senior 5-stars Peter Woods (Clemson) and Tony Mitchell (Alabama), tried to make an impact play. Mitchell was aggressive in coming forward to stop the run. So was Woods, who often had a trio of blockers around him by the time the whistle blew.

Buford alternated between running away from Woods and using a stable of running backs, namely Haynes and sophomore Justice Baker to keep legs fresh and the Warriors guessing. Dylan Wittke and Buford’s passing game wasn’t as sharp, throwing an interception to sophomore Anquon Fegans when the receiver ran the wrong route, but Wittke scrambled enough to keep drives alive in the second half.

Thompson’s biggest opportunity was in the second quarter after running back Michael Dujon carried a handoff to the red zone. Though the ensuing fumble, one of five Thompson turnovers, was the start of a trend.

Justice Haynes (Buford). Haynes recorded the school’s first kick-return touchdown in three years with his run in the second half. He then finished the game off with a 20-yard scamper past Mitchell in the fourth quarter. He tallied with 93 rushing yards on 17 carries, his long from scrimmage a 40-yarder.

Buford’s most successful drive, either offense’s really, was its first possession of the game. A few key conversions and short completions set up Wittke and Bolden down the left sideline. Thompson appeared to be dropping into coverage but a blown assignment in the secondary gave Bolden plenty of space to jog in, untouched, to score the game’s lone offensive touchdown in the first three quarters.

Wittke completed 10-of-15 passes for 125 yards and an interception. KJ Bolden caught three passes for 58 yards and a touchdown. Thompson — Peter Woods recovered a fumble. Senior KB Williams caught a pass from Trent Seaborn for a touchdown.

combined state championships both teams had in the last three years entering Friday night’s game. Thompson has taken over Hoover as the top team in the Birmingham area and become an AHSAA Class 7A powerhouse. Buford, is dominant in its own right, winning three straight titles across two classifications before moving up to Georgia’s 7A this fall.

“I love it,” Haynes said of his teammate’s efforts. “That’s how it’s going to be at Bama. There are going to be great players all around me. Each and every day we’re 1-on-1. We push each other. … Just to be able to compete with makes me a better player.”

“I thought our defense played absolutely tremendous,” Freeman said. “They were on the field a lot, got worn down at the end. … We got a lot to come back and work on. We knew this week and next week would be hard because of the inexperienced players.”

Thompson will again be on the national stage. On Saturday, Aug. 27, the Warriors will host Lipscomb (Tenn.) Academy at 8 p.m., the broadcast airing live on ESPNU as a part of the Geico High School Kickoff. Buford will play its first home game next Friday when it welcomes North Carolina’s Mallard Creek.