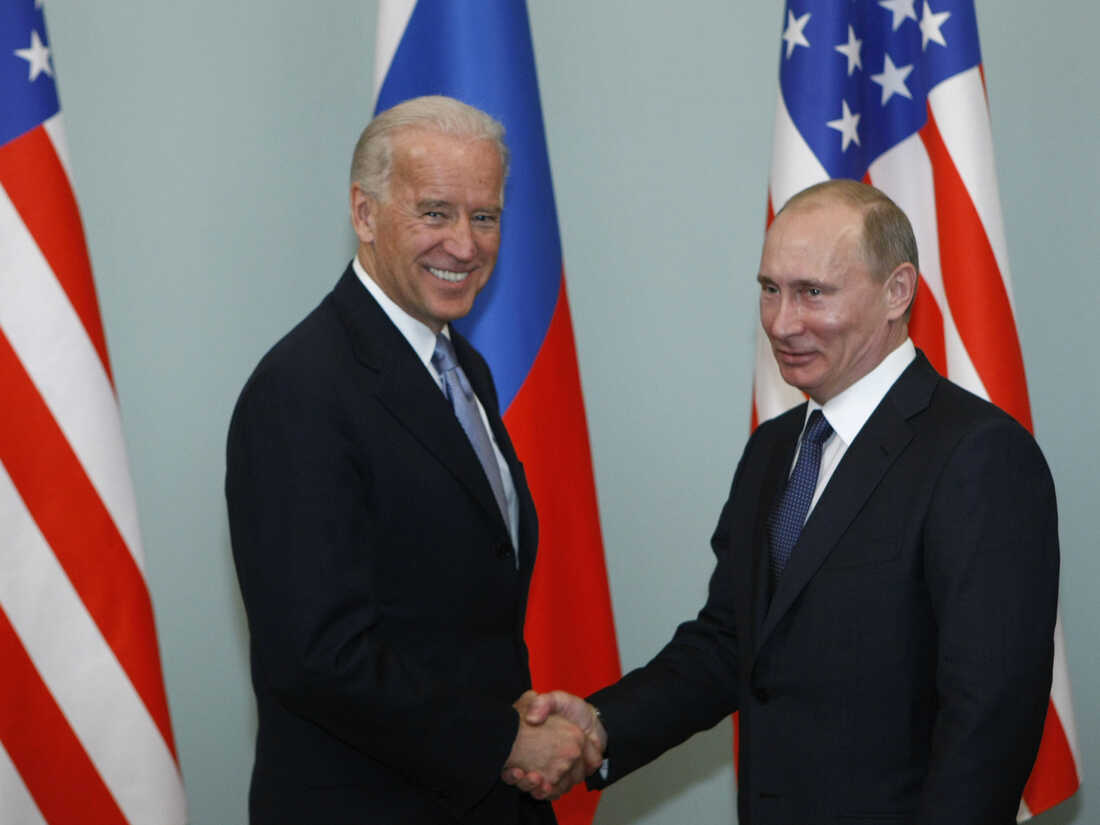 When the Russian leader ordered his nuclear forces into “special combat readiness,” the U.S. could have gone on high alert. Instead, the administration tried not to inflame him.

When Vladimir V. Putin declared Sunday that he was putting his nuclear forces into “special combat readiness” — a heightened alert status reminiscent of some of the most dangerous moments of the Cold War — President Biden and his aides had a choice.

They could match the move and put American forces on Defcon 3 — known to moviegoers as that moment when the Air Force rolls out bombers, and nuclear silos and submarines are put on high alert. Or the president could largely ignore it, sending out aides to portray Mr. Putin as once again manufacturing a menace, threatening Armageddon for a war he started without provocation.

For now, at least, Mr. Biden chose to de-escalate. The American ambassador to the United Nations reminded the Security Council on Sunday afternoon that Russia was “under no threat” and chided Mr. Putin for “another escalatory and unnecessary step that threatens us all.” The White House made it clear that America’s own alert status had not changed.

But to many in the administration, who spoke on Sunday on the condition of anonymity, it was a stark reminder of how quickly the Ukraine crisis could spin into a direct superpower confrontation — and how it may yet do so, as Mr. Putin tests how far he can go and threatens to use the ultimate weapon to get there.

And his outburst highlighted anew the question, coursing through the American intelligence community, about the state of mind of the Russian leader, a man previously described as pragmatic, calculating and cunning. The former director of national intelligence, James R. Clapper Jr., said in public today what some officials have been saying in private since the Russian leader began accusing Ukraine of genocide and claiming it was developing nuclear weapons of its own.

“I personally think he’s unhinged,” Mr. Clapper said . “I worry about his acuity and balance.”

Others wonder if Mr. Putin wants to create that impression, to add to Washington’s unease. Similar concerns drove the decision not to have Mr. Biden, in Delaware for the weekend, respond to Mr. Putin’s threats. It was the second time in a week that Mr. Putin has reminded the world, and Washington, that he has a massive arsenal and might be tempted to use it. But what made the latest nuclear outburst notable was that it was staged for television, as Mr. Putin told his generals that he was acting because of the West’s “aggressive comments” about Ukraine. Russia’s most senior military officer, Valery Gerasimov, sat stone-faced as Mr. Putin issued his directive, leaving some wondering what he was thinking, and how he might respond.

“It was bizarre,” said Graham T. Allison of Harvard University, whose study of the Kennedy administration’s handling of the Cuban missile crisis, “Essence of Decision,” has been read by generations of international relations students — and many of the national security staff surrounding Mr. Biden today. Mr. Putin’s citation of “aggressive comments” as a justification for putting one of the world’s largest nuclear arsenals on alert status seemed both disproportionate and puzzling, he said. “It makes no sense.”

Professor Allison, who worked on the project to decommission thousands of nuclear weapons that once belonged to the Soviet Union, which centered on Ukraine, said the incident is “adding to the worry that Putin’s grasp on reality may be loosening.”

Now the question is how General Gerasimov will translate Mr. Putin’s vaguely worded order for “special combat readiness” into action. The answer should be clear in the next day or two.

A vast nuclear-detection apparatus run by the United States and its allies monitors Russia’s nuclear forces at all times, and experts said they would not be surprised to see Russian bombers taken out of their hangars and loaded with nuclear weapons, or submarines stuffed with nuclear weapons leave port and head out to sea.

Both Russia and the United States conduct drills that replicate various levels of nuclear alert status, so the choreography of such moves is well understood by both sides. A deviation from usual practice would almost certainly be noticeable.

The ground-based nuclear forces — the intercontinental ballistic missiles kept in silos by both nations — are always in a state of readiness, a keystone to the strategy of “mutually assured destruction” that helped avoid nuclear exchanges at even the most tense moments of the Cold War.

Whatever one thinks of Mr. Putin’s judgment, the decision to put the forces on alert in the midst of extraordinary tensions over the invasion of Ukraine was highly unusual. It came only a few days after he warned the United States and other NATO powers to stay out of the conflict, adding that “the consequences will be such as you have never seen in your entire history.”

It has put an end, at least for now, to the discussions between Russia and the United States about what they do in four years, when the one remaining nuclear treaty between the two countries, called New START, expires. The treaty limits each side to 1,550 deployed strategic weapons, down from tens of thousands at the height of the Cold War. But that does not include smaller, tactical weapons designed for battlefield use, a major worry in the current crisis. Just as Mr. Putin claimed last week that the United States had designs to put such weapons on Ukrainian territory — one of his many justifications for the invasion — American officials fear that Mr. Putin’s next move is to put them in Ukraine, if he succeeds in seizing the country, and in Belarus.

Until last week, the two nations were meeting regularly to discuss new arms-control regimes, including a revival of the Intermediate-Range Nuclear Forces Treaty, which President Donald J. Trump abandoned in 2019. But the United States said last week that it was suspending those talks.

The immediate concern is that a heightened alert level, by design, loosens the safeguards on nuclear weapons, making it more possible that they could be used, by accident or design.

In recent years, Russia has adopted a doctrine that lowers the threshold for using nuclear arms, and for making public threats of unleashing their powers in deadly atomic strikes.

“It’s what he does,” Hans M. Kristensen, the director of the Nuclear Information Project at the Federation of American Scientists, a global policy think tank in Washington, said in an interview. “It’s verbal saber-rattling. We’ll see where he goes with it. This war is four days old and he’s already made nuclear threats twice.”

Mr. Kristensen noted that in 2014, when Mr. Putin annexed Crimea, the peninsular part of southern Ukraine that juts into the Black Sea, the Russian president also raised the possibility that his forces might turn to atomic weapons. He recalled that when Mr. Putin was asked how he would react to retaliatory sanctions by the West, he “said he was willing to put his nuclear forces on alert.”

Matthew Kroenig, a professor of government and foreign service at Georgetown University who specializes in atomic strategy, said history bristled with cases in which nuclear powers had threatened to unleash their arsenals on one another. He pointed to the Berlin crisis of the late 1950s, the Cuban missile crisis of 1962, a border war between the Soviet Union and China in 1969, the Arab-Israeli war of 1973, and a war between India and Pakistan in 1999.

He also noted that Mr. Trump had leveled similar threats against Kim Jong-un, the North Korean leader, after his armed forces conducted a series of long-range missile tests. In his first year in office, 2017, Mr. Trump threatened “fire and fury like the world has never seen.”

Mr. Putin’s outburst reminded many nuclear experts of one of Mr. Trump’s tweets, in which he noted: “North Korean Leader Kim Jong Un just stated that the ‘Nuclear Button is on his desk at all times.’ Will someone from his depleted and food starved regime please inform him that I too have a Nuclear Button, but it is a much bigger & more powerful one than his, and my Button works!”

Mr. Trump later insisted that the threat was calculated, and that it had brought Mr. Kim to the negotiating table for a series of three high-profile meetings between the two leaders. But the talks collapsed, and Mr. Kim’s nuclear stockpile is now significantly larger, by most unclassified estimates, than it was before Mr. Trump issued the threat.

“Nuclear-armed states can’t fight nuclear wars because it would risk their extinction, but they can and do threaten it,” Dr. Kroenig noted on Sunday. “They play games of nuclear chicken, of raising the risk of war in hopes that the other side will back down and say, ‘Geez, this isn’t worth fighting a nuclear war over.’”

Mr. Kristensen of the Federation of American Scientists said the threats could be empty unless matched with evidence that nuclear weapons are being removed from storage and prepared for action.