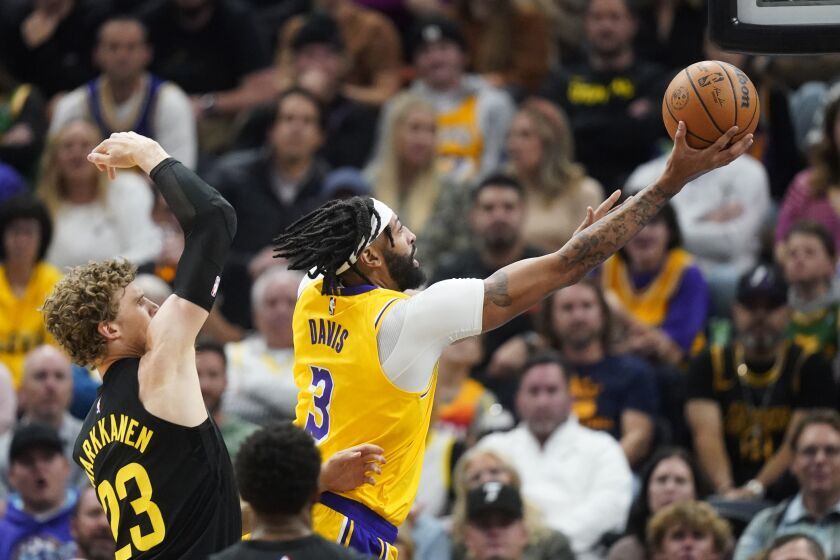 Ten games into the Lakers’ season and their coach, Darvin Ham, still is viewing his team with an eye towards the big picture.

With ownership and management’s support and general understanding of the Lakers’ predicament, Ham can — as he put it — continue “this excavation process of building” the team back into a winner.

But 10 games into the season, are we sure this should be an excavation and not a burial?

For the second time in four days — the Utah Jazz dominated, beating the Lakers 139-116 in a game that wasn’t truly close in the second half.

The Clippers, Kings, and Brooklyn Nets are on the schedule next.

“Obviously, it sucks,” Anthony Davis said. “…Two-and-eight is a hard pill for me to swallow.”

There were significant reasons to think that Monday night in Salt Lake City wasn’t going to be the night where the Lakers would actually start to dig themselves out of the hole they’re in.

LeBron James’ sore left foot kept him off the court on the second night of a back-to-back set. Patrick Beverley missed his second-straight game with an illness, and as if things weren’t hard enough, a third starter, Lonnie Walker IV, also came down with the non-COVID virus that’s ripping through the Lakers’ locker room over the last week.

It’s been a lot to deal with; and it hasn’t even been everything.

“It’s not going to always be like this,” Ham said after the loss. “We’re going to turn the corner. I didn’t come here to lose. …But there is a process to go through.”

James’ absence combined with Davis’ dissatisfaction after his quiet second half against Cleveland on Sunday has to have partially shifted Ham’s big picture outlook to more pressing, urgent matters.

“If a guy says he wants more touches and he’s of the caliber of Anthony Davis, then yeah, my ears are going to perk up and I’m going to see how I can get him the ball more,” Ham said. “I’m also going to communicate with his teammates, the guys who have the ball in their hands, to look for him more.

“…It’s, again, something I’m happy was said. I don’t take it as any sign of disrespect. I just think he’s expressing his willingness and his hunger to want to help the team more. And be more of a threat on that side of the ball. I’m looking forward to giving him a heavy dose of it tonight.”

It was easier to emphasize Davis with three starters absent. Monday, he scored 29 points on a team-high 18 shots. Russell Westbrook, again coming off the bench, scored 22.

But minus 60% of their starting lineup, Ham needed to lean on Kendrick Nunn, Austin Reaves and Wenyen Gabriel in the starting lineup — fresh off of Ham challenging the Lakers’ role players to step up and produce more consistently.

Monday, virtually everyone who played produced — defensively, though, the Lakers again faltered.

Without Beverley and Walker, the Lakers’ perimeter defense certainly took a hit, the Jazz scoring easily just like they did Friday in Los Angeles.

Ham said James hoped to play and that Monday’s absence wasn’t strictly because the team is on a back to back.

“It’s nothing structurally wrong with the foot. It’s just, it gets irritated,” Ham said. “But he’s stepped on people’s feet here and there the last couple of games and he’s tried to manage it the best he can. And we saw tonight as a good opportunity to just rest it.”

It’s been part of James’ relatively rough start to the season.

“Well he hasn’t been scoring as much as he would probably like, and the rest of us as well. But he and I had a great one-on-one conversation this morning at breakfast,” Ham said. “But I got confidence in the kid. For him to be managing his foot and viral infection and 20 years of miles driven throughout this league, and to still come and be in peak performance — that type of shape. He really wants to be out there.”

But whether he’s been out there or not, whether the Lakers defend one night or score the next, they’re just not winning. And all the talk about building, it’ll be tough to get everyone to share that vision.

“We can’t get discouraged,” Ham said. “…It’s too early. We should fight until there’s no time on the clock.”