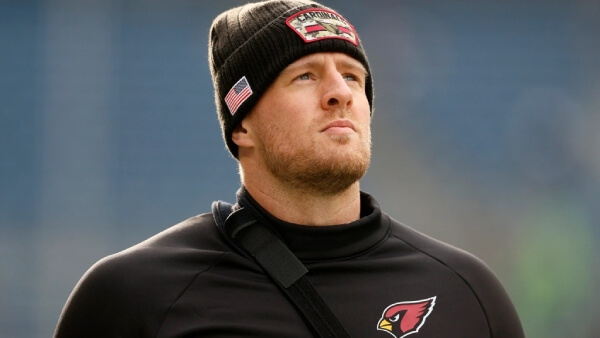 Arizona Cardinals defensive end JJ Watt, one of the greatest defensive players in NFL history, will retire after the 2022 season, he announced on Tuesday.

The defensive star tweeted a picture of his family on Tuesday morning with the caption: “Koa’s first ever NFL game. My last ever NFL home game. My heart is filled with nothing but love and gratitude. It’s been an absolute honor and a pleasure.”

The Cardinals played their final home game of this season on Christmas Day, losing to the Tampa Bay Buccaneers in overtime, 19-16. They conclude the season with games at the Atlanta Falcons and San Francisco 49ers.

Watt, 33, has played for the Cardinals for the past two seasons after signing with Arizona in free agency.

He played for the Houston Texans from 2011-2020 after being a first-round pick out of Wisconsin. His 101 career sacks still are the most in Texans’ history, by far.

JJ Watt revealed in a social media post earlier this season that he underwent treatment for atrial fibrillation – an irregular heartbeat described by many sufferers as a “quiver,” “flutter,” or “flip-flop” of the heart.

He played in the Cardinals’ game at Carolina a few days later, and was emotional in talking about his condition after the game. His infant son had yet to be born, and that along with his heart problem gave him pause, as Watt admitted it was the first time he’d ever been scared by an injury to his body.

Atrial fibrillation is defined as “an irregular and often very rapid heart rhythm (arrhythmia) that can lead to blood clots in the heart” that increases the risk of stroke, heart failure and other heart-related complications.

The most recent episode of “Hard Knocks,” the reality TV series on HBO, spent a lot of time on Watt, giving off a vibe that Watt could be headed toward retirement.

A 5-time Pro Bowl selection, Watt was the Walter Payton Man of the Year in 2017. He has also been a first-team All-Pro selection five times.

Watt played a season high 77 snaps, or 95% of the Cardinals’ defensive plays, in the team’s loss to the Buccaneers.

It can be argued that he is deserving of one more Pro Bowl, based on his numbers and what he has meant to the struggling Cardinals.

His 14 tackles for loss and 21 quarterbacks hits lead the Cardinals this season, even though he missed Week 1 due to a calf injury.