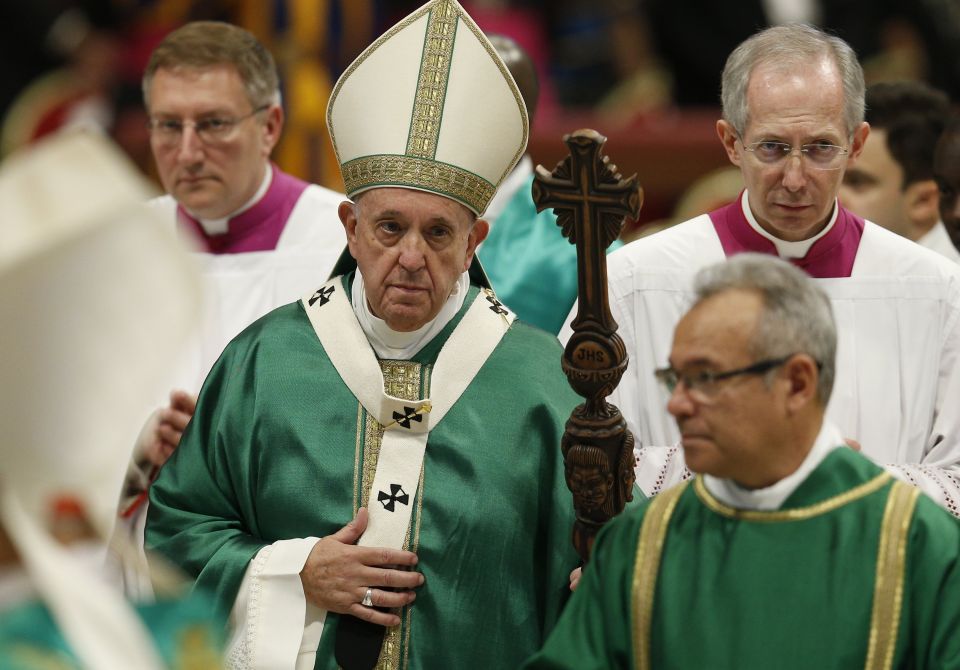 Pope Francis will meet the College of Cardinals on Monday for a two-day discussion about the document that serves as the Vatican’s constitution. Called “Praedicate Evangelium”, the new constitution is aimed at placing the powerful Roman Curia in greater service of local churches,reports dpa news agency. It is one of the pope’s key reform projects, and aims to promote a more effective spread of the faith and encourage a more constructive dialogue, Francis wrote in the document’s preface.

As part of the reform, the Pope has reorganised the authorities of the Holy See and made it possible for women to head these so-called dicasteries. The Pope and around 200 cardinals will be on hand for two days of meetings behind closed doors. The only public appointment is a closing Mass on Tuesday with the 20 cardinals who were newly appointed on August 27.

Hyderabad: Archbishop of Hyderabad Poola Anthony became the first Telugu person to be installed as a cardinal in the Vatican. The ceremony took place at St Peter’s Basilica on Saturday in Vatican City and it was presided by Pope Francis. It was a historic moment for Hyderabad, both Telugu states and India at large that the Archbishop of Hyderabad is one of the College of Cardinals of the Roman Pontiff to guide him in various matters, a press release from the Archdiocese of Hyderabad said on Saturday.

“This is truly a proud moment for all of us. A delegation from Hyderabad consisting of bishops, priests, relatives of the Archbishop and faithful went to Rome to witness this celebration,” it said. Sixty-year-old Anthony, a native of Kurnool district of Andhra Pradesh, in May was elevated as one of the Cardinals by Pope Francis. He was ordained as priest in February 1992 and appointed as Bishop of Kurnool in February 2008. He was appointed as Archbishop of Hyderabad in November 2020. The other Cardinal from India is Archbishop of Goa and Daman Filipe Neri Antonio Sebastao di Rosario Ferrao.

Pope Francis says he is willing to visit North Korea, should the country’s leaders ever invite him, he told a South Korean broadcaster in an interview released on Friday. “I will go there as soon as they invite me. I’m saying they should invite me. I will not refuse. The purpose of my visit is always brotherly love,” dpa news agency quoted Francis as saying to KBS

North Korea allow only a few visitors to enter the country while citizens of the reclusive nation are generally not permitted to leave. The country has been locked down even tighter than usual since the coronavirus pandemic began. Pope Francis told KBS that he has noted how the two countries have survived war. Technically, the war that divided the peninsula into North and South Korea has never ended. “You have suffered through the pains of war. So you know what war means. Work toward peace. I send my blessing and prayer for peace to everyone in both Koreas.” No pope has ever visited North Korea, though the late Pope John Paul II was once invited.

Pope Francis on Sunday expressed solidarity with the people of Sri Lanka who “continue to suffer from political and economic instability” and appealed for peace in the country. “Together with the bishops of the country, I renew my appeal for peace, I implore those in authority not to ignore the cry of the poor and the needs of the people,” the pontiff said in his Angelus message, speaking from his balcony in St. Peter’s Square. Frustration with the economic crisis boiled over on Saturday in Sri Lanka, when a huge crowd of protesters surged passed armed guards into the presidential palace and took it over. Protesters stormed the building and forced the president to agree to resign.

New Delhi: Tesla and SpaceX CEO Elon Musk on Saturday broke his 10-day long Twitter silence, admitting that he was feeling a bit bored. Musk took his longest-ever ‘digital detox’ from Twitter in nearly five years, leaving his more than 100 million followers and the media speculating. He last tweeted on June 22, before switching off from the micro-blogging platform which he uses to break news and fix people.

“Feeling a perhaps a a little bored?” Tweeted Musk. A follower immediately replied: ‘Daddy’s home!’ “Where you been? It’s been boring lol,” tweeted another. Musk then posted his photo along with His Holiness Pope Francis in the Vatican, where his grown-up kids are probably also seen.

“Honoured to meet @Pontifex yesterday,” Musk said. His 10-day long silence comes in the middle of the controversial $44 billion deal to buy Twitter that he has put on hold till CEO Parag Agrawal informs him the exact number of bots and spam accounts on the platform. Musk, a serial Tweeter, last posted on June 22 on the battle between SpaceX and the US Federal Communications Commission (FCC) over broadband usage. His absence came amid the controversial ruling in the US over abortion rights, and his followers had expected him to react strongly to that.

Chief Minister Naveen Patnaik met His Holiness Pope Francis in Vatican city. He expressed his pleasure meeting His Holiness and thanked him for his warm audience. He wished His Holiness good health and a long life. On behalf of Odisha and her people CM presented His Holiness a Pattachitra Painting which depicts the Tree of Life. Pattachitra is a unique ancient traditional, cloth based scroll painting from Odisha. This art form is known for its intricate detail, natural colors and mythological themes. It shows the unique expertise of the skilled crafts persons of Odisha Many priests and sisters from India, who were at the Vatican, were happy to see Chief Minister Sri Patnaik, they wished him well.

Archbishop of Hyderabad Anthony Poola, who has been named by Pope Francis as one among the new Cardinals of the Catholic Church, is not only the first Telugu person but also a first Dalit to be elevated to the rank. Anthony Poola’s appointment as Cardinal marks the entry of a Dalit Christian into the College of Cardinals, which elect the Pope.

Anthony Poola, 62, hails from Kurnool district of Andhra Pradesh. He led the diocese of Kurnool for over 12 years before being appointed as Archbishop of Hyderabad in 2020 by Pope Francis. Pope Francis on Sunday announced that he would be elevating 21 churchmen, including two from India, to the rank of Cardinal. Archbishop of Goa and Daman Filipe Neri Antonio Sebastiao di Rosario Ferrao is the other priest from India to be elevated as Cardinal.

Reacting to the appointment, Anthony called it ‘God’s will which he is accepting with humility’. He thanked Pope Francis for his trust. He said his appointment as a cardinal is a privilege for the Telugu region and will grow the faith of the Church in Andhra Pradesh and Telangana. Various organisations, including Telugu Catholic Bishops’ Council were elated over Anthony Poola’s elevation. He is the first Telugu in the history of the Catholic Church to be appointed as Cardinal, considered as the second biggest title after the Pope.

Dalit groups activists have hailed the appointment of a Dalit as the Cardinal. They consider it as an honour and recognition for the oppressed sections of the society. The development is seen as a big boost for Dalits, who constitute over 60 per cent of the faithful of the Catholic Church in India. With the addition of Anthony Poola and Filipe Neri AntAnio, the number of Cardinals from India has increased to six. The new Cardinals will formally assure the responsibility on August 27 when the Pope would conduct the consistory or the ceremony to elevate churchmen to cardinal’s rank. The College of Cardinals comprises 229 cardinals who are personally selected by the Pope. They elect the new Pope, serve as advisors to him and also act as papal envoys. Born in Chindukur in Kurnool district of Andhra Pradesh, Anthony Poola joined minor seminary in Kurnool and studied at St. Peter’s pontifical major seminary in Bengaluru. He was ordained as a priest on February 20, 1992, at Kadapa. After serving in the diocese of Kadapa for over 16 years, he was appointed Bishop of Kurnool in 2008. In November 2020, Pope Francis appointed Anthony as Archbishop to the metropolitan archdiocese of Hyderabad, which is spread over Hyderabad, Rangareddy, Medchal and surrounding districts of Hyderabad. In January last year, he took over as Archbishop of Hyderabad, thus becoming the spiritual head of lakhs of Catholics. Anthony also served Chairman for Scheduled Castes/Backward Classes Commission (2008-2015), chairman of youth Commission Telugu region (2008-2015), chairman AP Social Service Society (2008-2020) and secretary general and treasurer of Telugu Catholic Bishops Council (2014-2020)