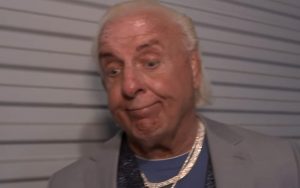 Like many WWE stars in recent months Ric Flair was not happy where his character was heading creatively. He had been in a few recent storylines with his daughter Charlott Flair, during her feud with Lacy Evans which was scrapped after Evens revealed that she was legit pregnant.

Earlier today after his release was announced we the first reaction from the man himself , Flair tweeted a pic of a boat that had his famous “woooo” tagged on the side with the caption ,

Flair has not made any statements on his plans for the future or if he plans to continue the business.