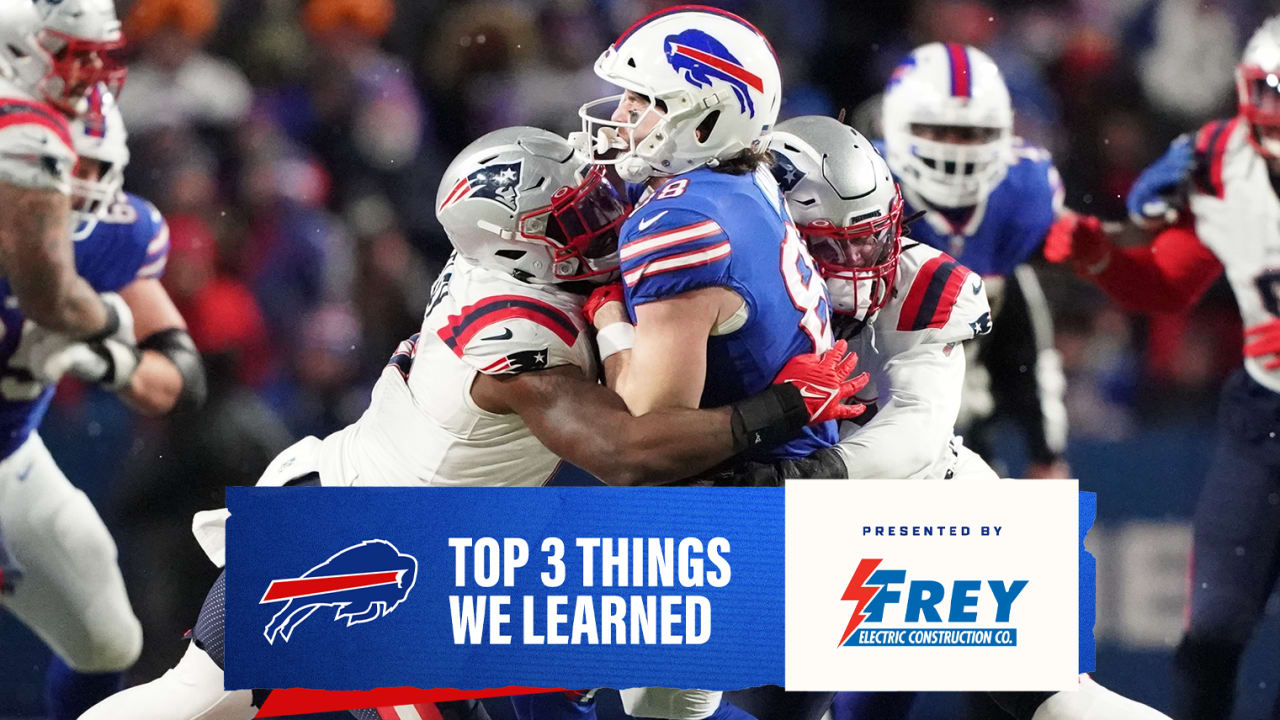 We can’t even begin to talk about this game without addressing THE WIND. The Patriots and Bills met the familiar, unrelenting winter weather Monday night when they arrived at Highmark Stadium and were forced to endure a cold, gusty environment. The Wind was a legitimate factor in the game from the very start, knocking down two Jake Bailey punts, redirecting Josh Allen’s passes and sending a key Tyler Bass field goal attempt wide right. Buffalo refused to change who it was despite the conditions, attempting 30 passes, while New England accepted reality and adjusted accordingly. A game that could have produced a healthy amount of points instead became a grind-it-out affair reminiscent of a style of play that was popular in the sport’s earliest days. One team — the Patriots — was built better for the conditions than the other, and that squad emerged triumphant.

Traditionalists are toasting Bill Belichick and Josh McDaniels tonight. The head coach and coordinator embraced the conditions and responded by pounding the run all night, asking rookie quarterback Mac Jones to throw the ball just once in the first half and three times in four quarters for a total of two completions and 19 yards. Damien Harris and Rhamondre Stevenson rose to the challenge, combining to rush 34 times for 189 yards and a touchdown via a 64-yard Harris scamper on a perfectly blocked toss sweep to the left. Even in long down-and-distance situations, McDaniels did not relent, and one play perfectly captured the state of affairs for the Patriots when McDaniels called a QB sneak on third-and-5, picking up four yards to set up Jones for another sneak on fourth-and-1, which he barely converted. New England committed to the run from the outset and wore down Buffalo’s defense with a 14-play, 59-yard drive that ended in a 34-yard Nick Folk field goal and sucked the life out of Buffalo’s defense. It takes a certain amount of unusual stubbornness to call a game like the Patriots did, and that stubbornness earned them a crucial victory.

Buffalo needs more than Josh Allen to reach its expectations for this season. The Bills have proven to be an explosive offense with the combination of Allen and offensive coordinator Brian Daboll in the last two seasons, but on Monday night, they needed more from their running game to be diverse enough to move the ball effectively. They got 60 yards on 19 carries between Devin Singletary, Zack Moss and Matt Breida, which simply wasn’t enough. What’s most frustrating for Bills fans is how Daboll handled their red-zone opportunities in the fourth quarter, situations in which Daboll reverted to leaning on the arm and legs of Allen, who was forced to try to make a play out of structure and either failed with ball placement (missing Stefon Diggs on a back-shoulder throw in the front corner of the end zone, for example), or watched his teammates fail by dropping catchable passes (Dawson Knox had a rough night when it came to both catching the ball and making mental mistakes). In a perfect world, Daboll calls a few more runs to inch closer to the goal line, but it’s not like the Bills were ripping up chunks of yards on the ground. Still, the coordinator relied too much on Allen in key situations – something that isn’t just exclusive to Monday night — and paid for it by only putting 10 points on the board.

The Bills have a new, but familiar mental hurdle to clear. A year after the Bills watched Goliath shrink to a commoner and fade away in their rearview mirror, the big, bad Patriots are right back where they’ve existed for most of the last two decades: in front of Buffalo in the AFC East standings. Buffalo had a great opportunity to pull even with the Patriots in the division standings and simply didn’t capitalize Monday night. Perhaps more destructive to the Bills’ psyche is how the Patriots did it: by beating them with toughness and strength at the point of attack. It’s extremely rare to watch a team throw the ball three total times and win a game, yet that’s exactly what New England did in this win. Safeties Micah Hyde and Jordan Poyer were clearly frustrated after the game and were easily irritated by the way a reporter framed a question about their inability to keep the Patriots from rushing for 222 yards as a team, indicating just how demoralizing such a defeat can be. The Bills will need to bounce back in a big way and steel themselves for their rematch with the Patriots, which is just three weeks away.

The Patriots have returned to the throne of the AFC. New England has won seven straight games and is the No. 1 seed in the conference, marking Belichick’s 11th career seven-game winning streak as a head coach. It’s impossible to not draw similarities between this Patriots squad and those of the early 2000s, when Belichick was taking his first steps toward building a dynasty that largely dominated the NFL for nearly two decades. I hope everyone enjoyed that one-year lull for the Patriots, because they’re certainly not going away anytime soon. It will be up to the rest of the conference to dethrone them, much like it has been since we turned the calendar to 2001.

Next Gen stat of the game: The Patriots gained 141 yards and scored one rushing touchdown on 26 attempts against a stacked box, averaging 5.4 yards per carry on such attempts.