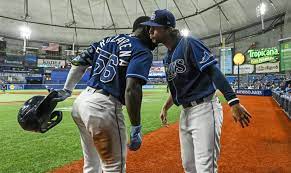 Means (4-3), making his first start since June 5, allowed five runs and seven hits in five innings, striking out two in a 78-pitch outing.

“Physically I felt good,” Means said. “I was just throwing too many strikes, too many pitches over the plate. I thought I was attacking and so were they. I had too many fat pitches.”

“I just thought he was rusty early,” Orioles manager Brandon Hyde said. “I thought he got better as the game went on. Got him through five, probably could have kept going. He feels good and that’s the positive.”

Mejía also had a three-run triple during a four-run eighth off Shaun Anderson that made it 9-3.

“I think this is the best game I’ve ever had in the big leagues, and it feels really good,” Mejía said through a translator.

Tampa Bay won for the ninth time in 12 games and moved within a game of AL East-leading Boston.

Baltimore (31-63) had its three-game winning streak halted. The Orioles failed for the fifth time to extend a season-high winning streak to four games.

Tampa Bay took a 5-1 lead on Mejía’s two-run shot in the fourth.

Arozarena hit his first homer in 22 games, a solo shot in the third inning. He hit a leadoff double during a two-run first and scored on Vidal Bruján’s single.

The speedy Bruján later failed to tag up at second on Austin Meadows’ deep fly to center, but advanced to third when center fielder Cedric Mullins made an errant throw back to the infield. He broke toward the plate at first on Wander Franco’s fly to right, but was able to tag up and score.

Austin Hays reached leading off the eighth on a throwing error by Franco at third base, and scored when Ryan Mountcastle was credited with a sacrifice fly after right fielder Brandon Lowe dropped his fly. Mountcastle scored when Anthony Santander doubled off J.P. Feyereisen, cutting the Orioles’ deficit to 5-3.

Pete Fairbanks ended the eighth with a pair of strikeouts with two on.

He picked us up,” Rays manager Kevin Cash said.

The Tampa Bay bullpen had a home scoreless streak end at 27 1/3 innings.

Baltimore went 1 for 11 with runners in scoring position.

Pedro Severino got Baltimore within 2-1 on an RBI single in the second off Shane McClanahan (4-3), who gave up one run and four hits over five innings.

Orioles: 3B Maikel Franco (right ankle) went 0 for 1 with a sacrifice fly and walk with the FCL Orioles Orange. … INF Freddy Galvis (right quadriceps) will start game action at the team’s Florida complex next week.