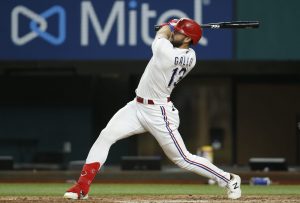 Kyle Gibson and Ian Kennedy are two players the Texas Rangers should definitely move at this year’s trade deadline. But Joey Gallo? Well, depends who you ask.

Gallo’s name has been hot on the rumor mill for some time now, with the Padres, Yankees and more recently, the Blue Jays, in on the right fielder. The front office knows they have these options on the table.

But they also have the option of extending him, to which recent reports have suggested extension talks have stalled for now.

It’s a unique position to be in, and one that doesn’t have a lot of precedent (however, Byron Buxton of the Twins just rejected an extension offer). Luckily, the Texas Rangers are led by smart people including Chris Young, who understand the risks and rewards of these types of high profile moves.

At the end of the day, Joey Gallo will either be extended long term or traded for a prospect haul too good to resist. And either scenario would represent a massive win for this organization. I’m also just trying to prepare you for whatever happens.

Ending their much-maligned 12 game losing streak to begin the second half on Tuesday night with a 5-4 win over the Arizona Diamondbacks, Gallo’s postgame interview with reporter Emily Jones McCoy sure seemed to indicate something could be on the horizon

No one knows what the Texas Rangers will do with Joey Gallo, but they can’t lose either way

These comments could be pure fodder, but they could also be subtle hints of what’s to come for Joey Gallo and the Texas Rangers.

Trading Gallo certainly has its pros and cons. On the positive side, Texas would boost its rebuild in a big way by acquiring impact young talent as they look to make 2023 a reality. Well, what’s better than trading your best position player to advance that cause? Don’t we want to win faster?

Not to mention, I’m sure Gallo would love to taste what it’s like to win again, as the Rangers haven’t made the playoffs since 2016, his second year in the bigs.

Conversely, trading the 27-year-old would definitely make 2021 less palatable (not that anything was going to change this year though). He’s easily the most popular player on this team right now and a trade wouldn’t sit well with fans, and understandably so.

Gallo is also the undisputed face of the Texas Rangers franchise, with the MLB roster lacking much star power at the moment. He’s expressed his desire outwardly to remain a Ranger, and that’s got to be good for something.

In the end, I don’t believe there’s a right or wrong with the immediate handling of Joey Gallo. The organization either accelerates the rebuild by acquiring more young talent or it retains its star player, allowing him to serve as the lynchpin of a future contender in the making.