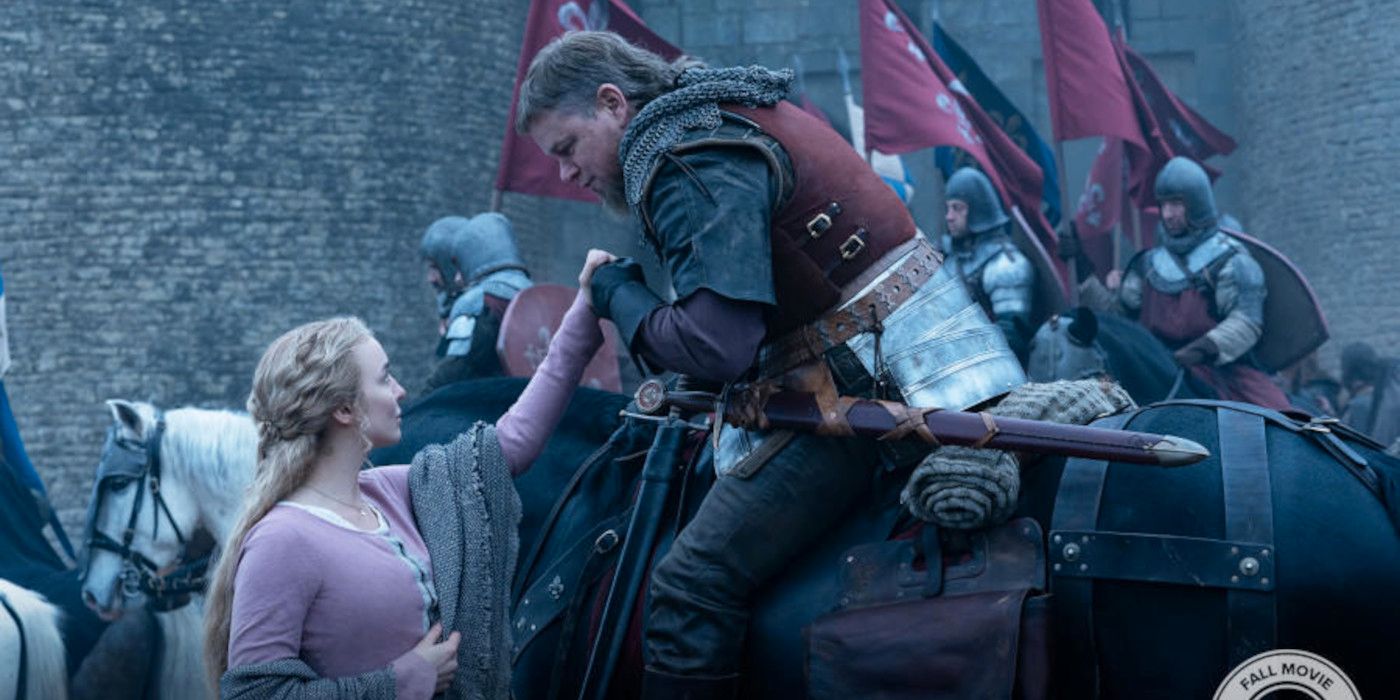 The Last Duel is a sprawling, often ungainly movie — a talky, three-part Rashomon-style drama that mixes past and present-day politics — but there’s a bracing intelligence to its messiness. It opens the way a lot of Ridley Scott period epics do, on a gloomy day with two sides preparing for battle.

We’re in Paris in the year 1386, and the combatants are the dashing squire Jacques Le Gris — that’s Adam Driver — and the sullen knight Sir Jean de Carrouges — that’s Matt Damon. Jean’s wife, Marguerite, played by Jodie Comer, watches anxiously from her seat. Just as the two men are about to clash lances, the movie cuts away and rewinds several years to show what brought these three characters to this moment.

There’s a lot more rewinding to come. The Last Duel is based on a true story that it tells no fewer than three times, each time from a different character’s perspective. The script, adapted from Eric Jager’s nonfiction book, emerged from a unique collaboration among three writers. Damon and Ben Affleck wrote the first two chapters focusing on the men, while Nicole Holofcener wrote the third chapter centering on Marguerite. It’s an ingenious approach to what plays like a medieval #MeToo story, tackling the dynamics of power, class and gender in an era when women were regarded as little more than male property.

The opening chapter focuses on Carrouges, played by Damon with a righteous scowl and a mullet so hideous it almost immediately turns you against him. Carrouges is a brave warrior from a long line of brave warriors, but also a proud, petty man with a chip on his shoulder. We first see him and Le Gris in 1370, fighting valiantly against the English and becoming close friends. But Carrouges begins to feel resentful when their superior — Count Pierre d’Alençon, a saucy libertine played hilariously by Affleck — takes Le Gris under his wing. The count even gives Le Gris a coveted piece of land that was originally intended for Carrouges as part of his wife Marguerite’s dowry, leading to years of legal struggles.

Then one evening, Marguerite comes forward and tells her husband that while he was away, Le Gris came to their castle in Normandy and raped her. Carrouges takes the accusation public, setting in motion a duel between himself and Le Gris, which would become the last trial by combat officially recognized in France.

At this point, the first chapter ends and the movie returns to the beginning, this time replaying events from Le Gris’ perspective. As one of the count’s closest allies, Le Gris has come to enjoy a life of privilege and debauchery, and Driver basically plays him as God’s gift to women. That stokes his tensions with Carrouges, who eventually is made a knight and demands that Le Gris show him respect.

Around this time, Le Gris falls madly in love with Marguerite and becomes certain that she reciprocates his feelings. That brings us to their fateful encounter, in which Le Gris convinces himself that Marguerite’s protests are merely the signs of a guilty conscience. But even though the movie is showing us his version of events, it rejects his delusion completely: What we see is unmistakably a sexual assault, in which Marguerite repeatedly says no and tries to push him away.

The third chapter, which unfolds from Marguerite’s perspective, revisits the rape scene, and for some viewers — fair warning — it may seem like one grueling replay too many, especially since Marguerite’s trauma is now even more apparent. But this is also the chapter in which the moral arc of the story snaps into focus. After so much boorish male behavior, fully embodied by Damon and Driver, the fierce intelligence and humanity of Comer’s performance is like a balm. Marguerite emerges as by far the most honest and clear-eyed of the movie’s three leads, heroic in her refusal to stay silent about what she endured.

Near the end of the film, Marguerite finds herself on trial, forced to defend her rape allegation in a court full of men trying to discredit her. The sequence plays like dark satire, suggesting how much has changed and also how much hasn’t. And then there’s the duel, which feels almost subversively anticlimactic: It delivers all the gory virtuosity you’d expect from Ridley Scott, but something about it rings deliberately hollow. It hardly matters which man wins, the movie seems to be saying, in a world where women are destined to lose.