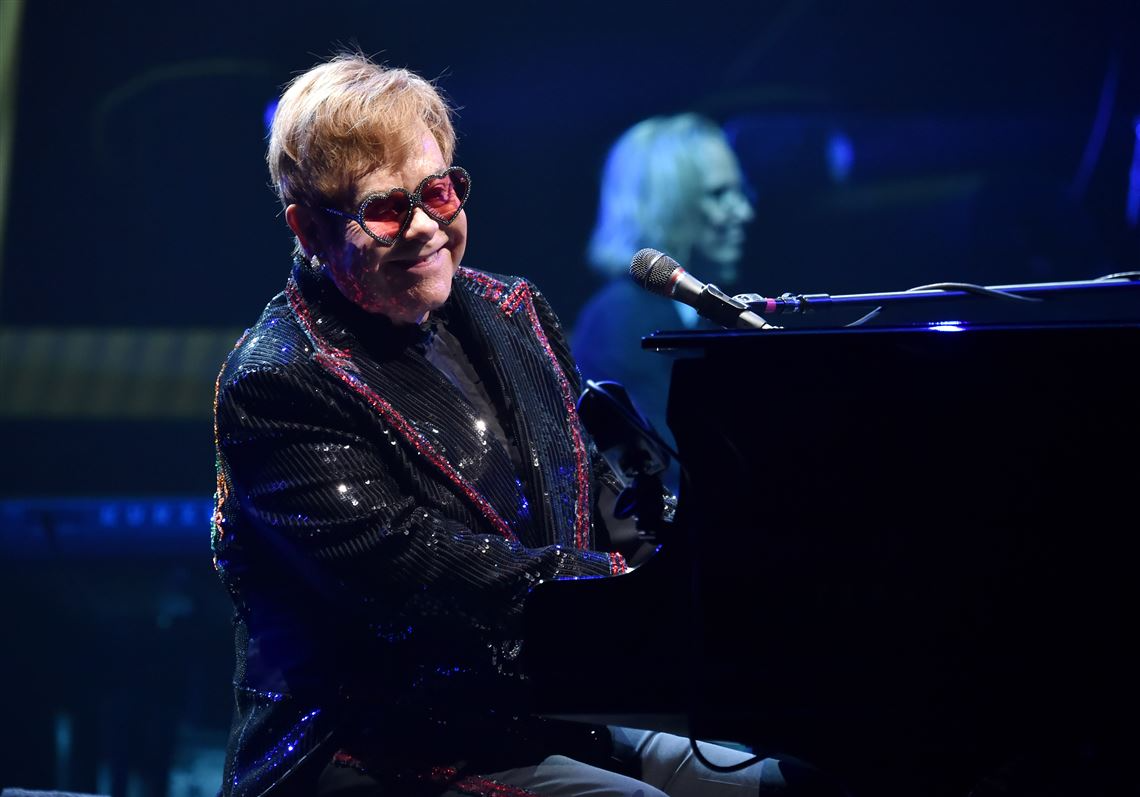 Parting is such sweet sorrow.

Unless the guy you’re parting with never really seems to go away.

We probably shouldn’t pick on Sir Elton John too much — he’s hardly the only rock ‘n’ roll musician to ever stage more than one farewell tour — but for this weekend, we’re going to hedge our bets a bit and not refer to his PNC Park show as his “final” show in Pittsburgh.

We’ll go from something-resembling-farewell on Friday to a first on Sunday, as in the first Stillers home game of the season — and there’s plenty in between. Let’s get started.

We’re fortunate to have Scott Mervis in staff for many reasons, not the least of which is that he knows that Elton John has played Pittsburgh *checks notes* 3,259 times, at least half of which have been classified by Sir Elton as farewell shows*. The first goodbye? A Civic Arena show in 1984. And Saturday’s date at PNC Park will be his third local stop on the current Farewell Yellow Brick Road Tour, which, as you may be aware, began in 2018.

But this show — as well as this tour — has a feeling of finality about it, what with the change of venue from PPG Paints Arena to the baseball stadium on the North Shore. And even though we’re having fun poking at Sir Elton about whole farewell thing, the fact is that he’s welcome to play here anytime, and as often as he wants.

And here’s the good news — if you want to say goodbye to the yellow brick road in person, you can. But you’re going to be paying more — as in, much more — than did any of the 14,000 people who saw him in his first Pittsburgh appearance, in 1974 in the arena. Tickets and more info are here.

What month is it?

Try to follow along here, people — it’s mid-September. Which is the perfect time for Oktoberfest.

And a little German-style beer. Ahem.

The official party in Munich begins on Saturday, so we think this weekend is the perfect time for your Oktoberfest observation as well. And while there are plenty of options at breweries in and around Allegheny County — you’ll find a comprehensive list here — we feel it’s important to point out that Pittsburgh’s OG Oktoberfest is at Penn Brewery, in Pittsburgh’s original German neighborhoods. The breweries that occupied Penn’s current space were perfectly suited to make German-style lagers — in fact, brewers took advantage of caves in the side of Troy Hill to keep their fermenting lagers cool.

Those German styles are still brewed there, as is the German food you’d expect as well. The details about Penn’s fest are here.

Only the finest cinematographic masterpieces will do for the silver screen of Downtown’s Harris Theater.

Which is why it is the natural setting for Saturday’s Three Stooges Festival.

Those attending will be treated to six classic Stooges shorts on the big screen, where they were first, uh, unleashed on an unsuspecting public. In between the shorts, there will be trivia contests — with prizes! — and an audience poll to determine the age-old riddle: Who’s stronger, Curly or Shemp?

One final-but-crucial detail: Everyone who attends gets a free kazoo. And our friends at the Cultural Trust say you’ll be expected to use them. Tickets and more details are here.

OK, look — this is not a reminder about the home opening game for yer Stillers on Sunday. This is about the first real chance for Stillers fans to tailgate for a home game in 2022 (Pitt fans have already had two chances this season, and as you can see, they did it up right for the Backyard Brawl).

What’s the difference, you ask? Friend, if you’re tailgating with the right people, the tailgate is as important as the game itself. The right mix of food, company, tradition and — if it’s your thing — an adult beverage or two sets the table for the entire day, and gets you ready to be the best fan you can be.

We can’t do all of that for you — truly good tailgates happen organically — but we can get you started toward success in one of the most important categories: the food. You can’t go wrong with the basics: Burgers, dogs and brats (or any other sausage-y tubed meat product) are easy to prepare, easy to top and easy to handle when you’re eating while standing on asphalt. Also: They’re just as easy to dress up beyond the typical preparation.

And if you want to take an extra step or two? How does sweet and spicy cola wings sound? Or Buffalo chicken empanadas and taco salad? And this one, which is just plain fun to type: Grilled ham balls.

We’re always happy to see the return of football season. Because that means tailgating season is back as well.

AYE, the Highland Games return to Ligonier on Saturday.
The Pittsburgh International Jazz Festival brings the music to the August Wilson Center and to Highmark Stadium.
The Washington and Greene Counties Covered Bridge Festival has you covered at 10 locations Saturday and Sunday.
The Point Breeze Yard Sale is 9 a.m. to 5 p.m. Saturday. Note: They’re not selling actual yards, just the stuff they put out in their yards.
There is, of course, more stuff, some of which is right here in handy list form.
The weekend is here, boys and girls. Get out there and make it a great one.