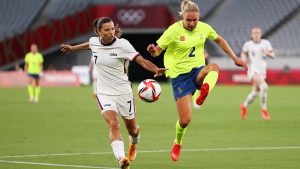 The United States women’s national team fell 3-0 to Sweden in their opening group stage match. It was a dominant performance from Sweden who out played the USWNT across the pitch. As Megan Rapinoe put, “We got bopped.” Stina Blackstenius scored twice and Lina Hurtig added a third for Sweden. The USWNT offered little in response, with Christen Press’s 71st minute miss comprising their best chance. The blowout was the first 3-0 loss handed to the team since their 2017 loss to France during the SheBelieves Cup.

Sweden began their dominant play early in the first half, establishing pressure, disrupting the USWNT, eliminating passing lanes, controlling possession, and that was just in the first twenty minutes of the match. They got their breakthrough in the 24th minute of the match as Eva Jakobsson delivered a cross into the box that Blackstenius put away on a glancing header from a near post run.

The USWNT managed to get out of the first half down only one goal, despite being out shot eleven to three, and conceding seven corners. Head coach Vlatko Andonovski made adjustments in the second half and subbed on Carli Lloyd and Julie Ertz for Alex Morgan and Sam Mewis. The impact from Ertz was immediate (make sure you check out all the USWNT player ratings), as the midfielder immediately began making plays in midfield, winning the ball back and closing down passing lanes in her first appearance since she picked up an MCL sprain in May.

As the team appeared to finally make a small adjustment and connect a few passes while disrupting Sweden’s midfield, the momentum was short lived as Blackstenius scored the go-ahead goal in the 54th minute.

The USWNT missed a golden chance to get back in the match as Christen Press hit the post and then minutes later Sweden scored their third to put the match away.

Throughout the match, the USWNT struggled to ever truly play their way into the game, looking stunned at times, reintroducing old feelings about their 2016 Rio elimination and brining up new questions about the team and their ability to navigate their way through the rest of the group. The loss ends a 44 game unbeaten streak for USA, and the team will try to bounce back from the loss against New Zealand on July 24.

Craving more fallout from the United States women’s national team’s stunning loss to Sweden to open the 2020 Summer Olympic Games? Sandra Herrera and Lisa Roman have you covered with their emergency podcast recapping what went wrong for Vlatko Andonovski’s side. Listen below and follow/subscribe to the podcast: