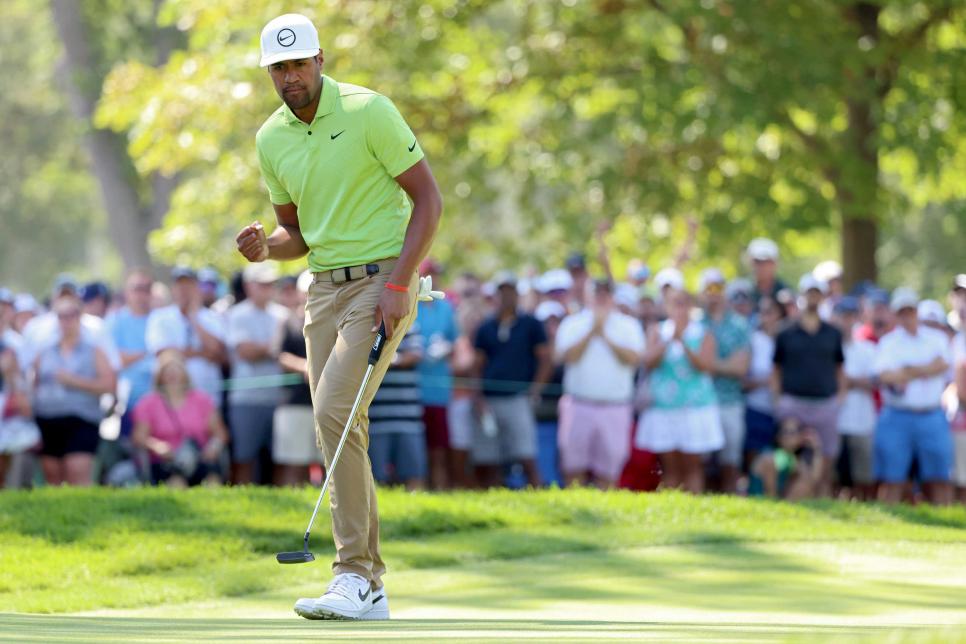 Tony Finau has changed the conversation about him in less than a calendar year.

Finau ran away with the Rocket Mortgage Classic on Sunday at Detroit Golf Club to become the first player in three years to win consecutive PGA Tour events in the regular season. He closed with a 5-under 67 for a five-shot victory and a tournament-record 26-under 262 total.

It was his fourth career victory, and third title in 11-plus months. Finau began his stretch of success last August at The Northern Trust, where he had his first victory in five years and 142 PGA Tour starts.

Finau ended a drought in Detroit, winning for the first time in six attempts when he had or shared the 54-hole lead in a PGA Tour event.

Finau hit 66 of 7″I’m proud of the way I’ve fought through adversity in my career,” said Finau, a Salt Lake City native with Tongan-Samoan heritage. “They say a winner is just a loser who kept trying, and that’s me.”2 greens in regulation, trailing the accuracy of just two players since 1980 in a PGA Tour 72-hole event. Peter Jacobsen hit 69 greens in regulation at Pebble Beach in 1995 and a year later, Willie Wood hit 67 at the Sanderson Farms Championship.

With Finaul’s sixth birdie at No. 17 and a closing par, he broke Nate Lashley’s tournament record of 25 under set in 2019 during the inaugural PGA Tour event.

The PGA Tour will close the regular season at the Wyndham Championship, with the North Carolina event opening Thursday. Players on the bubble will have one last shot to finish in the top 125 of the FedEx Cup standings to earn a spot in the playoffs and a full card next season.

Finau and Pendrith started Sunday tied after a third round that seemed like match play, and a potential Detroit duel turned into a dud.

Pendrith had his first lackluster round of the tournament after he shared the first-round lead with Finau, led him by one shot after the second and matched his 21-under total through three rounds.

The 31-year-old PGA Tour rookie from Canada hit an errant tee shot on the second hole to the right in the rough behind tree branches – after being distracted by a fan running across the fairway – and pulled a 9-foot putt on the hole to lose the lead for good.

Cantlay, No. 4 in the world ranking, had his third straight round in the mid-60s after opening with a 70. Young bounced back from a first-round 71 to finish second for the fifth time.

“I’d be lying if I said it was easy to just watch other people win,” Young said. “Obviously, today Tony beat us all by a lot.”

Pendrith struggled in the final round just as he did the only other time he had a 54-hole lead. He led the Bermuda Championship last October by three shots before a 76 dropped him into fifth place, which was his best finish before his showing in the Motor City.

“It stings a little bit,” said Pendrith, who played in his third tournament after missing nearly four months with a broken rib.

Finau began to pull away from Pendrith with an 11-foot birdie putt at No. 4 and a tap-in for birdie at No. 7.

“When that lipped in, that gave me some momentum and then I was in control of the golf tournament,” Finau said.

Finau was the 3M Open winner last week in Minnesota, where he rallied from five strokes back to win by three. Brendon Todd was the last PGA Tour player to win two straight in the regular season, pulling off the feat in 2019.

“A week can change your life,” Finau said. “When you look at mine, two weeks have changed my life.”