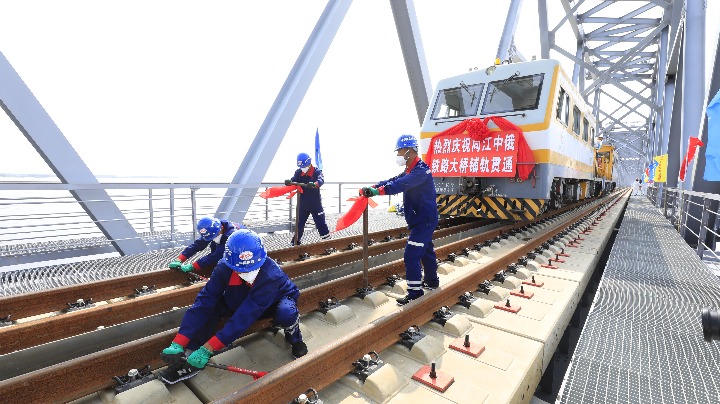 The bridge across the Heilong River, known as the Amur River in Russia, will connect the city of Tongjiang in Heilongjiang with Nizhneleninskoye in Russia.

The main bridge spans 2,215 meters, with 1,886 meters of that in China. Construction of the bridge, which has a designed annual throughput capacity of 21 million metric tons, began in February 2014.

During its construction, builders dealt with many difficulties, such as the bitter winter cold.

“The lowest temperature can drop to-40 C with strong wind over the frozen Heilong River,” said Li Huachao, chief engineer of the Tongjiang railway bridge project for China Railway Major Bridge Engineering Group. “However, the concrete doesn’t work at-5 C.

“To finish the project on time, we built a 10,000-square-meter greenhouse and installed boilers in it to keep the temperature around 15 C.The boilers also provided the warm water needed to mix concrete inside the greenhouse.

“Although it was only several kilometers from the greenhouse to the farthest construction site of the bridge, we wrapped the tanks with thick quilts during transportation of the concrete to maintain the temperature.”

In March 2019, the main body of the bridge was connected from both sides in China and Russia, and the track-laying started soon after.

Different gauge standards became another challenge, with engineers from both countries choosing a design with two sets of rails, allowing Chinese standard-gauge (1,435 millimeter) and Russian broad-gauge (1,520 mm) trains to cross one at a time.

“During the construction, we experienced great temperature differences in different seasons and at different times of the day, which may cause the rail lines to expand or contract,” engineer Wu Chao said. “To keep the gap between two rails within 5 mm, we set up a monitoring system to record the accurate position of each rail.”

After the bridge opens, the distance by rail from Heilongjiang to Moscow via Tongjiang will be shortened by 809 kilometers and at least 10 hours will be saved for a one-way trip, China Railway Harbin Group said.

It will also help alleviate pressure on Manzhouli and Suifenhe, two major land ports on the China-Russia border, it said.