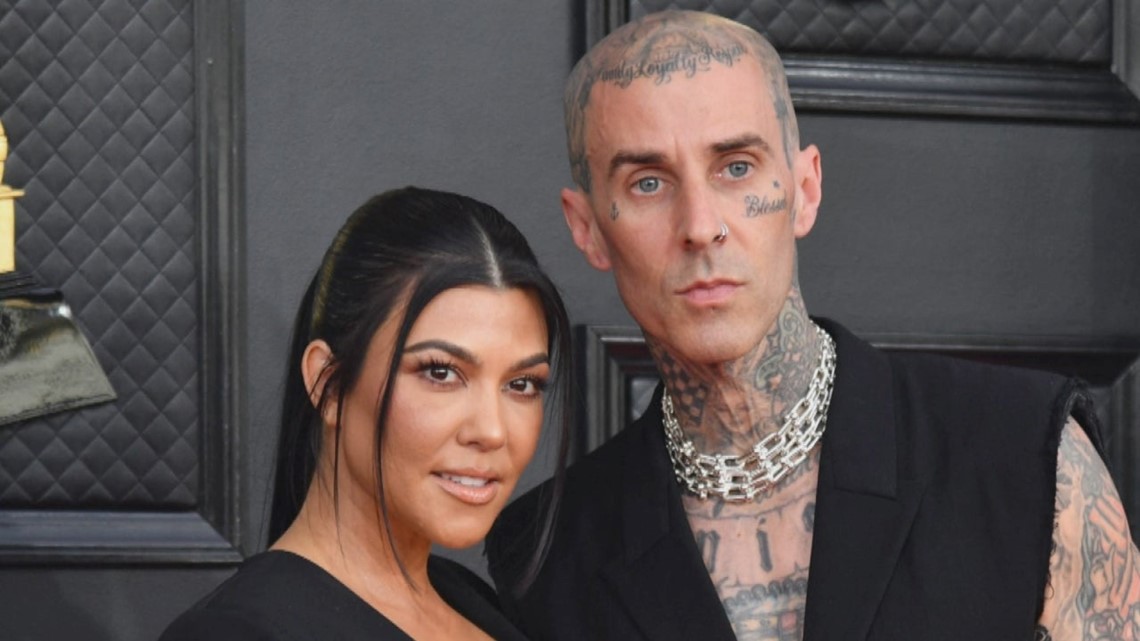 Travis Barker and Kourtney Kardashian are sharing a glimpse into the life they are building together in his home.

The Blink-182 drummer, 46, gave Architectural Digest a tour of his house in Calabasas, Calif. where he lives with his three children: stepdaughter Atiana, 23, son Landon, 18, and daughter Alabama, 16–whom he shares with ex-wife Shanna Moakler.

On Thursday, the publication uploaded a 15-minute video to YouTube of Barker explaining his fondness for minimalistic and modern styles.

Kardashian, 43, also made an appearance during the home tour. When Barker walked over to his kitchen, he said, “So this is my kitchen…and this is my fiancé” and the two shared a brief kiss.

Barker and Kardashian revealed that they tied the knot last weekend, so it appears the video was filmed before they were legally married.

In the video, he asked the “Kardashians” star what she was doing as she was seated on the countertop, typing away on her computer.

“Drinking the matcha that you made me, your famous matcha,” she replied while he rubbed her leg.

“I actually make the best matcha,” Barker then told the camera. “Way better than any matcha place in LA.”

In an interview also published on Thursday, the musician spoke to Architectural Digest about how his taste has adapted to reflect his current lifestyle.

“I’ve had homes with lots of flashy cars, murals, and bikes hanging from the ceiling,” he shared. “But with three children of my own, plus Kourtney’s kids, this place felt right for this moment in my life. I wanted a house where I can rest and enjoy my family, a place where we can create memories.”

In the home’s formal dining room, Barker walked the camera through where each member of the blended family sits at the table. He also pointed out two modern candlesticks that Kardashian got for him while they were just friends and explained they’d always “spoiled” each other with gifts, even before they were dating.

Later in the interview, Barker explained that Kardashian lives just “a block away” and that he was planning to convert his home studio into a bunk room so her kids are “comfortable” there.

Speaking about what’s next for the newlyweds, Barker added, “In the future, I suppose we’ll wait to find something better than what we have. Wherever we end up, we feel incredibly blessed and grateful.”

Before legally marrying earlier this month, Kardashian and Barker practiced saying “I do” at a Las Vegas chapel where an Elvis Presley impersonator officiated the ceremony.

Then, on May 15, a source close to the musician confirmed to NBC News that they actually tied the knot and became husband and wife.

According to TMZ, the pair exchanged vows on the steps of a courthouse in Santa Barbara, Calif.

There could be a third wedding in the future. People reports that Barker and Kardashian are planning a bigger ceremony in Italy.

On Monday, the duo, who began dating in January 2021 before announcing their engagement in October of last year, posted black-and-white photos on Instagram of them celebrating their nuptials.

“Till death do us part,” they captioned the series of pictures that showed them kissing in a car that had the sign “Just Married” attached to the back of it.

In other snaps, Kardashian, who wore a white minidress with sleeves that connected to her veil, caressed Barker’s face and held his hand as they walked down the courthouse steps.

During the first episode of her Hulu series with her family, Kardashian opened up about her connection with Barker.

“He was one of my closest friends for probably eight years,” she said on “The Kardashians.” “We used to work out together all the time.”

She continued at the time, “We fell in love and now he’s my boyfriend.”