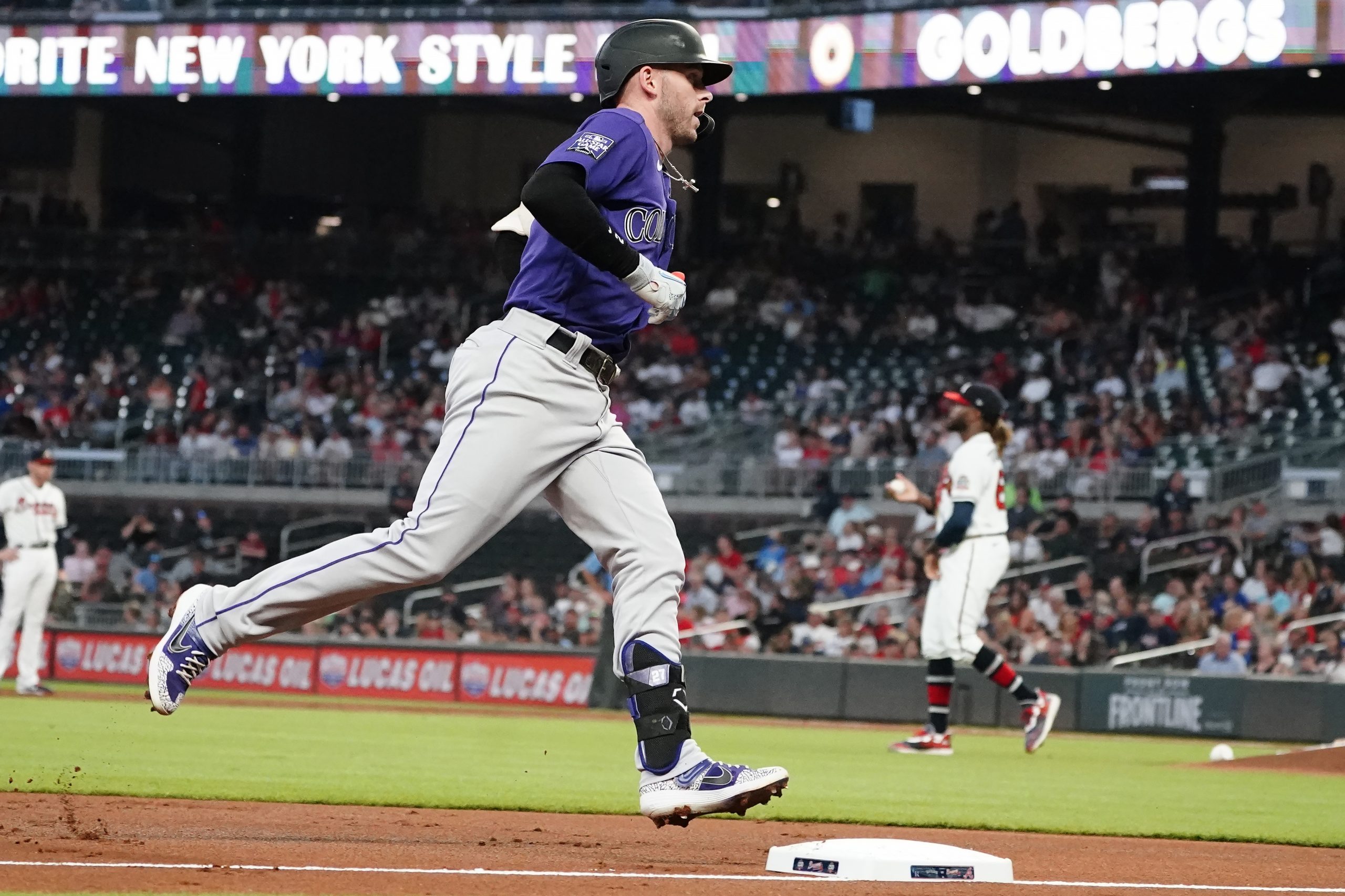 Are the Rockies finally solving their season-long road woes?

Colorado defeated the Atlanta Braves, 5-4, on Tuesday night at Truist Park to improve the team to 4-1 at the halfway point of its current 10-game road trip. Trevor Story and Brendan Rodgers both homered to bolster a resilient Jon Gray start.

The Rockies (67-78) play again on Wednesday in their second of three games in Atlanta. Colorado improved to 22-51 away from Coors Field this year.

The Rockies overcame an early scare on Tuesday. Gray, in his first at-bat, appeared to take a pitch off his right fingertips on a bunt attempt facing Atlanta starter Touki Toussaint. Gray initially winced in pain as athletic trainers examined him for several moments. He returned to the plate and struck out.

Gray — after repeatedly flexing his right hand — stayed in the game to pitch. He didn’t seem fazed.

“A lot of concern,” manager Bud Black said. “A 97-mile-per-hour sinking fastball with movement that hits you on the tip of your index finger of your throwing hand … we got lucky. That could have been a fractured index finger. … But that wasn’t the case. It was sore from the top of the knuckle to the tip of the finger. But the soreness resolved itself relatively quickly.”

Gray fanned seven Braves and threw strikes on 61 of 90 pitches over five innings. He gave up a tying run in the fourth, 2-2, after consecutive doubles from Travis d’Arnaud and Dansby Swanson. But Gray retired the Braves in order to end the fifth and he got plenty of run support.

Story’s recent power surge continued in the second with a home run blasted 430 feet to center. Then Ryan McMahon walked, Elias Diaz singled, and Garrett Hampson gave Colorado a 2-1 lead with an RBI single. Rodgers put Colorado ahead in the fifth, 4-2, with a two-run homer after Raimel Tapia singled. Hampson tripled in the sixth and scored on a Rio Ruiz sacrifice fly.

Atlanta clawed back in the eighth, 5-4, with an Adam Duvall two-run homer off Rockies’ reliever Jhoulys Chacin. But Carlos Estevez earned his eighth save of the season.

Gray got off to a rough start in the first with three allowed hits, including a Freddy Freeman RBI single, for an early 1-0 Braves advantage.

Jim Hilliard, the father of outfielder Sam Hilliard, died Sunday as the result of ALS — also known as Lou Gehrig’s disease — after being diagnosed in 2018. The family announced his passing on Tuesday in a Twitter post (@TeamHilliardALS): Our Jim Hilliard conquered ALS early Sunday, September 12, 2021, and left his broken body behind for glory and eternity with his Heavenly Father. ALS is cruel, but Jim Hilliard faced it with courage, grace, and a faith that was amazing. We will miss him.

Jim’s wife, Tamara, played a key role in the planning for Major League Baseball to recognize June 2 as Lou Gehrig Day to annually promote ALS awareness. Sam Hilliard did not play for the Rockies on Tuesday against the Braves.

“Sam has handled this as well as anybody could handle it,” manager Bud Black said. “There have been some emotional moments with Sam. But he’s kept his chin up and his chest out. He’s represented his family and he’s represented the ALS cause. So many people have been there right along with Sam and his family from our Rockies family to help do everything we can to get on top of this dreaded disease. But Sam has hung in there very admirably.

Senzatela is set to make his 25th start of the season during an impressive stretch of six consecutive quality outings. He is 2-1 over that span with a 2.54 ERA. It represents the longest stretch of quality starts by a Rockies pitcher all season. But Senzatela has struggled in road starts this season at 1-6 with a 4.40 ERA. In his career against Atlanta. four starts and five outings, his ERA is 3.66 with no losses (2-0). Ynoa did not perform well in a start earlier this month (Sept. 3) against the Rockies at Coors Field. He gave up four earned runs on five hits and left in the fifth.

Trending: Trevor Story, entering Tuesday’s game in Atlanta, has been dominant in his career at Truist Park. He’s batted .375 (15-40) with seven doubles and three home runs.