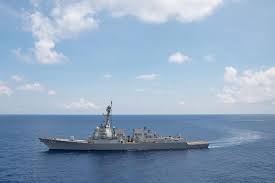 China’s actions in Hong Kong, for instance, reneging on promises of autonomy guaranteed there under agreement in 1997 with the British government, are of concern, Aquilino said.

“Those actions were completely disconnected from the words from Beijing to adhere to the agreement that was in place,” he said. “We see similar actions if you were to look at the border of India — we view that with concern. If you look at the actions associated with the Uyghurs in Xinjiang, and the violations of what we believe — the dignity and respect and human rights — that we view those actions with concern.”

Also of concern for Indo-Pacom are China’s claims on the South China Sea — which Aquilino said interfere with the wellbeing and prosperity of all nations in the region.

“We view with concern [China’s] unlawful claim to the entire South China Sea — directly and negatively impacting all of the countries in the region, from their livelihood, whether it be with fishing or access to natural resources,” Aquilino said. “Those are the things that lead me to believe that our execution of integrated deterrence has to occur now, and with a sense of urgency.”

Ten nations border the South China Sea, and many more nations depend on it for trade with all of those countries, Aquilino said. The prosperity of all depends on continued free access to the waters there.

Roughly a third of liquid natural gas and a quarter of all global trade flows through the South China Sea, Aquilino said. Bordering nations also rely on the sea for resources as well, such as fishing.

“It’s critically important for all nations,” he said. “The unlawful claim to the entire South China Sea threatens all of that. When we talk about the South China Sea, understanding the importance is critical.”

The U.S., in part through Indo-Pacom, works w  Indo-Pacom ith allies and partners in the region to reduce tensions there, he said.

“We spend a lot of time with our allies and partners to ensure that the international rules-based order is maintained and unlawful claims don’t go without challenge,” he said. “But the Chinese just recently unilaterally renamed 80 geographic features in the area, with an inherent claim that goes with. That’s just counter to what all of the nations in the region would expect, believe, and what they need to maintain their prosperity.”

The U.S. has been operating in the Pacific for more than 80 years now, said Aquilino, and will continue to do so, including in order to maintain the agreed-upon international rules-based orders that the U.S. and all pacific nations depend on to ensure prosperity.

“This attempt to restate what a revisionist history view of claims is just counter to everything that those nations with common values believe,” he said. “We will operate here to ensure that freedom of navigation for all is maintained, and that we will preserve the stability and peace in the [region’s] shared prosperity.”