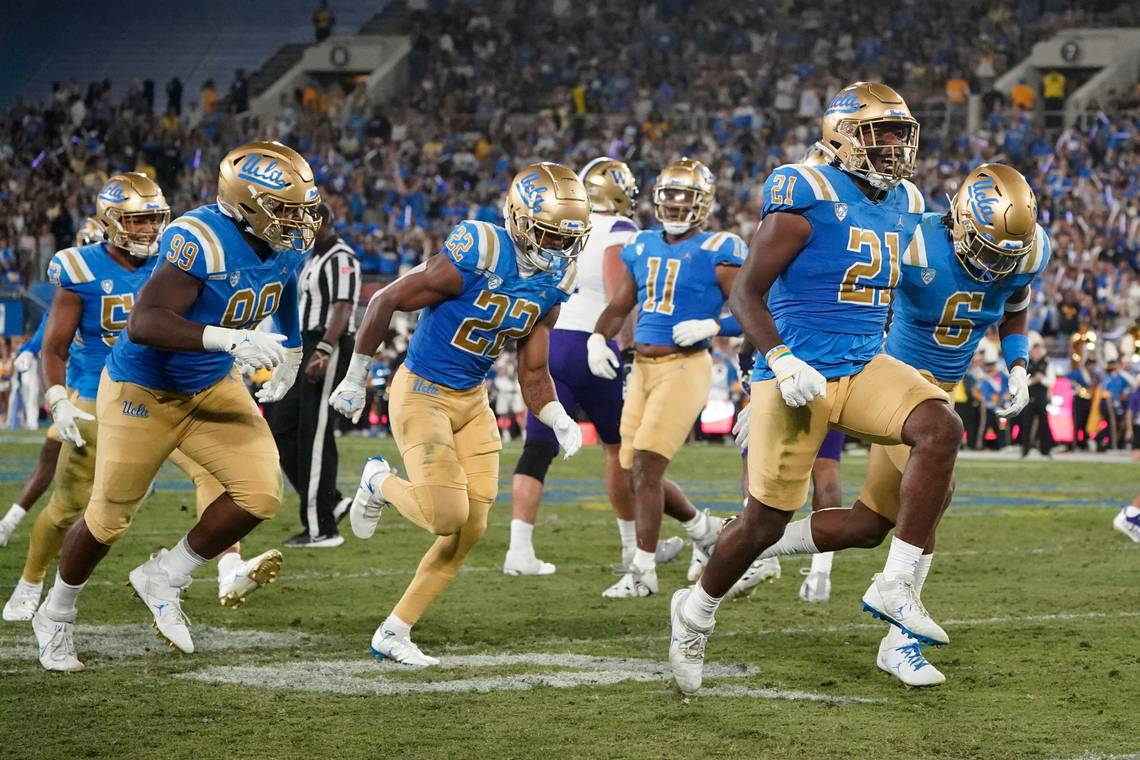 The Huskies made it close down the stretch, but the Bruins’ high-powered offense managed to eke one out and secure the victory at the Rose Bowl.

It took a third down strike from quarterback Dorian Thompson-Robinson to tight end Hudson Habermehl to ice it and keep the clock ticking once the Huskies had burned through their timeouts, just adding to the signal-caller’s big-time performance. With Thompson-Robinson leading the charge, the Bruins didn’t punt until there were fewer than eight minutes remaining in the final quarter.

Running back Zach Charbonnet did his fair share too, taking 22 carries for 124 yards and a touchdown of his own. UCLA averaged 6.9 yards per play on the night, and they needed each and every one of their 499 total yards to hold on for the win.

The Bruins’ defense, meanwhile, had its ups and downs before nearly letting the Huskies back into it, peaking in the first half.

After Washington scored a touchdown on their first drive of the night, UCLA’s defense shut them down for the remainder of the half. The Huskies averaged just 2.56 yards per play between their early touchdown and the midpoint of the contest, with their drives ending in a field goal, a safety, two interceptions and a punt.

Thanks to their defense’s emergence and a kick return by Kazmeir Allen that would have gone for a touchdown if not for a tripping penalty in open space, the Bruins were gifted plus field position. However, UCLA had drives end at Washington’s 3, 6 and 16-yard lines, and they only got a total of three points across those three possessions.

Two of those drives ended with failed 4th-and-short conversions, with Thompson-Robinson needing to throw the ball away under pressure on the first one and Charbonnet getting stuffed at the line on the next one.

The failure to capitalize didn’t totally cost the Bruins, who still led 26-10 heading into halftime, positioned to receive the kick on the other side of the break.

And once they got back on the field, UCLA’s offense didn’t miss a beat.

The Bruins only ran 13 plays in the third quarter, but they strung together two long touchdown drives to eventually go up 40-16. The Huskies scored a touchdown on their only drive of the frame, but they failed a two-point conversion attempt that would have made it a two-score contest.

Washington opened the fourth quarter with a touchdown drive, though, actually converting their two-point conversion the second time around, but there were just 12 minutes left on the clock. The next time they got the ball back – following UCLA’s lone punt of the night – they marched 93 yards and got another eight points.

The comeback bid was real, and the Huskies had all the momentum in the world with less than four minutes remaining. The Bruins bled out the entire clock, though, with Thompson-Robinson rushing for two first downs and passing for another.

Behind Thompson-Robinson’s clutch performance, UCLA secured its first win over a ranked opponent Friday. The Bruins are now 5-0 on the season, and they have an eight-game winning streak dating back to the end of the 2021 campaign.

UCLA will have eight days off before taking on No. 12 Utah at the Rose Bowl on Oct. 8, which could be a high-profile ranked matchup if the Bruins leap up the polls following Friday’s upset victory.