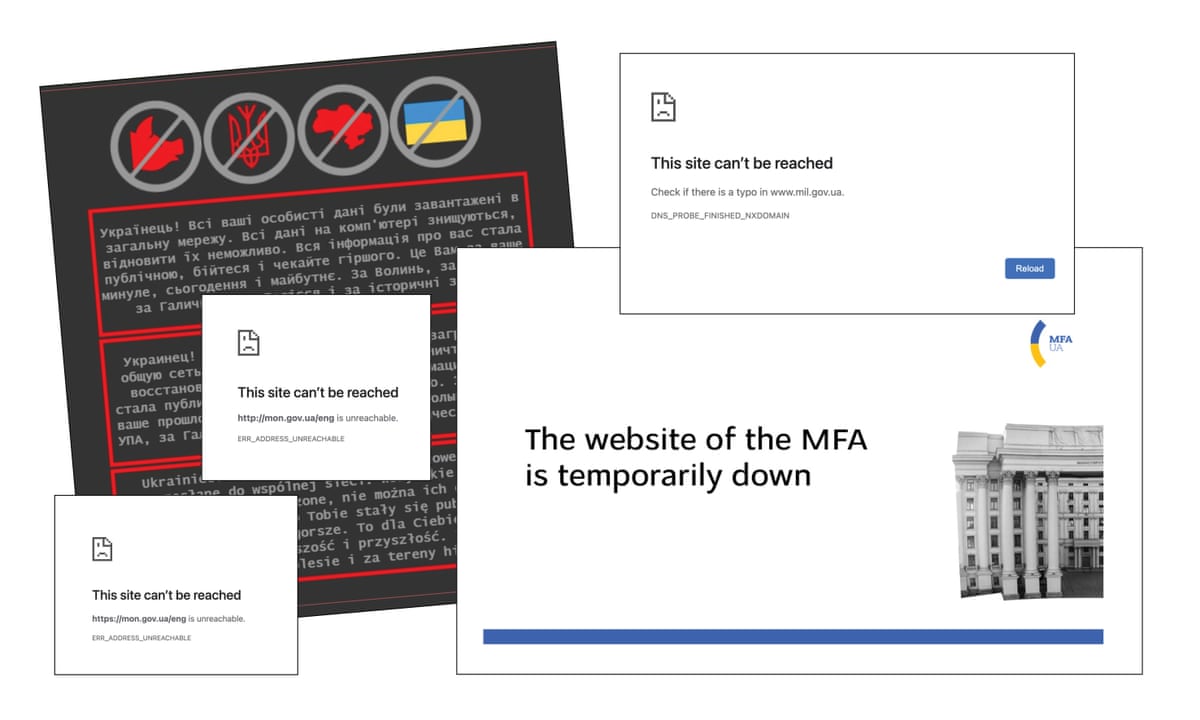 Dozens of Ukrainian government sites have been hit by an ominous cyberattack, with hackers warning people to “be afraid and expect the worst.”

The attack took over websites of the Ministry of Foreign Affairs, Cabinet of ministers and security and defense council, posting a message on screens in Ukrainian, Russian and Polish that read: “Ukrainian! All your personal data was uploaded to the public network. All data on the computer is destroyed, it is impossible to restore it.”

“All information about you has become public, be afraid and expect the worst. This is for your past, present and future,” the hackers said.

“As a result of a massive cyber attack, the websites of the Ministry of Foreign Affairs and a number of other government agencies are temporarily down,” a Foreign Ministry spokesperson said on Twitter. “Our specialists have already started restoring the work of IT systems, and the cyberpolice has opened an investigation.”

Officials in Kyiv have not said who is behind the breach, but in the past, Russian hackers have been blamed for similar attacks in Ukraine. It’s worth noting that similar cyber tactics were employed against Georgian government websites in 2008 during a brief conflict between Moscow and Tbilisi over South Ossetia. And in 2015, Sandworm, a Russian hacking group, hit Ukraine’s power grid.

The attacks come at a time of heightened tensions with Moscow, as about 100,000 Russian troops backed by tanks and artillery have massed on the border with Ukraine in what some observers fear is a prelude to invasion. The Kremlin has denied any plan to invade Ukraine.

The European Union’s top diplomat, Josep Borrell, condemned the cyberattack and offered to mobilize resources to help restore computer systems. “I can’t blame anybody as I have no proof, but we can imagine,” Borrell said in an apparent allusion to Russia.

In 2020, the U.S. Department of Justice charged six hackers believed to be officers in Russia’s military intelligence branch in connection with computer intrusions against Ukraine and Georgia.

In recent weeks, Russia has stepped up a long-standing demand that Ukraine, a former Soviet republic that gained independence after the collapse of the USSR at the end of the Cold War, never be allowed to join NATO. The Kremlin has made a similar demand regarding Georgia.

Russian envoys and European and NATO leaders appear to have made little progress this week toward resolving the differences during talks in Vienna and Brussels.

On Thursday, U.S. Secretary of State Antony Blinken told NPR’s All Things Considered that the U.S. is fully prepared for a Russian invasion of Ukraine and ready to do “things that we have not done in the past” if that should prove necessary.

Speaking of Russian President Vladimir Putin, Blinken said that “it may well be that he’s not fully decided on what he’s going to do.”

“We have, I think, an important responsibility to help shape his thinking and again make very clear from our perspective what the options are, what the consequences will be of the options that he could pursue,” Blinken said.