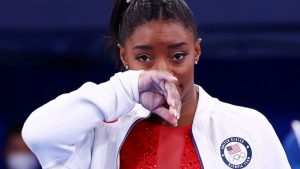 U.S. superstar gymnast Simone Biles, the greatest gymnast of all time, will not compete in the individual all-around gymnastics final at the Summer Olympics on Thursday.

The Olympic individual all-around is the sport’s marquee individual event, and she won by a huge margin at the 2016 Rio de Janeiro Games.

She pulled out of the team final on Tuesday, saying she needed to take care of her mental health.

“After further medical evaluation, Simone Biles has withdrawn from the final individual all-around competition,” USA Gymnastics said in a statement.

“We wholeheartedly support Simone’s decision and applaud her bravery in prioritizing her well-being,” USA Gymnastics added. “Her courage shows, yet again, why she is a role model for so many.”

Biles still may compete in the individual event finals — USA Gymnastics said she’d be evaluated every day to determine whether she’ll take part. She qualified in all four of the events.

Jade Carey, who came to Tokyo as an event specialist, will take Biles’ place in the all-around individual event. Carey had an exceptionally strong showing at the qualifying event, placing ninth overall.

After a rocky opening vault at the team final on Tuesday night, Biles told her coaches that she wanted to bow out of the competition. “I didn’t want to go into any of the other events second-guessing myself,” she told reporters later.

“I’ve just never felt like this going into a competition before,” she said. “I tried to go out here and have fun … but once I came out here, I was like, ‘no, mental is not there, so I just need to let the girls do it and focus on myself.'”

Her teammates rose to the challenge. Two of them — Sunisa Lee and Jordan Chiles — stepped in and competed in events they were not expecting to, earning a silver medal.

The team members acknowledged that suddenly losing their biggest star was stressful, but they expressed total support for Biles. “If it wasn’t for her, we wouldn’t be here right now. We wouldn’t be silver Olympic medalists,” Chiles said.

Jade Carey will step in at the all-around event

Carey, a 21-year-old from Arizona, didn’t compete on Tuesday because she wasn’t selected as a member of the four-person team.

She came to Tokyo specializing in vault and floor exercise, qualifying for the Olympics by racking up enough points at the Apparatus World Cup Series. It was controversial in the gymnastics world when she did not make the four-person team.

At the qualifier on Sunday, Carey had great scores in vault and floor to make it to the finals for the apparatuses. And a strong score in the uneven bars — 14.133 — was enough to put her into ninth place overall.

On most teams, her total score would easily qualify her for the individual all-around final. But each team is allowed to send only two individuals. Biles placed first, and Lee was third overall.

With Biles pulling out, Carey unexpectedly moves into the spotlight for the biggest event in women’s individual gymnastics.