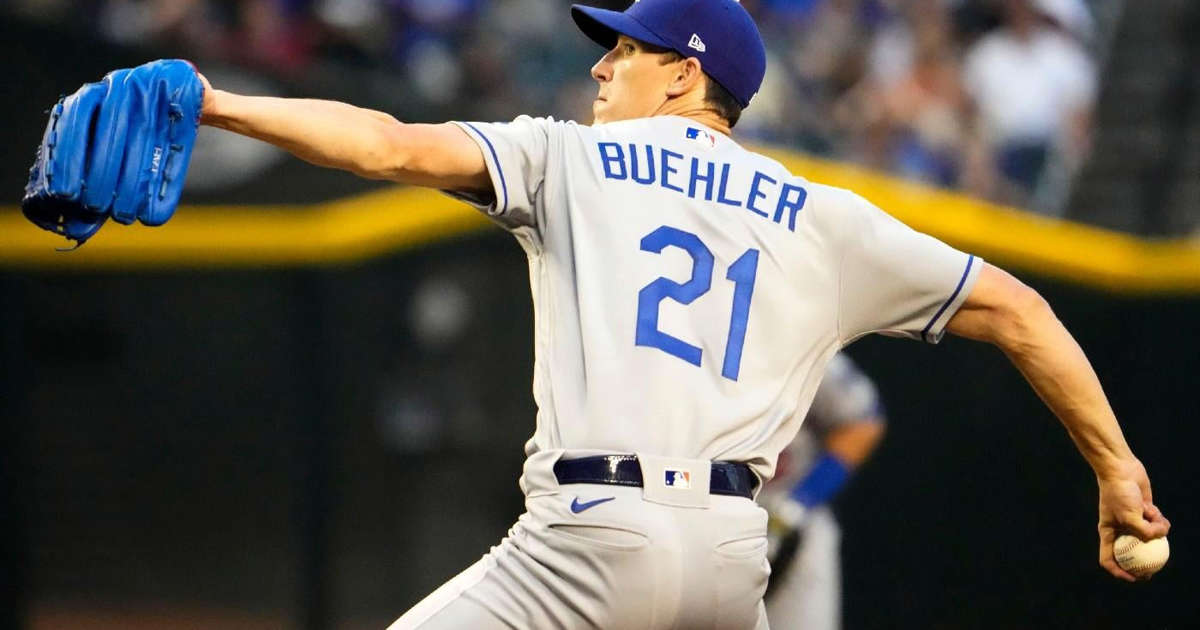 PHOENIX — Walker Buehler didn’t wait for manager Dave Roberts to approach him in the dugout.
As the right-hander passed Roberts on his way off the field at the end of the eighth inning Monday night — nothing but zeros hanging on the scoreboard behind him — Buehler made his intentions immediately clear.

“I’m not coming out of this game.”

Buehler got his wish, returning to the mound in the ninth inning to finish his first complete game shutout in the Dodgers 4-0 win against the Arizona Diamondbacks.

In a dazzling 108-pitch display, Buehler struck out 10 batters, surrendered just three singles and served up an emphatic reminder of why the team has entrusted him to be pitching staff’s ace.

“That’s a big feather in his cap,” Roberts said. “It’s something I know he’s always wanted.”

In his first three starts this season, Buehler had failed to get anywhere near his dominating peak. He had struggled with fastball command. He had tweaked his mechanics. And he hadn’t found the right balance with his pitch sequencing, giving up seven runs in his first 15 ⅔ innings.

In front of a Dodgers-heavy crowd of 17,750 at Chase Field, however, everything changed Monday night.

There were harmless grounders and confused swings against the curveball and slider. The cutter induced weak contact and efficiently ended at-bats. The changeup was key, leading to several punchouts in his 13th career double-digit strikeout game. And the life on his fastball returned, resulting in an unpredictable pitch mix that kept the Diamondbacks slumping lineup all out of sorts.

“It’s a cool accomplishment and good win for our team,” Buehler said in an on-field interview, after becoming the first Dodgers pitcher to throw a shutout since Hyun Jin Ryu in 2019.

Added catcher Will Smith: “He just went right at them, and they didn’t really know what to do with it.”

From the very start, Buehler delivered on an adjustment Roberts had been hoping to see pregame, cutting back on his fastball usage — which still had better velocity, spin and command than in his previous starts this year, but only accounted for one-third of his pitches — in favor of a more balanced attack with his six-pitch arsenal.

“We had a good mix,” Buehler said. “Will kept putting on the right [calls] at the right times.”

Buehler had to navigate some early traffic, stranding singles in the second and third before hitting a batter in the fourth. After that, however, he elevated his stuff, retiring 15 straight before giving up another single with two outs in the ninth.

“I thought tonight was as well pitched a game as he’s pitched in the big leagues,” Roberts said. “He pitched to all quadrants. He used the front to back a lot with the curveball. The changeup was in play a lot more than it’s ever been. It was really fun watching him and Will attack hitters all night long.”

By the end of the eighth inning, the only question was whether Buehler would get the chance to complete the shutout with his pitch count at 98 — especially given the Dodgers cautious approach to their starters’ workloads following a lockout-shortened spring.

“You’ve seen how protected we are here, and I think that’s a good thing and the smart thing,” Buehler said. “But I think I would have been really upset [to not finish the game] … You get through eight, and you’ve never done that, I think it’s kind of hard to not have that emotion.”

Roberts granted the 27-year-old’s command, sending Buehler back out for the ninth and leaving him in even after David Peralta laced a single to right.

At that point, Roberts decided the next batter would be Buehler’s last, regardless of the outcome. Buehler made sure the game went no further, inducing a lazy fly out from Christian Walker on a 96.2 mph fastball (his fifth-hardest of the night) to complete his third career complete game and the first shutout by any MLB pitcher this season.

As the visiting Dodger fans chanted Buehler’s name in a standing ovation, the pitcher smiled and embraced Smith near home plate, snatched the game ball from Justin Turner, then stood in the handshake line next to Clayton Kershaw — whose 15 career shutouts and once-perennial 200-innings seasons set a bar for Dodgers pitching Buehler has taken pride in living up to.

“Kersh has kind of dominated and pushed and been really, really good in a lot of innings,” Buehler said. “I don’t know if it’s a chasing him thing, I really don’t think it is. It’s just a standard of what I want to be able to do, and he’s a great example.”

As they walked off the field Monday, the veteran ace didn’t say anything to the club’s new star pitcher. After Buehler’s resounding display, he didn’t really need to.

“I think he probably knows that it’s my first one,” Buehler said with a grin. “That’s a cool thing, an important thing.”