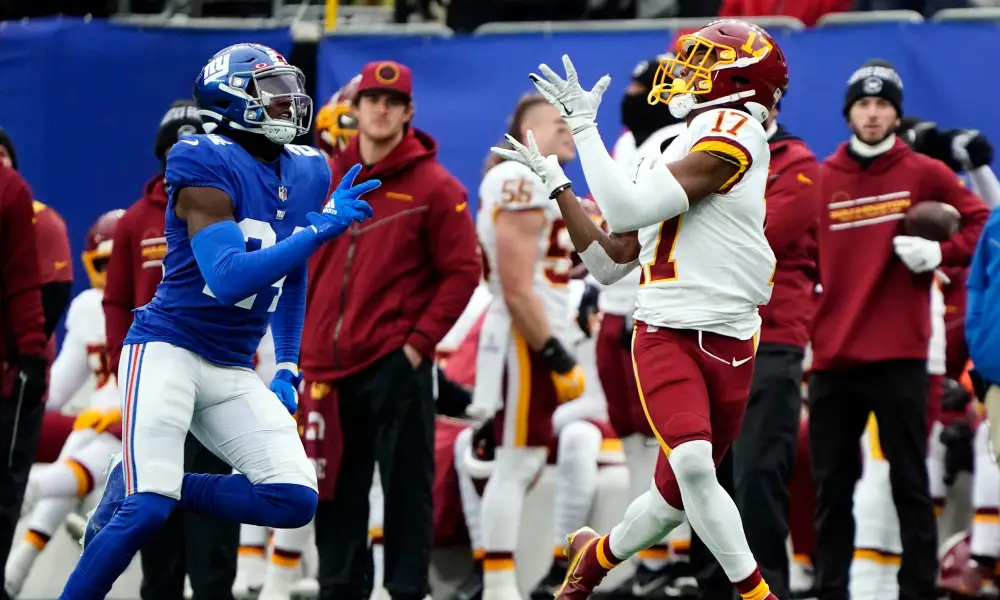 Walking off the field after a 20-all tie was a novel experience for most of the Washington Commanders and New York Giants. None of them seemed to like it.

Commanders coach Ron Rivera was at a loss for words. It was a common feeling Sunday.

“I addressed them and I really wasn’t sure how to address them,” Rivera said. “We came up here and expected to win. We didn’t. We tied. It doesn’t hurt us. It doesn’t help us because these are the guys we are competing with right now.”

“We’ll figure it out,” Giants Coach Brian Daboll said of the muddy result. “There’s a long way to go.”

The Giants (7-4-1) ended a two-game losing streak, while the Commanders (7-5-1) are unbeaten in four (3-0-1) and have only one loss in their last eight games. The teams held the final two NFC postseason spots as the standings stood at the final whistle.

Neither had a realistic chance to score in the 10-minute overtime. Giants rookie linebacker Kayvon Thibodeaux had a blindside sack on Taylor Heinicke at the Commanders’ 1-yard line in OT, but all it did was help set up it a long-shot 58-yard field goal attempt by Graham Gano as time expired.

Gano had hit from 48 and 27 yards in the opposite direction. He estimated his maximum range in that direction was 53 yards. He was spot on. His kick was solid and dropped five yards shot.

“It’s frustrating to tie, you obviously want to win,” said Gano, who played for a Rivera-coached Carolina Panthers team in 2014 that got into the playoffs with a 7-8-1 record. The tie was the difference.

Heinicke threw touchdown passes of 19 yards to Terry McLaurin (8 catches, 105 yards) and 28 to Jahan Dotson that tied it with 1:45 to play. That drive featured Heinicke rolling to his left to hit Curtis Samuel for 20 yards on a fourth-and-4 play from his own 27 with less than three minutes to play.

“As a team it doesn’t hurt as much,” Giants linebacker Jihad Ward said of his tie. “But in Jihad mentality, I treat it like we lost.”

Daniel Jones threw a 6-yard touchdown pass to Isaiah Hodgins, and Saquon Barkley scored on a 13-yard run for the Giants, who are trying to make the playoffs for the first time since 2016.

“It’s not a loss, it’s not a win either,” said Jones, who finished 25 of 31 for 200 yards. “I think you understand that part of it but just disappointed that we could’ve played better, could’ve taken advantage of some situations and won the game. That’s the disappointing part.”

The Giants’ defense set up Hodgins’ first NFL touchdown early in the second half for a 20-13 lead. Linebacker Azeez Ojulari, who came off injured reserve for the game, sacked Heinicke and forced a fumble. Oshane Ximines recovered, fumbled and Ojulari recovered at the 20-yard line.

Washington took leads of 10-0 and 13-10 only to see the Giants tie it just before halftime on Gano’s second field goal. Joey Slye kicked two field goals for the Commanders.

McLaurin scored after breaking a tackle by Fabian Moreau on a short pass from Heinicke. He called the tie a weird experience.

The players had trouble processing the result. The tie “feels like a loss,” Washington quarterback Taylor Heinicke said.

The Giants wore their 1980s uniforms Sunday for what they called a Legacy Game against a longtime rival, and in many ways, the game was a throwback to that decade, before the league was dominated by pass-happy offenses.

Commanders: LT Sam Cosmi left in the third quarter with an ankle injury. C Tyler Larsen was taken off the field on a cart after being hurt in the fourth quarter. Rivera had no injury update after the game.

Giants: Top DL Leonard Williams left in the second half with a neck injury. He said he was going to talk to the trainers after the game.

Commanders: Have a bye and then play host to the Giants on Dec. 18.