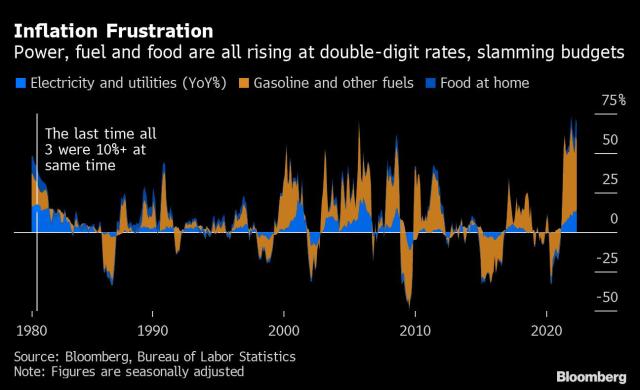 Economists like to strip food and energy out of their inflation calculations. They’re too volatile to be meaningful, they say. But for everyday Americans coping with exploding prices, those items are pretty much all they care about right now.

For two straight months, the primary consumer expenses — fuel, power, and grocery-store food — have all been rising at double-digit annual rates for the first time since 1981. And data out Friday are likely to show a further surge in those unavoidable areas of spending. The Biden administration may want to draw focus to the ultra-low jobless rate to tout a strong economic recovery, but it’s inflation on everyday expenses that has become the topic of conversation at kitchen tables across the country.

“You normally wouldn’t see both of these things happening at the same time,” said Omair Sharif, founder of Inflation Insights LLC, referring to soaring energy and food prices. In the past, any stretch of high inflation in a single category would likely be isolated and pass in a few months’ time, he said. “And now, nothing is well-behaved.”

Some economists had been predicting that March was the “peak” for US inflation this cycle as annual price increases for consumer discretionary items like furniture, apparel and appliances have started to come off the boil. But that’s not the reality Americans are living in day-to-day life, with gas prices around $5 per gallon and grocery prices rising at the fastest pace in more than four decades.

This week’s consumer price index report is forecast to show annual inflation rising at a pace of 8.2% in May, a very slight slowdown from the prior month but still more than four times the levels experienced before the pandemic. “Core” inflation, which strips out those traditionally volatile food and energy categories, is expected to slow a bit more. But food, power and fuel could very well go in the other direction.

If they do, it risks further souring buying conditions for big-ticket items like homes and cars and leaves little wiggle room for households that are already beginning to draw down on savings built up during the pandemic. No wonder Americans are so pessimistic about the state of the economy.

“It’s a little rough,” said Anitrice Jackson, a 59-year-old health-information specialist in Miami whose May utility bill just hit $234, up from $100 or less in a typical month. The grandmother of two has been trying to cut costs by purchasing less seafood and red meat, reducing her car insurance coverage and canceling an August vacation to Disney World with her husband. With bills so uncharacteristically high, “a lot of things we used to do, we can’t do.”

Residential electricity rates have been climbing for months amid mounting natural gas prices and tight fuel supply, and they’re likely to go up even more as summer heat prompts people to crank up their air conditioners. Barclays Plc calculates that monthly power bills will be almost 50% higher than last year. Gasoline is also surging, with US pump prices reaching record highs on a nearly daily basis. Food prices are being pushed up by everything from high fertilizer costs to logistics snarls. The war in Ukraine is exacerbating it all.

David Williams, senior vice president of procurement and risk management at CTI Foods in Texas, which makes prepared foods, said consumers may not feel the full brunt of commodity inflation until the fourth quarter or even next year. “There’ll be a time when we start to see a pullback but we don’t see it today,” Williams said. The Federal Reserve is raising interest rates aggressively in a bid to tame inflation, though any cooldown won’t happen overnight.