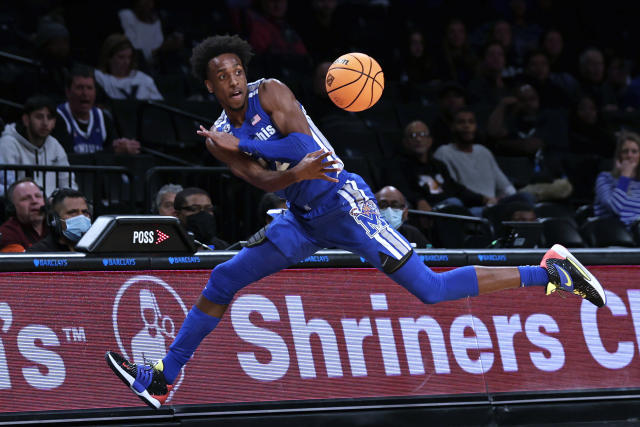 DeAndre Williams had 16 points and 10 rebounds, and No. 9 Memphis outlasted Virginia Tech 69-61 in the NIT Season Tip-Off on Wednesday night.

Emoni Bates added nine points, all in the second half, making four free throws in the final minute for Memphis (5-0).

“I love my team,” coach Penny Hardaway said. “I love what we bring to the table. We can win any kind of game — an ugly game, a good game, and still be right there because of our defense.

While Memphis led for most of the game, the Tigers couldn’t put the Hokies away, and Alleyne made a 3-pointer with 4:36 left to give Virginia Tech a 56-55 edge.

“We just kept fighting,” Alleyne said. “We have to continue to fight every time.”

Following a timeout, Landers Nolley II buried a 3 for Memphis, Bates made a free throw, and Jalen Duren’s layup made it 61-56 with 1:34 left. Memphis then put the game away at the free-throw line.

The Tigers went 7:24 without a field goal in the first half and were carried by their reserves, who scored 19 points in the opening half. Memphis led 33-30 at halftime after Malcolm Dandridge had a buzzer-beating two-handed jam.

“It’s this chemistry with me and Malcolm,” said Alex Lomax, who fed Dandridge for the dunk with a spectacular pass. “We’ve been playing together for a while. I knew it was me and him in a two-man game from the jump. Once I got the steal I knew he was going to run with me. So I have to facilitate and just be aggressive. And it worked out.”

Memphis: It was a night to forget for Duren, the Tigers’ star freshman big man. Duren entered the game averaging 15 points, 10 rebounds, and 4.5 blocks. He was scoreless in the first half and finished with six points and seven rebounds.

“He’s still figuring out his spots on the floor,” Hardaway said of Duren, who turned 18 on Nov. 18. “We’re only going to get better as he gets better. He had a monster game (in) the last game. This game, he did the right things. He’s going to make little mistakes because he doesn’t understand and (the) experience isn’t there but he’s gaining experience every game.

” Virginia Tech: The Hokies had won their first five games by an average of 28 points and were challenged for the first time this season.

“Usually (we) have a much better rhythm. Usually we get some things — and we had cracks at it — around the rim,” coach Mike Young said. “That was the first time we weren’t quite ourselves offensively. Again, Memphis had a lot to do with that.”

UP NEXT Memphis meets Iowa State in the championship game on Friday, while Virginia Tech takes on No. 25 Xavier in the consolation game.