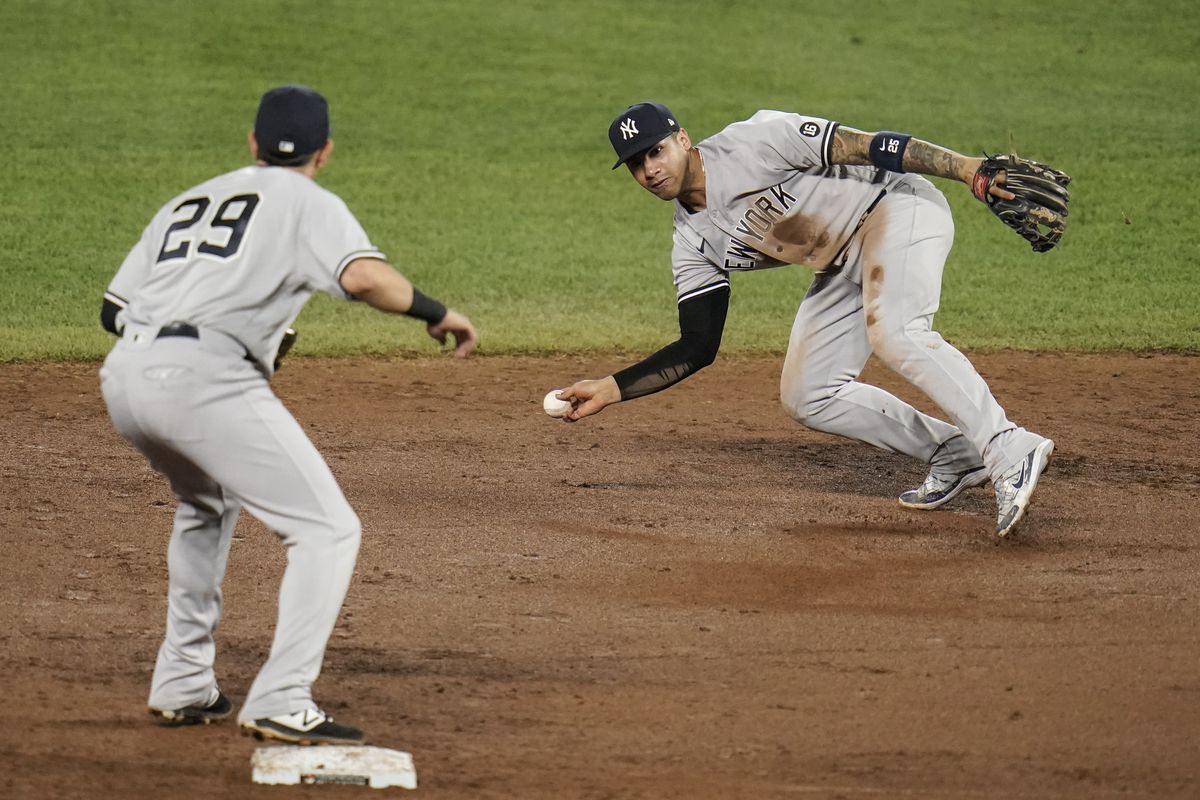 Gleyber Torres isn’t giving up on his future as a shortstop in the big leagues, but he’s not holding out for it either. The struggling infielder said Tuesday he would play second base going forward ― even next year if that is what the Yankees need. He even reminded everyone that he was a pretty good second baseman two years ago.

“The way I played the first two years of my career, I was playing at second. I made two All-Star Games there,” Torres said. “So I mean, whatever that they need. If I need to go back to short next season, I’ll be available, but if not, I’ll stay at second and do my things like the last couple years.”

Tuesday night, however, Torres showed some rust at second base. He bobbled a ball on what should have been an easy double play. Aaron Boone removed him for defense in the bottom of the eighth inning.

“So tonight was… just a number of things. I thought it was the right thing to get him out of there tonight,” the Yankees manager said without expanding on the reason.

“I make too many errors. And I feel that where we are right now, I think we can’t make any, any errors and miss on a game or the playoffs or something like that so I feel really good to move to second,” Torres said before Tuesday’s 7-2 win over the Orioles. “And just want to be part of the things and just try to play better.”

That move came on the heels of Torres committing two errors over the three-game series in Queens against the Mets, including an error with two outs that kept the door open for a three-run homer. He has 18 errors this season, the third most by a shortstop.

The move, however, did not seem too well thought-out, considering the Yankees had demoted their back-up shortstop, Andrew Velazquez, the day before. Gio Urshela, who has struggled all season, was in the lineup at short Tuesday against the Orioles and will get the bulk of the starts there.

Torres had a breakout season playing almost half the year at shortstop in 2019, hitting a career-high 38 home runs and slashing .279/.337/.535 with an .871 OPS. That power was enough for the Yankees to overlook his defensive woes and let Didi Gregorious walk as a free agent and  move ahead with Torres as their shortstop.

Torres has hit 10 home runs in his last 151 games over the last two seasons.

In 2020, the Yankees — and to be fair other teams’ talent evaluators — felt that Torres was just hindered by the fact he showed up after the COVID-19 spring training shutdown out of shape and that resulted in a leg injury.

Boone feels that without the focus on his defensive mistakes, Torres’ offense will improve. Torres admitted there is pressure with being the Yankees shortstop.

“Players feel pressure. I mean, we play for the Yankees. And the way we play is not really working well for anybody, unfortunately I want to do something more for my team,” Torres said. “So, like I say, I will  just be confident at second and try to do my things and try to help my team in a different position and try to be more confident.”

Boone feels that Urshela’s naturally strong glove will translate to shortstop easily. With every game in this 18-game stretch so important, defense is at a premium.

“Gio is a really good defender… And I think earlier in the year when he had to play a little bit of shortstop, I thought he did really well,” Boone said. “I thought even, you know, he was able to make the routine play, but also, I thought he flashed a little more than I even expected from a difficult play or ranging  for some balls. So I feel he’s totally capable of handling it.

“We expect him  to go out there and make all the plays.”

Domingo German, who has been on the injured list since August 1 with a shoulder strain, was making a rehab start Tuesday night and depending on how he comes out of it, the right-hander could be back in the Yankees bullpen by the weekend.

“We’ll see if he’s going to end up needing another one, or possibly even him joining us this weekend,” Boone said. “We’ll just kind of see how it goes for him tonight. See how he responds and at that point make a decision. Do we want him to have one more? Or just bring them with us.

“But I do expect him to be a part of this, sooner rather than later and pitching, hopefully getting some meaningful output.”

Luis Severino, who has not pitched in the big leagues since the 2019 playoffs, is expected to face batters this week, Boone said.