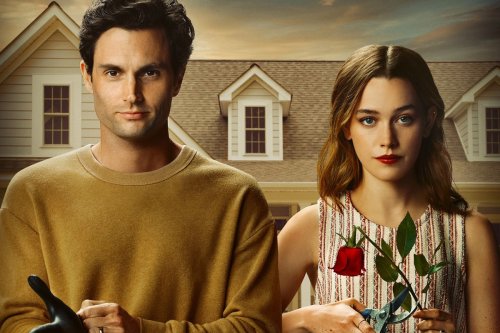 Well, the inevitable finally happened. At the end of You season three, rotten Joe Goldberg killed Love. In retrospect, the season was always hurtling toward this big finish—the only possible outcome of a toxic relationship built on obsession and mutual murder habits.

It was, in the show’s pulpy tradition, a thrilling conclusion, with Joe not only killing Love, but also chopping off his own toes and burning their house down so he could fake his death and conveniently frame Love as the murderous femme fatale of Madre Linda. So, what’s a guy to do after committing multiple homicides, abandoning his infant son, and faking his own death? Go to Paris, of course!

That’s right: season three of You ends with Joe entering his Eat, Pray, Love era. Good stuff. Parfait, even, getting Joe out of the claustrophobic suburbs and giving his life a hard refresh. He doesn’t seem to want to live this way for long, though. In actuality, he’s searching for Marienne (Tati Gabrielle), his latest love (not to be confused with his former love, Love). But after getting a chilling warning from Love, Marienne took her daughter Juliette and fled the suburbs. Joe, as he is wont to do, becomes determined to find her, heading to Paris. “All I know, mon amour, is I’ll search the world if I have to,” he vows as he struts past milling Parisians, the Eiffel Tower looming fuzzily in the distance behind him.

The finale doesn’t give away too much about Joe’s new life, except to reveal that he goes by Nick now and he’s comfy enough in the city to go to a buzzing cafe without a baseball cap on. Apparently his true crime infamy back in the States wasn’t big enough to reach the French papers. But it makes sense that Joe would head to the city of love after losing Love, indulging in all his sick romantic whims. Let’s just imagine what his life will be like there for a moment, shall we? He’ll stroll past bakeries that will remind him of his once-beloved Love, a pang in his chest every time he sees a fresh tart. He’ll dodge American tourists in the Latin Quarter, and quietly linger by murderinos killing time at Père Lachaise. He’ll trade his baseball cap for a beret and then back to a baseball cap when he realizes no one does that.

But while Joe morphs into the living embodiment of a winking “Paris is always a good idea” poster, it seems inevitable that the ghost of Love will haunt him over the course of the next season—in part because Victoria Pedretti was one of the highlights of the show. (“We’re not idiots — we know that Victoria is amazing!” show-runner Sera Gamble told Variety, defending the choice and noting that Love was only ever destined for a two-season arc.)

But Pedretti’s real-life popularity aside, Love has become an object of morbid true crime fascination, a fitting end for the bloodthirsty character. “Once the nausea passed, people were ravenous for her,” Joe narrates, noting that her murderous ways and the “quasi-feminist” way he framed her made her something of a folk hero. The show follows that reveal up by showing a mock feature story in The Cut of the chilling Madre Linda murder-suicide. “Driving past the foundation of the now-demolished Quinn-Goldberg ‘butcher house’ in Madre Linda, I’m struck by how normal it all looks…” the pitch-perfect lede by journalist “Neil Ronald” begins.

Love, in true crime circles, has become posthumously famous. “More famous even than Guinevere Beck,” Joe says, reminiscing on his season one object of obsession—who, in death, becomes a bestselling author. It’s a fascinatingly grim tradition the show is developing, having Joe kill women who become iconic in their death for faux righteous reasons. (And, perhaps unwittingly, a commentary on outsized media fascination with doomed, pretty young white women.) And perhaps it’ll one day be the thing that undoes him, ending his murderous—and now worldwide!—rampage once and for all.